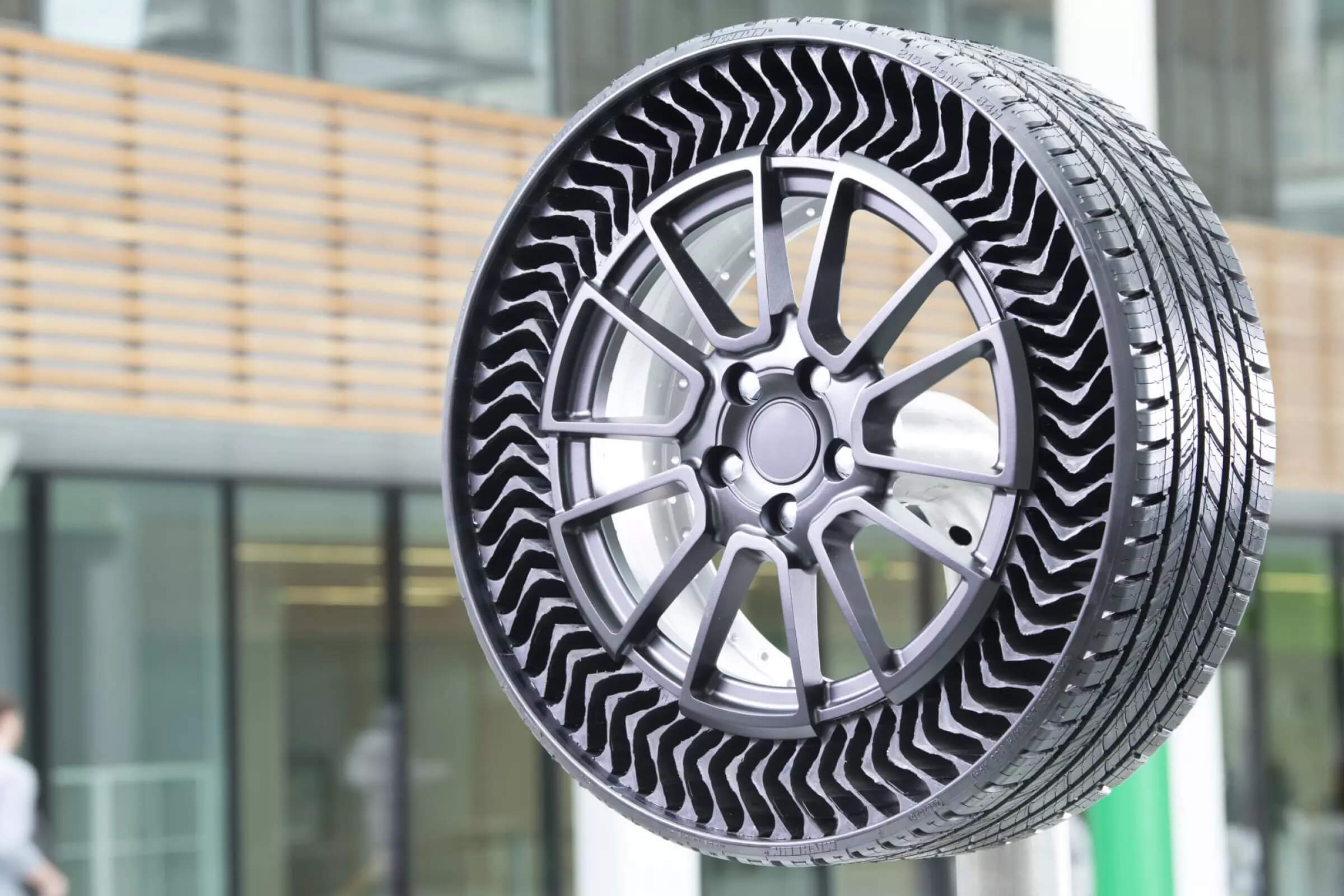 Michelin
Michelin’s Uptis tire, being developed in partnership with GM, places an airless structure on top of a specially designed rim
Michelin

We’ve been reporting on Michelin’s airless tire technology for more than 16 years now. Indeed, the first time we wrote about the “Tweel” back in 2005, it quickly became the most popular story ever for what was then called gizmag.com.

The advantages are pretty clear: firstly, you can never be brought to a stop by a puncture or blowout – Michelin says about 200 million tires every year hit scrapyards early thanks to these. Secondly, you don’t have to look after your tire pressures; that doesn’t just save you time, it also eliminates all early wear caused by underinflation.

Their internal spokes are hugely tunable to meet desired performance characteristics. You can individually tune their stiffness under acceleration, braking, cornering and bump handling forces. The bump handling characteristics can even be tuned to eliminate the need for separate suspension in some types of vehicles.

You can poke holes right through the tread to let water escape, potentially creating much better resistance to aquaplaning. They take less raw material and less energy to make, making them better for the environment, and Michelin has estimated they’ll last up to three times as long as a regular ol’ hoop.

They have obviously not been easy to commercialize, though; 16 years and counting is a long and difficult birth for a product people are clearly interested in. The Tweel, which replaces the entire wheel assembly, has been available for some time for various off-road vehicles, but it’s still yet to make it to the road.

Michelin has teamed up with GM to design and start selling an airless tire for street use on passenger cars. Called Uptis, this product is a full-wheel solution requiring specialized rims. Michelin says it will withstand much greater impacts than a regular tire and wheel, and will have a “dramatically” longer lifespan, while adding no extra rolling resistance, not feeling any different to the driver and adding only around seven percent to the weight of the wheel – less than existing run-flat tires do.

GM will begin offering Uptis as an option on certain models “as early as 2024,” and the partnership is working with US state governments on regulatory approvals for street use, as well as with the federal government.

At IAA Munich recently, the Uptis airless tire got its first public outing, in which “certain lucky members of the public” had a chance to ride in a Mini Electric kitted out with a set. By all reports, the experience was about as exciting as driving on a regular set of tires – i.e. not very interesting at all. They felt no different. But that’s kind of the point here, Michelin is hoping to bring in a new and improved technology with zero change in the user experience.