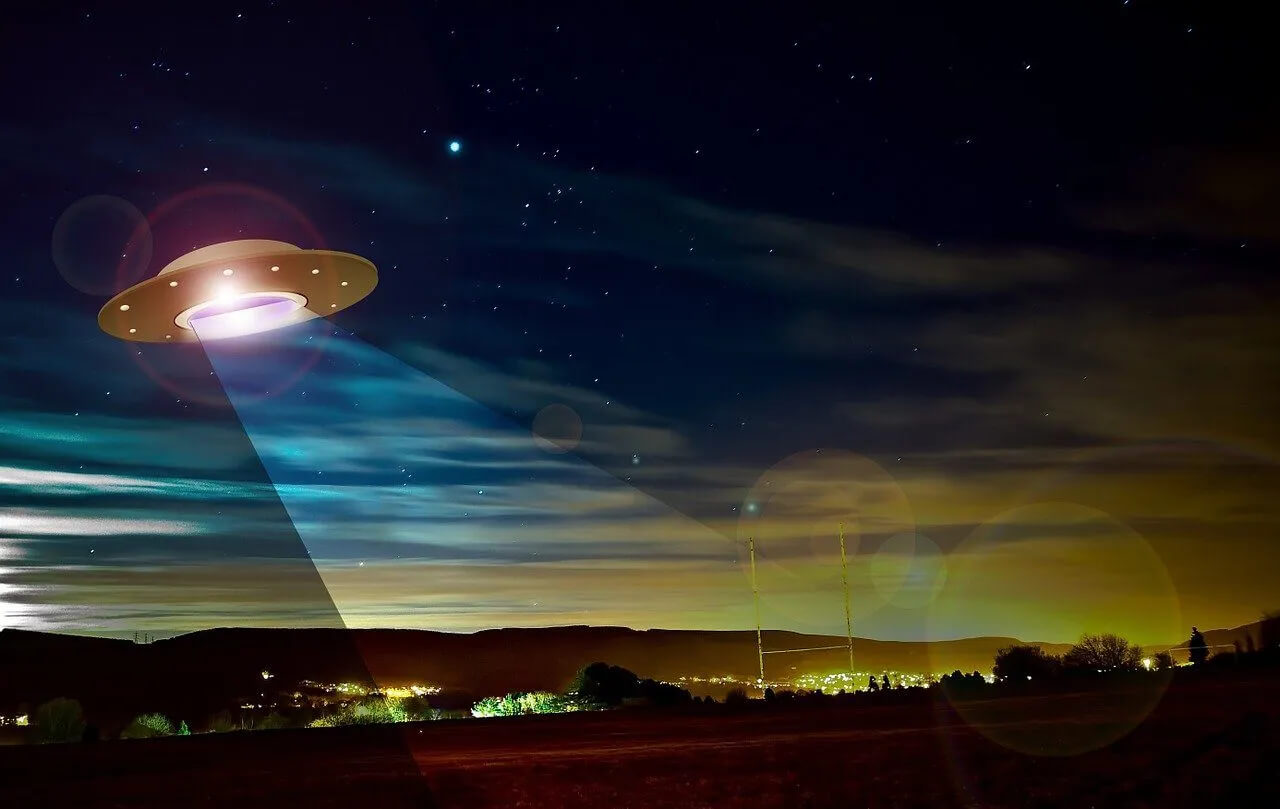 Gwynne Ann Unruh is a former award winning reporter at the Alamosa Valley Courier, an independent paper in southern Colorado. She covers the environment for The Paper.

New Mexico is one of the most UFO-centric states in the country. The 1947 Roswell alien encounter wasn’t just an isolated incident. The Land of Enchantment is listed as the state with the fifth-most UFO sightings per capita in the U.S., in a study from SatelliteInternet.com. From January 2019 to June 2020, New Mexico had 130 sightings in almost every region of the state reported by the National UFO Reporting Center.

On May 5, 2021 it seemed as if aliens might have come to New Mexico again. At 10:30pm strange, bright, blinking lights flying in a very unusual formation were seen over Downtown Albuquerque skies by numerous people.

They may not have been alien life forms, as Elon Musk’s SpaceX took credit for the lights, saying they were SpaceX’s satellites that were part of the Starlink internet service the company is developing. The man made constellation is promoted as low-Earth orbit satellites that deliver high-speed internet service to locations where ground-based internet is unreliable, unavailable or expensive. There is a Twitter video of the incident where you can judge for yourself if you would want to encounter them.

There are still unanswered questions about another incident that happened two and a half months earlier on Feb. 21, 2021, however, when an encounter straight out of “The X-Files,” was radioed to the FAA’s Albuquerque Air Route Traffic Control Center. The incident involved pilots of an Airbus A320 being buzzed by an unidentified, cylindrical-shaped object moving at a high speed, which resulted in them querying the FAA’s Albuquerque Air Route Traffic Control Center. The American Airlines aircraft was headed to Phoenix, and at 1:19pm Central time, while over the northeast corner of New Mexico, flying at around 37,000 feet, the pilot radioed the Albuquerque Center the following message on the Albuquerque Center frequency:

A recording of the pilot’s transmission was made by a self-described “stealth chaser” blogger named Steve Douglass from Amarillo, who accidentally intercepted the transmission as he was trying to pick up another aircraft with a radio scanner. No reply was monitored by Albuquerque back because air traffic controllers “walked over it,” Douglass said on his blog. The air traffic control broadcast from American Airlines flight AA2292 is posted on Douglas’ blog, Deep Black Horizon.

“The FBI is aware of the reported incident. While our policy is to neither confirm nor deny investigations, the FBI works continuously with our federal, state, local and tribal partners to share intelligence and protect the public.”

Scott Stearns, the chief of public affairs at White Sands Missile Range in Southern New Mexico, said, “We have no idea what it could have been or if anything similar has been sighted in that area before. We never test in that area.”

The Federal Aviation Administration spokesperson Ian Gregor confirmed the encounter, stating that, “A pilot reported seeing an object over New Mexico shortly after noon local time on Sunday, Feb. 21, 2021. FAA air traffic controllers did not see any object in the area on their radar scopes.”

Albuquerque Kirtland Air Force Base spokeswoman Lally Laksbergs stated, “We have no knowledge of this. We’re not aware of anything.”

A Pentagon spokesman stated that the Defense Advanced Research Projects Agency known as DARPA, the Missile Defense Agency and U.S. Strategic Command didn’t conduct any tests from the missile range that Sunday.

Holloman Air Force Base, which is also located in the southern area of New Mexico, said they “have nothing at all up there.”

As to what the pilots aboard American Airlines Flight 2292 could have actually seen, the truth is still up for grabs. The description of a missile-like object also fits with documented encounters U.S. Navy fighter pilots had with abnormal objects off the eastern seaboard throughout the last decade. The Dora Military Operating Area is located in the area where the UFO was encountered; however, there are procedures in place if a missile could have “gone off the reservation” during a test, and pilots would have been alerted to the safety hazard.

Other standard military explanations seem very unlikely. The area of encounter isn’t a place where a cruise missile munition would be let loose. The idea that it could have been some sort of clandestine aircraft is also highly unlikely, as it would have been operating during the day and without communicating with air traffic control over unrestricted airspace. The airline pilots would have been alerted to the airspace being “hot” and to other potential conflicts.

The Paper. tried to reach out to the aliens to weigh in on the subject, however as we go to print, we have had no contact.

If you’d like to hear the audio from the flight and read the documents (we don’t claim to know their veracity), head to deepbluehorizon.blogspot.com