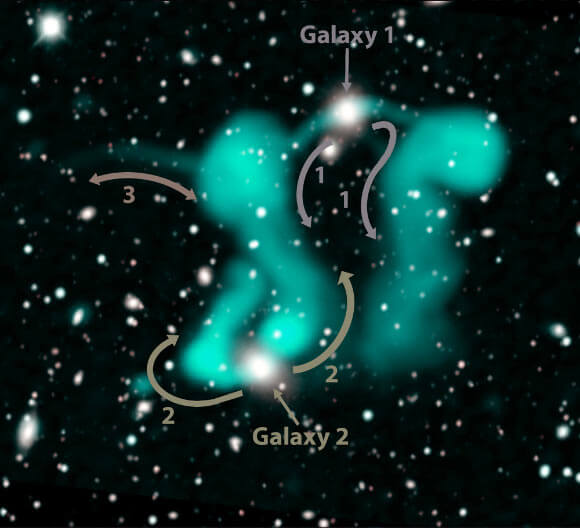 Astronomers using CSIRO’s Australian Square Kilometer Array Pathfinder (ASKAP) telescope, a radio telescope situated about 800 km north of Perth, in the Murchison region of Western Australia, have discovered strange clouds of electrons surrounding distant galaxies. The clouds, which are about a billion light-years away and never been seen before, resemble two ghosts dancing.

The two galaxies Norris et al. think are responsible for the streams of electrons (shown as curved arrows) that form the ‘dancing ghosts;’ but the authors don’t understand what is causing the filament labelled as 3. Image credit: Jayanne English & Ray Norris / EMU Project / Dark Energy Survey.

The discovery of the ‘dancing ghosts’ is one of the initial results from the first pilot survey of the Evolutionary Map of the Universe (EMU), observed at 944 MHz with the ASKAP radio telescope.

“We are getting used to surprises as we scan the skies as part of the EMU project, and probe deeper into the Universe than any previous telescope,” said Professor Ray Norris, an astronomer at Western Sydney University and CSIRO.

“When you boldly go where no telescope has gone before, you are likely to make new discoveries.”

“When we first saw the ‘dancing ghosts’ we had no idea what they were,” he added.

“After weeks of work, we figured out we were seeing two ‘host’ galaxies, about a billion light-years away.”

“New discoveries however always raise new questions and this one is no different,” he noted.

“We still don’t know where the wind is coming from? Why it is so tangled? And what is causing the streams of radio emission?”

“It will probably take many more observations and modelling before we understand any of these things.”

Other objects and phenomena uncovered so far as part of the EMU project include the discovery of the Odd Radio Circles.

“We are even finding surprises in places we thought we understood,” Professor Norris said.

“Next door to the well-studied galaxy IC5063, we found a giant radio galaxy, one of the largest known, whose existence had never even been suspected.”

The first results of the EMU survey were published in the Publications of the Astronomical Society of Australia.