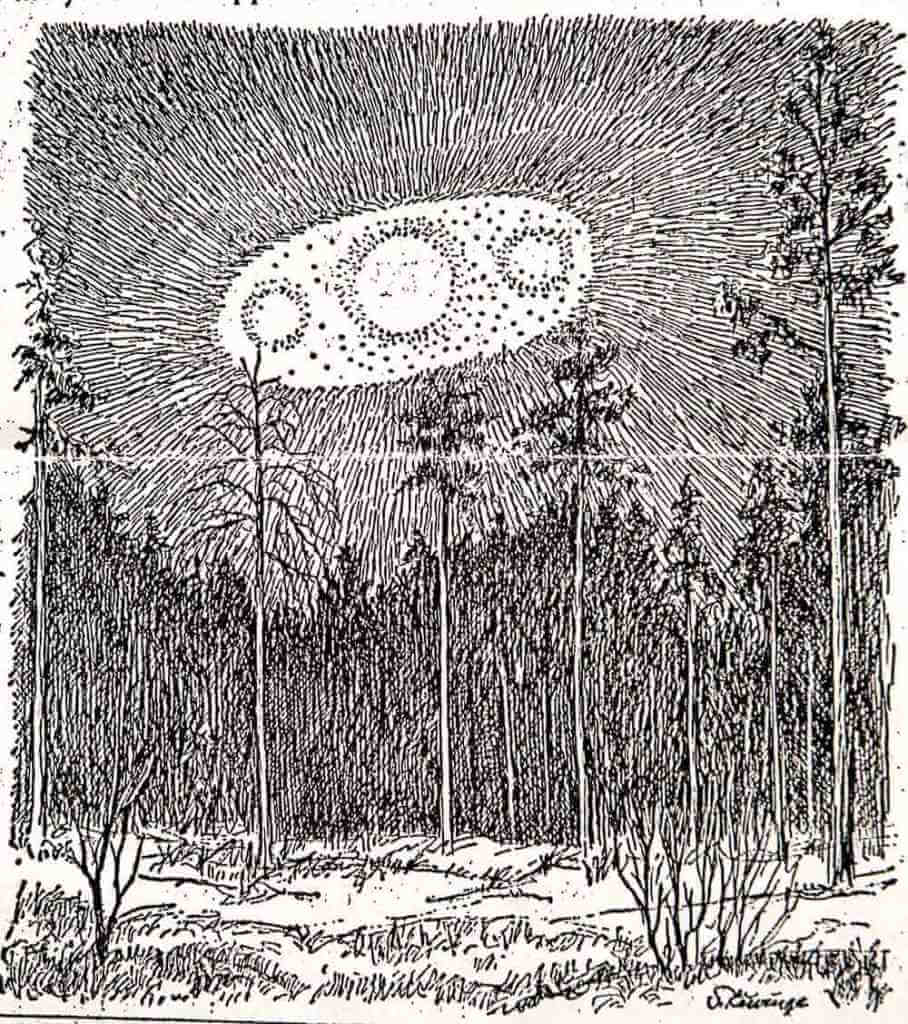 The most famous UFO cases take place in the United States, as the media is actively working on the subject after the famous Kenneth Arnold sighting. But there are other cases from other parts of the world that are as strange as from the United States. In March 1974, something really strange shook the people of a small Swedish town of Vallentuna and left them with memory that would haunt them for life.

On March 23, 1974, Hillevi Andersson of Vallentuna, north of Stockholm, who had turned 36 a few days earlier, was at home with her three children Cecilia, Elisabeth, and Robert. Some of her friends were supposed to turn up but they canceled the visit for some reason. Then she decided to call her parents who lived in Orkesta.

Hillevi called them several times but nobody picked up the phone. Eventually, she got worried and decided to check on them. At around 7:30 p.m., she got in a car with her children and drove to her parents’ house that was located in a deserted area.

While driving to Orkesta, Hillevi noticed a huge ball of light that seemed to be following her car, which was pretty strange. The light followed her until she reached the Orkesta sports field, after that, it reduced in size and disappeared into the sky. Hillevi did not think about it too much but it stuck into her mind. When she arrived, her father Hildor was rather upset with the TV as it was not working properly, and the telephone was out of service.

Hillevi told her father about the strange light that followed her. While she was telling about it, suddenly, everyone saw a bright light on the other side of the road over the trees. What’s more, there was a small ball of light beside it that was moving weirdly. Soon, they found the source of the lights. It was an oval-shaped craft with three beams. This shocked the whole family, and the children started screaming. The series of strangeness did not stop here. After the craft flew away, everyone decided to go to Hillevi’s brother Hilding who lived just 5 minutes away by car. When they arrived there, her brother’s wife met them outside and immediately asked them about the light following their car. Surprisingly, Hillevi had not noticed the light during their short drive.

This made everyone curious about the strange lights. Hillevi decided to leave and her brother took his own car to accompany them. While returning, Hilding’s car was behind Hillevi when a UFO passed over his car. Soon, an oval-shaped object appeared in front of them, hovering just 10 meters above the road. A small orange-colored object was also flying nearby.

Hillevi noticed that the two objects started following her. She parked the car and went out to see what was going on. The object came closer and projected the light over them. Hillevi’s daughter later claimed that some voice told her to go outside the car. After a while, the object flew away, stopped over a barn and then vanished.

The police were not interested in her case, so she called the Swedish National Defence Research Institute (later combined with the National Aeronautical Research Institute). They registered her case, but their UFO administration was skeptical about it. Everything became serious when other people also reported seeing UFOs

From March 23 to 24, the police collected 76 reports from 31 witnesses from different locations in Vallentuna. All of them described that the object had an oval shape or was sometimes described as egg-shaped. The sightings were recorded for 43 days during the spring of 1974.

On March 23, at midnight, school janitor Gösta Hägerr was visiting some friends in the parish home in Markim. When he went out to breathe some fresh air, instead of going back, Gösta started walking away from the home to the forest road. He described it as if he was under the control of some invisible power. It was a cold starry night.

Along his path, he saw a dazzling light that appeared on the left side of the road. The light gradually increased in intensity and became moving faster towards him. To avoid being hit by the strong light, he quickly moved to the side and fell into a ditch. He had no memory of what happened after that. Next, he was standing in front of the door of his house in Lindholmen. When his wife opened the door, she was shocked by his wounded face and a bleeding wound on his head.

Gösta went through two hypnotic regressions later that year. He recalled that he had been taken into a craft where he was examined by four semi-transparent men (later described as Native Americans). The beings gave him a mission, but he was vague about the details other than this mission might happen in the year 2000. According to Gösta, they also put some kind of instrument against his forehead, which caused a burning pain. However, in his hypnotic session, he claimed to have been abducted by some beings but resisted calling them aliens.

Hillevi was also offered to go through hypnotic regression but she refused, as she did not suffer from any memory loss.

A representative from the National Home Defense, Hardy Bornholm went to the site with Hillevi and her husband where she saw a craft with three beams. Bornholm found three small wedge-shaped marks in the ground, and several trees had lost their tops. Later, the site was investigated by experts, who even took samples of burned grass and soil.

According to documents from the Swedish National Defense Research Institute, it was concluded that there was an alleged physical object over Vallentuna that night, but no one could come up with a logical explanation.

What’s more, the first sighting over the area happened on New Year’s Eve in Torsholma, less than 10 kilometers from the later incidents. Some friends were walking back home when they saw a big cigar-shaped object with the strong luminous light and a row of windows came floating above the ground and stopped by the edge of a forest.

More than 40 years after the events, the memory of the Vallentuna UFO wave remained.