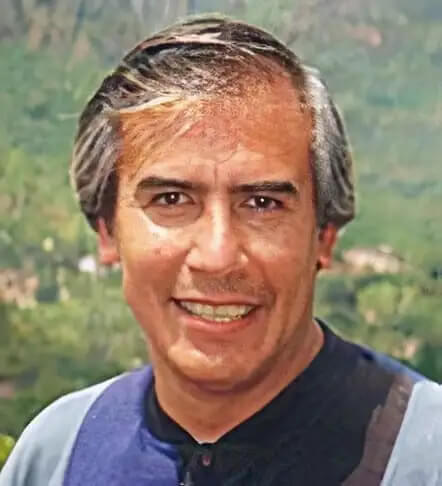 In the history of UFOlogy, there are several cases of alleged encounters with extraterrestrials, and people who claimed to have contacted them are known as “contactees.” We cannot deny the fact the UFOs are real, while the existence of aliens is still questionable. Mexican photographer Carlos Diaz’s case is considered to be one of the UFO stories where the witness not only encountered the UFO but even took its photographs.

In January 1981, Carlos Diaz Martinez was waiting for a journalist at Ajusco Park near Mexico City as he was on an assessment for some magazine. It was the early morning, he was inside his car, preparing his camera for his work. While Carlos was expecting to see the journalist, he looked out of his window and suddenly, his attention was caught by a strange yellow glow in the sky, coming from the valley.

At first, he thought it was a forest fire but as the object began approaching him, he saw a large, orange, oval-shaped UFO. Fortunately, Diaz had already prepared his camera and was in a perfect spot to take photos. As he began taking the shots, his car began shaking violently.

He went out of the car and continued taking photographs of the object before it flew straight up and disappeared. Diaz was in a state of shock and at that time, he had not even the slightest idea what he had witnessed. He kept returning to the same spot several times in the hope to see that object again. His wish to see the object came true in March of the same year. Once again, Diaz spotted the bright orange glow over the valley and also observed the object carefully through the fog and rain that saturated the forest in Ajusco Park. As he explained, that time the object appeared to be “dome-shaped with a smooth ring in its center, and covered with a number of half-spheres, each around one meter in diameter.”

While he was looking at the object, he felt some sensation and lost consciousness. Later, he claimed that when he woke up, the UFO was gone and his clothes which had been wet because of the rain got dried. He noticed that there was another car parked in front of his car, and a blond humanoid entity approached him and told him to return to the same spot the following day to get answers to his questions.

Following the entity’s instructions, Diaz returned the next day and found the entity sitting on the grass. The entity told Diaz that it was him who grabbed his shoulder. Diaz also learned that the humanoid had come from the craft.

What happened with him during the time he was unconscious? Well, for the following months, his memory continued returning back in bits and pieces. He recalled that the craft had been hovering over this head, and he even attempted to touch it. He also remembered that he had seen a craft landed in a giant cave. He described the inside of the cave as: “It was full of stalagmites, some of which were carved into what appeared to be Mayan sculptures. I saw many people in the cave, some of whom waved to me and, in a state of shock, I waved back.”

Then, he was then taken to another cave inside the first one where he saw glowing, egg-shaped orbs and then stepped into one of them. Diaz found himself in some place like a forest. He said: “I could see all the details of the forest as if I was walking through it. I couldn’t touch anything, but I could feel the temperature and moisture. I could see and experience everything, yet I wasn’t physically there.”

After that, he was brought back to the first cave and then to his car. He was told by the entity that he received some mysterious knowledge. Diaz claimed later that he had been contacted by the entities several times and traveled through those orbs all over the Earth. According to him, the aliens taught him that his mission was to help the Earth’s ecology. Diaz’s case attracted many researchers and UFO experts who studied his photographs and could not deny their authenticity.

Mexican TV journalist and UFOlogist Jaime Maussan believes that Diazepam UFO photographs are among the most impressive he has seen. His images were checked by an image processing expert Jim Dilettoso at Village Labs, in Tucson, Arizona, who concluded they were genuine.

German journalist Michael Hesemann had been investigating Diaz’s case for seven years and concluded that it is completely genuine. He said: “Since I wanted to be sure before I publish the case that any possibility of a hoax can be excluded, I did not only travel to Mexico twelve times for on-site field investigations but also consulted leading experts in the US, Belgium, Germany, and Italy.”

Colin Andrews, another UFO researcher, best known for his research into the crop circle subject since 1983 flew to Mexico for 10 days in 1995 to perform his own investigation into the Diaz case. Diaz explained to him that “just before he went inside the UFO, he was told by ‘them’ that he could only enter through the sides of the craft and through the yellow segments not the red.”

Carlos Diaz’s UFO encounter is one of the most discussed cases from Mexico. However, it could not be reached globally due to a language barrier. Still, the facts and evidence told by Diaz are reliable, which make his case outstanding.