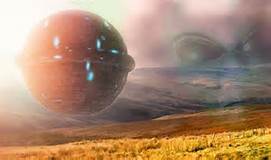 UFO sighting: ‘Glowing sphere’ over Saddleworth stuns UFO hunter – ‘Sounds odd but true’ #ufo #alien #nasa The UFO or unidentified flying object was seen over Saddleworth moor in North West England. Avid bird watcher Alan Jones, 49, of Delph saw the UFO in the early morning hours as he sat in his car at Bleak Hey Nook. At about 5.30am, Mr Jones heard a “whoosh sound” followed by a bright light in his rear view mirror.

According to The Oldham Times, he saw the UFO orb rise from a ball of light before it turned red and vanished into the skies.

Mr Jones compared the sound it made to a plane that has just landed.

He said: “I know it sounds incredible, but this is what I saw.”

UFO sighting: An expert has linked the event to another incident in Cornwall (Image: GOOGLE/SCOTT WARING)

Mr Waring shared the encounter on his blog ET Data Base in a post titled Glowing Sphere Seen Over Saddleworth.

He said: “Here is another UFO seen over the UK.

“It is a perfect orb and was seen shooting across the sky at 5.3am.

“The object seemed to make a whooshing sound as it passed, which would mean its mostly silent except for the gusts of wind passing around it as it speeds up.

“Lots of alien activity in the UK this week. It looks like something big is about to happen over there, so if you are in that area, keep an eye out.

Mr Waring also suggested the UFO sighting could be linked to a possible UFO landing site found in Cornwall.

“The most common time of the day to catch a UFO is sunrise or sunset. Sounds odd, but true.”

Mr Jones took a photograph of what he saw and the photo appears to show a bright yellow orb in the top left corner.

But a bright source of light in the lower left suggests the yellow orb could be camera lens flare and not an alien spacecraft.

Regardless, Mr Jones said: “I’ve seen some strange things on Saddleworth moor but I’ve never seen anything like this. It was amazing.”

UFO sighting: The glowing sphere was seen at about 5.30am over Saddleworth Moor (Image: GETTY)

The former design manager also hinted at the possibility of alien life somewhere beyond Earth.

He said: “I’ve never thought about whether there is life elsewhere in the Universe, but judging from what saw on Sunday morning, it’s got to be a distinct possibility.

“It was beautiful morning with mist hanging over the landscape, and this thing came out of nowhere.”

Most experts would, however, agree there are perfectly natural explanations behind UFO sightings.

A common explanation is the sighings are the result of pareidolia.

Pareidolia is a bizarre trick of the mind that causes people to see recognizable shapes and patterns where they do not exist.

Pareidolia can cause people to see animals in clouds and smiling faces in car bumpers.

The US space agency NASA said: “Pareidolia is the psychological phenomenon where people see recognizable shapes in clouds, rock formations, or otherwise unrelated objects or data.