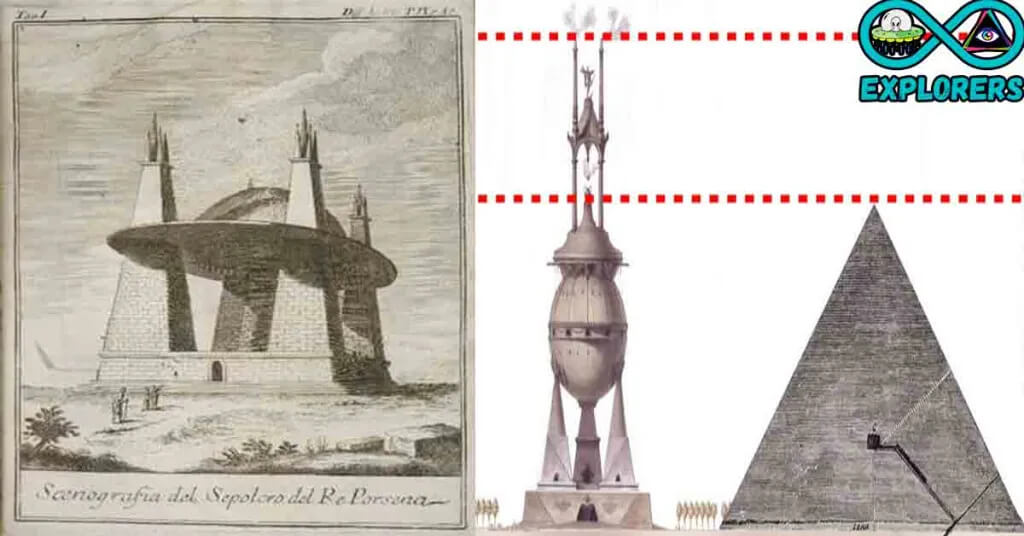 The tomb of Lars Porsena looked like a flying saucer on a launchpad atop five pyramidal pylons or obelisks.

But before fans of ancient astronaut theory get excited, let’s take a closer look at its legendary occupant: Lars Porsena, ruler of the city of Clusio, from the late 6th century BC, who came into conflict with a fledgling Rome after the revolution it overthrew. to the monarchy in this city.

Tarquinius the Proud, the last king of Rome, who was of Etruscan origin, appealed to Porsena, to end the early Roman republic, and the latter agreed to help him. He presented himself with his army at the gates of Rome, and at this point, there is divergence in the historical sources.

According to the mainstream, including Livy, Porsena, impressed by the brave resistance put up by the Romans, opted for peace and withdrew. According to other sources, on the other hand, he attacked and captured the city, and the Etruscans could only be expelled later.

In any case, no source suggests that Tarquinius the Proud could regain the throne. If Lars Porsena succeeded in conquering Rome, it was to his own advantage.

The Tomb Of Lars Porsena: A giant grave for a giant character

It is almost a no-brainer that a monarch and military commander of such a rank received a suitable burial, and in this case, it seems to fill all the boxes for a cyclopean ancient marvel.

This is how Marco Varrón describes the mausoleum, cited by Pliny the Elder:

Porsena was buried below the city of Clusio, where he had built a square monument of carved stones. Each side was three hundred feet [c. 90 meters] long and fifty [c. 15 meters] high, and below the base was an inextricable labyrinth, from which no one who ventured without a thread track could find their way out.

Above this square building are five pyramids, one in each corner and one in the center, each with 75 feet [c. 22 meters] wide at the base and one hundred and fifty feet [c. 44 meters] high. These pyramids are so narrow that a bronze globe and a petaso rest on all of them, from which the bells are suspended by chains. They make a clink when blown by the wind, as was done in former days at Dodona.

Four other pyramids sit on this globe, each 100 feet [c. 30 meters] high, and above them is a platform on which there are five more pyramids, the height of which Varro was ashamed to mention. Etruscan fables record that it is the same as the rest of the structure.

But why haven’t we heard more about this majestic tomb? The first reason is that this structure, about 200 meters high in total – taller than the Great Pyramid (139 meters today) – was supposedly destroyed along with Clusius itself in 89 BC by the Roman general Cornelius Sila.

The second is that precisely what is cited on these lines is the only historical reference that exists on it. Furthermore, no trace of it has ever been found, and historians generally regard Varro’s account as a gross exaggeration at best.

Others, like Angelo Cortenovis (18th century), proposed that it not only existed and was a tomb, but also a machine for conducting lightning.

And it is that, after all, although complex it is not an impossible construction. And no one can doubt that a magnificent tomb was erected for Lars Porsena, the mighty warlord, whose name sowed terror in Rome, and whose victorious weapons, were it not for his own magnanimity, might have swept her off the map of Italy.

Perhaps, a certain Roman resentment could be the main cause that, later, the mausoleum of Porsena was destroyed and some references of it disappeared… at least from the surface. Because the intricate labyrinth under the structure may still be there, hidden by many meters of land in central Italy and waiting for someone to discover and enter it.