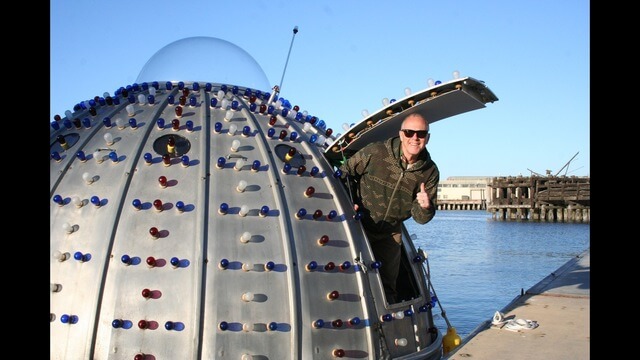 When the rest of the world is setting off firecrackers high in the sky, 69-year-old Eric Staller hopes to be wowing the crowd on the San Francisco Bay, dazzling onlookers in his wacky Bubbleboat, a converted farm silo set on aluminum platoons festooned with 600 twinkling lights.

“I always like to flash around Pier 39 and the Embarcadero,” Staller said in a recent interview. “I jfust like to see the looks on people’s faces, like ‘What is THAT?’’’

Staller, an author-architect-artist, has been buzzing about in his Bubbleboat in San Francisco, mostly near McCovey Cove, since 2013, when he relocated to the Bay Area from Amsterdam by way of his native Long Island. That’s where he was first commissioned to create the boat in 1986 by Sylvania lighting company for Liberty Weekend in the New York Harbor. Staller said he was paid $60,000 to create the fun piece, which he categorizes as one of his many “Urban UFO” projects. As part of the deal, he got to keep the Bubbleboat for the rest of his life.

While he’s created a lot of art for projects around the world, it’s the Bubbleboat that probably gets the most attention.

“I have seen him four or five times with that thing,” said Jason Steinkller, 41, a painter from Vacaville. “And usually, I can’t pull out my phone fast enough. This time I was able to get him on video. I wanted it because no one would believe you if you said you saw a ball in the bay. I’m usually like, ‘What the heck is that thing?”

That’s just the reaction that Staller, who holds his architectural degree from the University of Michigan,  is going for when he creates his public art. That includes the Lightmobile Volkswagen bug he created and drove around New York City, Chicago, Berlin and Japan starting in the mid- 1980s, to his patented Conferencebike that seats seven and was featured on the fictional  Hooli campus in the HBO show, Silicon Valley.  Google bought a dozen of those bikes in real life, he said, at a cost of $13,000 apiece. Staller also is the mastermind behind Spirogyrate, the interactive children’s $300,000 play area in Terminal 3 at the San Francisco International Airport. And sometimes Staller even becomes part of the piece himself.  Perhaps you’ve seen him dressed up as Donald Trump, as he walks alongside a remote-controlled wheel of vintage Stormtrooper boots?

“I want people to feel  delight, joy, astonishment,” Staller said, agreeing that he might be likened to the quiet but whimsical character, Willy Wonka. “I want to stimulate thought and challenge people to use their imaginations. I feel like we’re socialized out of these childlike responses. “

Staller has created art for museums and galleries, but he said he became “disillusioned by the commercialism of the art world. I wanted to bust out of those confines and use the whole world as my gallery.”

Staller admits that his wild contraptions are a bit of “compensation” for his personality. “My art is my alter ego of a shy and introspective person,” he said. As for his inspiration, he said growing up on the Atlantic Ocean gave him the opportunity as a young boy to stare at the horizon and wonder “what’s out there?” And that has been the inspirational question for him ever since.

Answering that question helped him to conceive the Bubbleboat, a 12-foot diameter dome fashioned out of a farm silo. He then attached the dome to a custom-made aluminum pontoon hull, attached to a 5,000-watt generator alongside two outboard motors. Staller says the boat comfortably fits two or three and he always tries to invite a guest.

“Everyone gets a kick out of it,” he said. “You feel kind of like an alien. Especially when I’m approaching the Ferry Market with outdoor cafes and you see astonishment on people’s faces. I like to see that.”
What he also loves is the sense of community his art fosters.  If he drives the Lightmobile, or motors around in the Bubbleboat, people start to “gather around and make conversation. Some people have brought a boom box and just dance. Thousands of people have thanked me for coming to their neighborhood with my creations.”

Staller’s son, Julian, 28, a chef, said that sometimes his dad almost intimidates people because he is such a “larger-than-life character.”

But overall, growing up with that character was a blast.

“As a dad, he’s more like a friend,” Julian Staller said. “We have always done fun things together, like traveling.” As for riding around in his father’s Urban UFOs, Julian Staller said, “It is a lot of fun to creep up on people and scare them.”

Julian is Staller’s oldest child. The artist also has a young daughter with his second wife, a Dutch filmmaker.

As for what’s next, Staller has no intention of stopping. While he may be done creating his Urban UFO series, at least for now, the artist is now embarking on building-size masterpieces. He is currently working on a project that will be both architecture and art.

“I’m coming full circle,” he said. “These buildings will have whimsical elements and surprise, they will not be ephemeral. Hopefully they will live forever.”