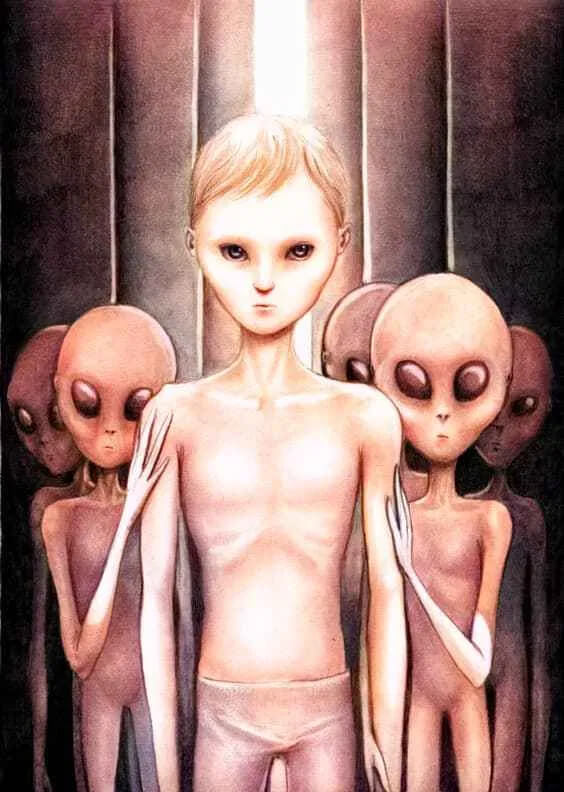 There are dozens of alien contactees who claim that they either visited the extraterrestrials’ spaceships or were contacted by aliens physically & mentally. But the story of Nadira Duran of California began even before her birth. She is also known by her spiritual name, Azi-Azon, which simply means “Ancient.” She basically called herself a spiritual medium (or a channel), who is here to deliver the message of higher beings (Greys & Angels) to save humans from self-destruction. Besides, she is known for her healings, using Tarot, palmistry, giving classes, and lectures.

Before she was born, a huge white light had visited her parents and instructed them on how to raise her. They were told that heavenly beings would give their daughter spiritual knowledge for healing humans. When she was born, her face was covered with two veils (normally, there is one that rarely occurs fewer than 1 in 80,000 births), and after the nurse removed it, she saw her skin glowing and called it a “magic skin.”

At that time, her parents lived in a desert in California, and many people wanted to see her magic skin which lasted for 10 days, but her parents were very protective, so they left the place and went to her grandfather’s house in Oregon. Nadira lived there among the farmers and loggers and often went on exploring the place with her younger brother. She said that she had been visited by a not very tall ET many times (whom she designated as the “Cat Man”) when she was only 5 or 6. But it came only in summer, not in other seasons.

“I was small for my age and he had a round face he had curled up eyes very small just like little slits that curled up oh he had yellowish skin which was rough and bumpy you know how you get goosebumps. This is how his skin was and then he had big yellow spots and then from here he had these wild what I thought was hairs they could have been some kind of feelers or something but in my mind’s eye I have always referred to him as a cat man,” Nadira said.

She had lots of conversations with this ET, and he shared some highly advanced information with Nadira which could only be revealed to the future generation. She learned spirituality under the watchful eye of archangels Micheal, Gabriel, Raphael, Sunder Singh, etc. She accepted that she had no power on her own, and whatever she got was taught by the spirits she applied in healings. Moreover, she does channelings.

Nadira had an interesting incident in her life when she was in her twenties and went to San Francisco with her friend Mary on a business trip. Inadvertently, they found themselves on the wrong way while returning. Mary noticed that they were heading to the Golden Gate Bridge which was not in their path. They felt like under hypnosis of something. The night was clear, but the bridge was covered with a thick fog, and there was no sign of people on it.

Mary was trying hard to accelerate the car, but it did not go fast. Then Nadira looked out of the window and found themselves above the bridge. Her friend’s reaction was rather positive than being shocked. That’s it, she only remembered the part of being lifted up but did not see any ship or light. Next, they were parked somewhere near a hotel and sitting for long in a car till the next morning. What they had witnessed was actually a “Lost Time.” They had no clue what had happened but they lost around 13 hours.

Nadira already knew that they had been abducted by the aliens but did not want her friend to know about it. Somehow, Mary’s boyfriend did hypnosis on her and shockingly, she recalled everything that had happened in those lost hours.

Anyway, they both never discussed it, and years later, in the mid-1980s, Nadira went for a laparoscopy. Her tests were normal, everything was fine but her gall bladder and a rib were missing. Interestingly, she thought it was a mistake because she had never had any surgery, and there is no surgery mark on her abdomen. Later, she recalled her abduction that had happened in the 70s and then found out that an advanced ET technician had removed her gall bladder for goodness. What’s more, she met an alien on the ship, whom she called the “Commander.”

The Commander told her that she was special, not like others. The ship had panels with symbols like ancient languages, and each symbol represented different universes. The Commander took her on a ride to a universe where she saw a purple and pink planet with beings on it. They were smaller in size but had no flesh on their body. Then she returned to the place where they began.

Nadira had many contacts with the Commander who was actually a female Grey alien in a special bodysuit and face mask. The alien told her that their bodies were very fragile, and any germ or bacteria from her could kill them. Their race had a very weak immune system, they had lost the ability to give birth, their women could not get pregnant and outnumbered the men. So, to strengthen her (Grey) race, they had been mixing themselves with humans.