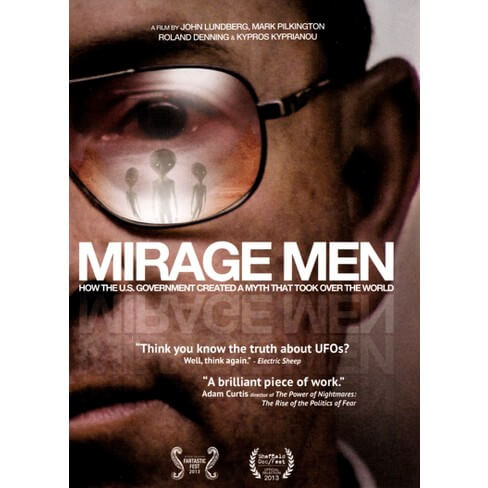 Your mileage may vary with this one, depending on how much stock you put into Bob Lazar and his famous story. For those of you who don’t know, Bob Lazar is perhaps the most notorious alien conspiracy theorist in the world, as he claims to have both seen aliens and worked on alien spacecraft near Area 51. And even though his story has been tossed aside by both skeptics and ufologists, this doc about his claims that aired on Netflix gave him a monumental platform to spread his story. For newcomers looking to explore one of the most popular extraterrestrial conspiracy theories ever, start here.

You may know Shaun Ryder as the frontman for Happy Mondays, a rock-dance indie group that was extremely popular in the UK in the late ‘80s and early ‘90s. What you may not know is that he claims to have personally encountered aliens. His lifelong obsession with the idea of extraterrestrials led to a documentary where he interviewed people who have also claimed to have seen or been abducted by aliens. It’s not really convincing if you don’t believe in aliens in the first place, but regardless of your views on that, no one can deny that these stories are hella entertaining.

“Mirage Men” is a different kind of UFO documentary and is all the more interesting for it. It follows the titular government agents, specifically retired Special Agent Richard Doty. Doty worked for the United States Air Force Office of Special Investigations and claims that he and his team helped perpetuate and spread UFO mythology. They did this by spreading misinformation and manipulating famous ufologists, all to draw the public attention away from clandestine Cold War technologies and experiments. The government has always claimed that aliens do not exist. Regardless of whether or not that’s true, they leave out an important part of the story – they’re partially responsible for fostering the very idea that they do.

If you are looking for proof that extraterrestrials exist, you may as well go straight to NASA. And that’s exactly what this documentary does. This one chronicles the history of astronauts sighting UFOs, but it also contains the titular and mind-bending “smoking gun” – that is, imagery taken from video cameras installed on space shuttle missions. The documentary takes the raw footage from those cameras and presents them to the viewer in a clear manner. Whereas lesser documentaries would scream “Look, that’s totally a UFO!” this one allows you to analyze the footage and decide for yourself. Did NASA capture extraterrestrial life on camera? Maybe, maybe not. You’ll just have to watch and find out.

There’s nothing particularly original about “The Day Before Disclosure.” It’s just a very well-told and impeccably-produced documentary that presents some tantalizing evidence for viewers to chew on. It contains a lot of traditional information, including stories of implants, alien abductions, and interviews with respected people like scholars and astronauts. Of course, much like “Shaun Ryder on UFOs,” your enjoyment of this documentary hinges entirely on whether you believe these peoples’ stories. There is little evidence to speak of, and skeptics will pounce on the outsized tales. But when the stories are this entertaining, and when a documentary is this well made, it’s worthy of note.

“Unacknowledged” primarily concerns Steven M. Greer, perhaps one of the most prominent ufologists in the world. Greer is the creator of both the Center for the Study of Extraterrestrial Intelligence and the Disclosure Project. In the service of the latter, this doc contains a bunch of original purported UFO footage and looks to expose high-level governmental operations meant to sustain UFO secrecy. It presents historical events in a new light and directly points a finger at many prominent and well-known government officials. Aas with many alien documentaries, it presents what it deems compelling evidence to suggest an official cover-up, and is recommended viewing for believers and skeptics alike.

This documentary concerns the archived files of MUFON. MUFON stands for The Mutual UFO Network, an organization consisting of thousands of members across dozens of countries who study alleged UFO sightings. So, if you want to hear of the greatest and most credible UFO sightings of all time, look no further than “Hangar 1: The UFO Files.” Sure, this all definitely might not transform skeptics into believers, as a lot of these stories are just as bizarre as you probably imagine. But they’re told with utter conviction, the recreations are entertaining, and it’s fascinating to get a glimpse into one of the biggest UFO-believing networks in the world.

There’s something profoundly unsettling watching an older alien documentary from the ‘70s; there’s just something creepy about old, grainy, color-washed footage. As for the nature of this doc’s content, it consists of the typical talking heads and barely discernible UFO footage, and it touches on a lot of popular American UFO stories like the Betty and Barney Hill incident. But perhaps the greatest thing about it is that two of its hosts are “The Twilight Zone” creator Rod Serling and none other than “Rocky’s” Burgess Meredith. The star power, stories and interviews all make this a documentary well worth watching.

This is a fantastic documentary that stands out from the pack in a number of intriguing ways. For one thing, it treats the possibility of alien civilizations in a scientific manner, not so much as gray, massive-headed beings that abduct, and probe you. It explores the famed Drake equation, a probabilistic argument that was concocted by astrophysicist Frank Drake in 1961. Following a complicated mathematical equation that the vast majority of laypeople don’t really understand, Drake concluded that there could be anywhere between a thousand and a hundred million extraterrestrial civilizations in our Milky Way alone. This documentary explores said equation and its conjectures, offering some quite intriguing theories regarding the existence of alien life.