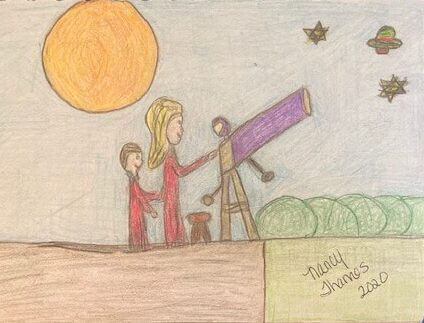 What is the theoretical limit to how dumb oppressive government regulations can become? We’re probably closing in on that number in the state of New York now that 2020 has begun. As of the beginning of the year, you now need a permit to stare up at the night sky in a number of state parks. I realize this sounds like a satirical piece that was rejected by the Onion, but it’s actually true. If you want to go to the park and look up into the sky, you’ll need a permit costing 35 dollars (60 if you’re coming in from out of state) or you will face the potential of a fine. For standing and looking up into the sky.

The Free Thought Project first reported on the story, explaining that “If citizens of the state wish to look up at the sky and view the stars at one of New York’s public parks, they will first have to obtain a ‘Stargazing permit.’” The site pointed out that pollution in the sky makes it more difficult for New Yorkers in “highly populated areas” to see the sky at night, so they travel to remote areas, many of which are located in state parks.

The state is charging residents $35 to become a fully-licensed stargazer allowed to view the stars between January and December of the year. If you are not lucky enough to be a New York resident and you are just visiting, you will have to fork over $60 for the privilege of admiring your favorite constellation in the night sky.

Lest you still think this is satire, you can view the details of the permit requirements at the state’s Parks Department website. The permits are only available for sale between January 1st and March 31st (plus the Tuesday after Labor Day through New Year’s Eve) so you’ll want to head out and get your permit pretty quickly.

As Paul Seaburn at MU pointed out, the number of questions such a policy raises is staggering. The most obvious one is… why? Why would you demand a permit for people to look upward? Paul speculates that it was done in an effort to cut down on nighttime traffic at some of the more popular parks. But this isn’t a permit to drive through the park. It’s a permit to stand and look upward, so it would affect people who walk there, take public transportation or anything else.

Aside from the bloody-minded stupidity of passing such a regulation in the first place, there are also plenty of questions about enforcement that leap to mind. What if the park rangers move in to apprehend you but you tell them that you’re not interested in the stars, but are instead hunting for UFOs? Would you still get a ticket? What if you’re on a date at the park and decide to have some impromptu “splendor in the grass?” (Younger readers can Google that.) Would the person on the bottom be subject to a fine if their eyes are facing upward?

Are you still required to have the permit if it’s cloudy out? After all, you wouldn’t be able to see the stars on an overcast night. (Or UFOs for that matter, unless they were flying really low to the ground.) Do the legally blind get a pass if they tip their heads upward?

I’m sincerely tempted to just head down to the park closest to me on a clear night this month and stand around looking at the sky. I can’t find what the penalties are for violating this regulation, but I’m pretty sure it would be worth it to be the first person to go to court and fight this. And I can’t even imagine how embarrassing it would be for the Park Ranger to have to walk up and give you a ticket for looking at the sky.

This is the most crazy thing to need a permit for. My son and I have spent years looking to the skies for UFO’s  and other worldly things. Yard sales ok I get it but this rather nuts what next? Permit to breath, lol. I have yet to find their reasoning for this, but then again what in the World would it be?

1 thought on “New York Now Requires A Permit To Look For UFOs Or Stargaze!”