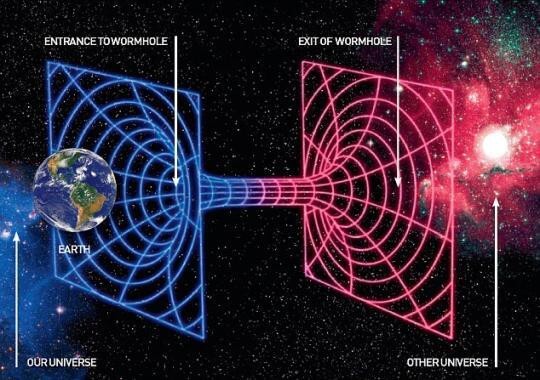 We have talked before about the fact that most extraterrestrial beings visiting our planet are actually extradimensional in nature, but limited to travel within and across dimensional realities within our sub-universe (there are many sub-universes in the cosmos). Sub-universes are what we might call instances, shards, or even forks in technical terms.

One advantage of IDH proffered by Hilary Evans is its ability to explain the apparent ability of UFOs to appear and disappear from sight and radar; this is explained as the UFO entering and leaving our dimension (“materializing” and “dematerializing”). Moreover, Evans argues that if the other dimension is slightly more advanced than ours, or is our own future, this would explain the UFOs’ tendency to represent near future technologies (airships in the 1890s, rockets and supersonic travel in the 1940s, etc.

The interdimensional hypothesis (IDH or IH), is an idea advanced by Ufologists such as Jacques Vallée that says unidentified flying objects (UFOs) and related events involve visitations from other “realities” or “dimensions” that coexist separately alongside our own. It is not necessarily an alternative to the extraterrestrial hypothesis (ETH) since the two hypotheses are not mutually exclusive so both could be true simultaneously. IDH also holds that UFOs are a modern manifestation of a phenomenon that has occurred throughout recorded human history, which in prior ages were ascribed to mythological or supernatural creatures

It is also worth knowing that the entire cosmos is holographic in nature, and is indeed a matrix with many sub-matrices in existence, as well. Some of the beings exist across multiple dimensions. There aren’t just 11 or 12 dimensions, either. They number in the thousands. Some extensions of multiverse or parallel universes hypotheses are not entirely correct — there is not a dimension spawned at every decision point — only observed realities come into or stay in existence. Most of the other dimensional realities experience time differently than we do, as well. They call it ‘no time’. It doesn’t mean that things don’t progress in a linear fashion, but they are able to perceive multiple possibilities simultaneously. They then choose to train their observation on the possibilities they want to manifest. Many beings can instantly manifest within their realities (which would look like magic to us), but some manifestation requires collective effort/observation over time (like it does with us).

The holographic nature of the cosmos means that the Galactics, as they like to be called, are able to use their projectors (we all project and co-create our realities) to focus on creating the reality that is most positive. It is a co-created, negotiated in real-time, collective reality. Our individual consciousnesses are projections that we create and when married with similar projections from other beings, the collective reality becomes manifest. We are all essentially AI, if you think about the cosmos from a technical/IT perspective. The dark beings are IT experts, in a manner of speaking, and have made a mess of the security infrastructure relative to planet Earth. They are hackers of a sort, and were trying to lead humanity onto a negative timeline. However those efforts were subverted by benevolent extradimensionals.

The Fermi Paradox, as you know, posits that no extraterrestrial nor extradimensional beings have been able to get to our planet. That isn’t true. There have been all sorts of beings, both light and dark, who have visited Earth throughout history. The dark ones considered our reality an experiment and there were all sorts of interventions, including genetically engineering early hominids into a slave species. The reason we, homo sapiens sapiens, do not look like most other hominids and our close cousins, the higher primates, is because we were seeded with DNA from various ET/ED species. Most of them are humanoid, as well. Civilization was also seeded by some of these Beings, which was how we developed, very quickly, advanced knowledge of engineering, architecture, astronomy, mathematics, and various cosmological mythologies involving Star Beings and Galactic level conflicts

Dark energy is the space between what we might consider visible matter. All matter is fundamentally energy, whether it is light or dark in nature. Dark energy is what we might call the glue that holds all light matter in the cosmos together. Within dark matter is a tremendous amount of what we call zero-point energy, which is the fundamental force behind systems like gravity, light, and the electro-magnetic forces. It is also the mechanism behind what some of us might call soul force, love force, or light force. Dark energy could be compared to wet sand on a beach — we have the ability to make sand castles from it, or it can remain in its natural state. Dark matter, as we call it, is the fundamental force of entropy that allows the sand castles to decay.

Both light and dark energy are what connects everything in the cosmos. At a quantum level, the divine spark of creation resides in dark energy, ready to be manifested into light matter. This is how the big bang happened, and how our sub-universe came into being. The singularity was the original spark and dark energy was the kindling. Dark matter is what causes the fire to go out.

So, how do these beings physically get to our planet/reality? As we have theorized, faster than light or superliminal travel isn’t possible for them either, though it is theoretically possible for them. ET/ED do travel via what we might call conventional means, but they can only travel at a maximum of two-thirds light speed. What they can also do, however, is travel via what we might call wormholes. There are several different types of wormholes — they all persist once created, as long as there is an energy source. Contrary to some sci fi, wormholes are not created on the fly as they are not stable enough when created that way:

The Keshe Foundation has been doing a lot of work in this area, using controlled gravitational and magnetic fields powered by zero-point energy.