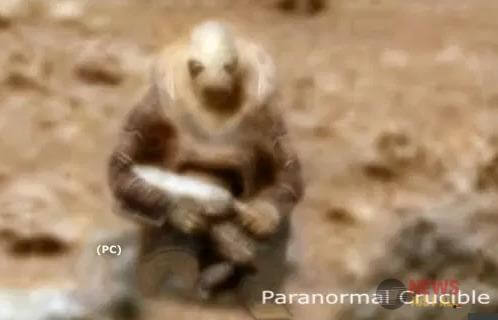 Paranormal Crucible
This video is a re-upload in higher quality and appears to show an ancient statue of perhaps a petrified little creature of some kind, possibly a martian soldier, frozen in time. I have processed and colorized the artifact to bring out the details, and its a remarkable discovery, whatever it is.

Virtual archeology is the future, through this more and more discoveries have been made recently, including the one that we will be focusing on today.

The Curiosity Rover that currently resides on Mars has captured a picture of what appears to be a Martial foot soldier stalking the rover’s every move.

Some skeptics such as Zak Farley believed this to be just a random rock formation but others are sure that this picture showcases an alien life form.

Some believe that this is actually a statue of a Martian soldier while others even went as far as to state that this picture could have been taken by surprise, so the Martian soldier didn’t have enough time to camouflage as a rock formation yet.

The photo was uploaded by NASA to its official website and the theory was originally conducted by a team of virtual archeologists known as the Paranormal Crucible who later on uploaded a video regarding this theory of theirs on their YouTube channel.