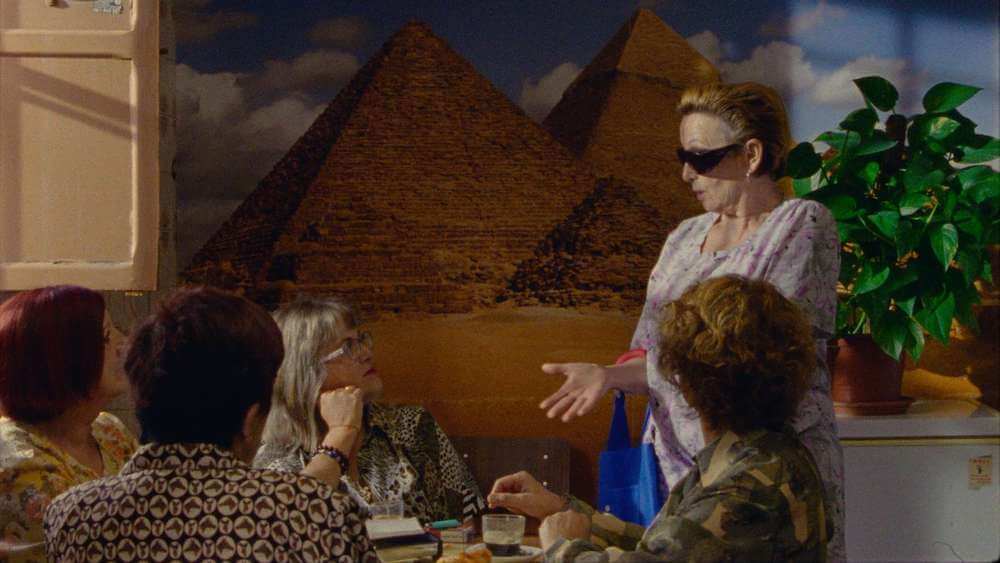 There’s a moment in “The Sacred Spirit,” Chema García Ibarra’s beguiling feature debut shot on 16mm, when viewers get uncomfortable wondering if the director realizes the playful tone he’s taking makes light of a deeply troubling situation. The concern is unwarranted — Ibarra fully understands what he’s doing — but the fact that the film keeps defying expectation while invariably hitting the right note is a testament to his flair for quirky storytelling combined with a terrific eye. Fascinated by the ways science fiction and the paranormal burrow inside people looking for meaning in an anarchic world, the filmmaker weaves an idiosyncratic story of a group of UFO believers oblivious to a darker element in their midst. A Locarno festival standout, the film should be snapped up by other festivals and showcases.

The tone is set right from the start when little Verónica (Llum Arqués) does an in-class presentation about how devil worshipers are involved in child organ trafficking. It’s at once ridiculous and disturbing: She’s barely school age and the subject is patently ludicrous, especially coming from the mouth of someone so young, but the seriousness of the delivery and the tight, fixed framing combine to generate a feeling of uneasy amusement that endures for the rest of the film. A trusting, sweet girl, Verónica has reasons to imagine there are dark forces about since her twin sister Vanessa has gone missing and their mother Charo (Joanna Valverde) is appealing to the public through the local news station in their home city of Elche (also the director’s native town, in Alicante province).

Charo’s brother José Manuel (Nacho Fernández) is a member of a local ufology group meeting regularly in the real estate offices of their leader Julio (José Ángel Asensio), where they share information on alien visits and abductions from past and present. José Manuel’s unquestioning belief in such off-the-wall theories extends to other loony New Age esoterica, signaled by the ancient Egyptian motifs decorating the café he runs. He was primed for such screwball notions by his leopard-print-loving mother Carmina (Rocío Ibáñez), a psychic whose sibylline pronouncements were taken as gospel by the neighborhood until Alzheimer’s reduced her capacity to make any sense.

Ibarra never treats these characters and their beliefs with disdain, even if we inevitably chuckle at their theories. While most of the people in “The Sacred Spirit” are demonstrably bonkers, there’s a sense that they’ve come to these ideas from a desire to be part of something greater than themselves. When things take a darker turn and it becomes clear that Julio’s been taking advantage of the ufology group’s gullibility for his own pedophilic purposes, the film’s tone starts to feel uncomfortable, as if its puckish gaze isn’t distinguishing between eccentricity and depravity. It’s a risky calculation but one that pays off because Ibarra uses our discomfort to make us question the innocence of daft theories and how easy it is to take advantage of people searching for signs. The final shot, of a giant inflating plastic Sphinx, its girth ultimately obscuring the important action behind, is a brilliant summation not just of what the story suggests — innocent madness can too easily distract from disturbing implications — but the director’s own talents.

As with his award-winning shorts, Ibarra cast from local non-professionals whose distinctive physical characteristics add a crucial note of verisimilitude. From Carmina’s tunneling glare, pregnant with a meaning we can deduce only individually, to obsessive New Age acolyte Andrea (Ainara Paredes) and her enthusiastic embrace of every new esoteric trend, the population of Elche is seen in a quest for guidance while continuing to value connections amongst themselves, whether in coffee klatches or group meetings. Only hard-working Charo seems removed from all that, simply wanting to get her daughter back.

With each immaculately framed shot there’s a sense that something unexpected is about to happen or enter the image, so even before the midway point the viewer develops an excited anticipatory reflex that’s never disappointed. While there’s a rigid essentiality about Ion de Sosa’s fixed camerawork, it doesn’t feel minimalistic largely because the people we see are anything but austere and the director clearly adores these characters. Shooting on 16mm helped give the visuals an appealing texture, capturing the southern Spanish sun with warmth rather than harshness. The musical selection is marvelously matched to the lovingly oddball tone, furthering the sense of surprise when Los Sobraos’ cover of Dolores O’Riordan’s “Zombie” suddenly accompanies a scene.