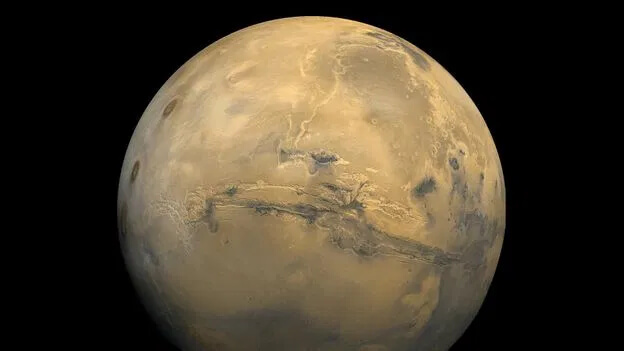 These are the words of Buzz Aldrin, the second man to walk on the Moon, in 2009. He was talking about a peculiar and solitary large rock, a monolith, that sits on the surface of the Martian moon Phobos.

Aldrin was right: many people are vexed by the Phobos monolith. It has inspired all manner of alien-based conspiracy theories and this fascinating discussion on Reddit. It even gave its name to an album released this year by Les Claypool and Sean Lennon Ono.

So what is it?

The monolith appears to be a large boulder, variously described as building-sized or 90m tall. It stands in a desolate, featureless region of Phobos, which probably makes the monolith seem even more impressive.

It is not alone. Mars boasts a monolith of its own.

However, the scientific community does not see such monoliths as evidence of advanced alien civilizations. The Martian monolith is almost certainly no more than a roughly straight-edged chunk of rock that tumbled down from a nearby cliff.

Perfectly natural erosional forces can also explain why Mars seems to be home to a levitating spoon and an Egyptian-style pyramid. Other spooky features, like the infamous face on Mars, do not seem quite so unusual when you take a closer look or view them from a different angle.

The Phobos monolith has not, as yet, received much scientific attention.

It is possibly simply a shard formed during an impact event. There is certainly evidence that Phobos has suffered the occasional asteroid impact.

Given that Phobos is so small, there is another potential source for impact debris on its surface. Such debris might actually be flung at Phobos from the surface of Mars, as the Red Planet is hit by asteroids from time to time.

Some computations suggest about 250 parts per million – or even more – of the unconsolidated rock debris on Phobos’s surface came from Mars.

Alternatively, the Phobos monolith might not have formed during an impact. It could be a rare chunk of the moon’s solid bedrock, poking up through a surface that is otherwise mostly strewn with loose debris.

This is an idea that was discussed several years ago by planetary scientists exploring the possibility of a mission to Phobos. If this hypothesis is true, it would mean the monolith could hold clues about the origins of Phobos itself.

And that would make the monolith a surprisingly big deal. According to some planetary science, Phobos is just about the most mysterious body in the known Solar System.

Phobos is one of two tiny moons orbiting Mars, the other being Deimos. It is not really clear how they got there.

Both are small and irregular in shape, which makes them look a little like asteroids that fell into Mars’s gravitational clutches long ago. But the moons orbit Mars in a way that is incompatible with this “snatched asteroid” idea.

An alternative is that they formed from the same material that Mars did when the planet coalesced billions of years ago. However, precise astronomical measurements reveal that Phobos has a much lower density than typical Martian rock.

That leaves a third idea: Mars suffered a devastating impact with a large protoplanet long ago, which generated the two moons.

A similar sort of collision is thought to be behind the creation of Earth’s Moon. But our Moon is large, and Phobos and Deimos are tiny. A massive impact should have given Mars a much larger satellite.

However, a couple of studies published in 2016 might have solved the mystery.

They both conclude that the third idea is correct. While one adds further evidence that the moons are not captured asteroids, the second sets out a detailed scenario that can explain how Mars ended up with two tiny moons.

The massive impact did, apparently, generate a large moon. It was this large moon that encouraged the formation of Phobos and Deimos, and several other satellites, from the leftover debris.

Eventually, the large moon and all but two of the small moons orbited so close to Mars that they disintegrated and returned to the Martian surface. Phobos and Deimos alone survive.

Proposed expeditions to analyze the composition of Phobos, and its monolith, could test this idea.

But the clock is ticking. In 2015, NASA suggested that Phobos is now slowly falling apart. Grooves on its surface might be early signs of the process.

Fortunately there is still plenty of time to visit Phobos before it dies. It will not disintegrate for another 30-50 million years.