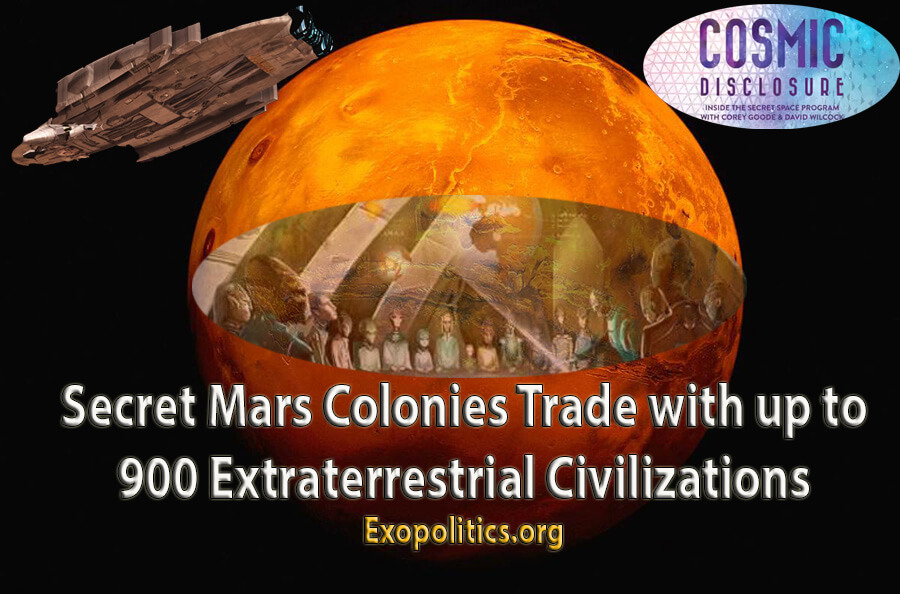 An inspection tour of a secret Mars colony that took place less than two months ago, on June 20, is the focus of episode seven of Gaia TV’s Cosmic Disclosure. Secret space program whistleblower, Corey Goode, had earlier released a detailed report of the incident on June 22. In the Cosmic Disclosure interview with David Wilcock, Goode summarizes key aspects of the tour, as well as giving more details about the alleged trading conducted by a secret space program, the Interplanetary Corporate Conglomerate, with up to 900 extraterrestrial civilizations.

Upon arrival at the base located in Mars’ southern hemisphere, Goode described seeing a parked dart-shaped space vehicle that belonged to the Interplanetary Corporate Conglomerate (ICC). Goode claims that these vehicles are among the most advanced spacecraft produced by the ICC Space Program. One of the dart-shaped vehicles had been captured by the NASA live stream of the International Space Station. It was docked with the Space Station and the incident has still not been satisfactorily explained by NASA. Goode says that such incidents are staged by a “Secret Space Program Alliance” to help prepare Earth’s population for the Secret Space Program Alliance disclosure that lie ahead. Goode also described the underground rail system that used vitrified rock for the walls of the tunnels that criss-crossed between the facilities all across Mars. He described the tunnels as looking like ripple-like glass. Wilcock explained how classified tunnel boring equipment has to pause periodically to create reinforced ring sections, which give the tunnels the rippled look. Underground bases researcher, Richard Sauder, has described how such advanced tunneling equipment works:

Nuclear subterrenes work by melting their way through the rock and soil, actually vitrifying it as they go, and leaving a neat, solidly glass-lined tunnel behind them. The heat is supplied by a compact nuclear reactor that circulates liquid lithium from the reactor core to the tunnel face, where it melts the rock. In the process of melting the rock the lithium loses some of its heat. It is then circulated back along the exterior of the tunneling machine to help cool the vitrified rock as the tunneling machine forces its way forward. The cooled lithium then circulates back to the reactor where the whole cycle starts over. In this way the nuclear subterrene slices through the rock like a nuclear powered, 2,000 degree Fahrenheit (1,100 Celsius) earthworm, boring its way deep underground.

Glass-like tubes have been photographed by NASA’s Mars Global Surveyor orbiter, which has led to speculation that they were tunnels of some kind, built by giant worms or some other method. Goode’s experiences at the Mars facility makes clear that these glass-like tubes are in fact part of a secret Mars-wide rail transportation network. One of the most astounding aspects of the inspection tour is the claim that the Interplanetary Corporate Conglomerate (ICC) trades with at least 900 different extraterrestrial civilizations. Goode and Lt Col Gonzales (a pseudonym used by another eyewitness yet to reveal himself) were shown an optical neurological device that was designed to interface with technologies that was very popular on spacecraft. Goode expressed his surprise at how far the ICC has gone in developing advanced technologies that were being requested by a number of extraterrestrial civilizations. Goode’s surprise is something that many in the general public are very likely to share upon learning the truth about the different secret space programs, and their interactions with up to 900 extraterrestrial civilizations.

What is especially helpful for those investigating Goode’s credibility is being able to compare his recollection of the Mars inspection tour in the Cosmic Disclosure interview, and the report he wrote on June 22. Comparing testimonies is a very familiar technique used by investigators wanting to confirm whether a person is lying or not. That’s why police investigators will get witnesses to repeat their recollections again and again. What is especially significant here is that writing and speaking utilize different hemispheres of the brain. While Goode’s written report uses more of his analytical left brain functions, the verbal report uses the more intuitive right brain functions. If he was lying or fabricating his story in any way, there would be inconsistencies. I found, however, no inconsistency between the earlier written report and Goode’s verbal recollection of the Mars inspection tour. Goode’s narration of the incident appears to be a sincere recollection of experiences that genuinely occurred, rather than trying to recall something that had been contrived.

Goode briefly touches upon a number of other issues in his Cosmic Disclosure interview regarding stasis-being giants who were mistakenly thought by global elites (Cabal/Illuminati) to be their returning gods. In addition, he gives more details about NSA documents that were taken by Edward Snowden that have finally been decrypted, and will soon be released in a massive document dump. This is an episode of Cosmic Disclosure that you really don’t want to miss!