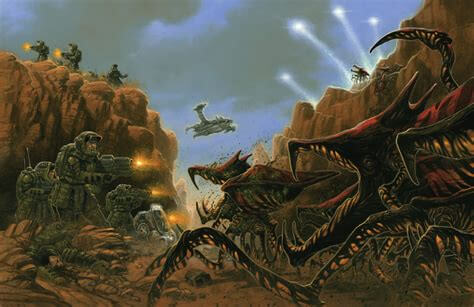 Oct 19, 2018
After years of research and training, General Spears had his opportunity to test out his Xenomorph Army. The MacArthur, with its cargo of alien soldiers, made its way to fight the first battle to retake the Earth.
Very Interesting , I hope you enjoy! The Alien (also known as a Xenomorph XX121 or Internecivus raptus) is a fictional endoparasitoid extraterrestrial species that is the antagonist of the Alien film series. The species made its debut in the film Alien (1979) and reappeared in the sequels Aliens (1986), Alien 3 (1992), and Alien Resurrection (1997). It also featured in the crossover films Alien vs. Predator (2004) and Aliens vs. Predator: Requiem (2007), with the skull of one of the creatures appearing briefly in Predator 2 (1990). Similar creatures of slightly different designs such as the “Deacon” make a brief appearance in the Ridley Scott film Prometheus (2012) along with the “Neomorph” and a variation of the Xenomorph which appear in the sequel Alien: Covenant (2017). In addition, the Alien appears in various literature and video game spin-offs from the franchises.
Please remember we all have different opinions, Think Before You Speak or Write Something that is cruel to Others. After all, We are only Humans. Wishing you clear skies and wide eyes. To share your experiences or just leave a comment there is a area below. Read or listen. We are the change the world has been waiting for! Have you witnessed an unidentified flying object? You are not alone. Whether you think UFOs are black projects, extraterrestrial craft, something else altogether, or just don’t know, again: you are not alone! Unconditional love. The road we all get to walk.