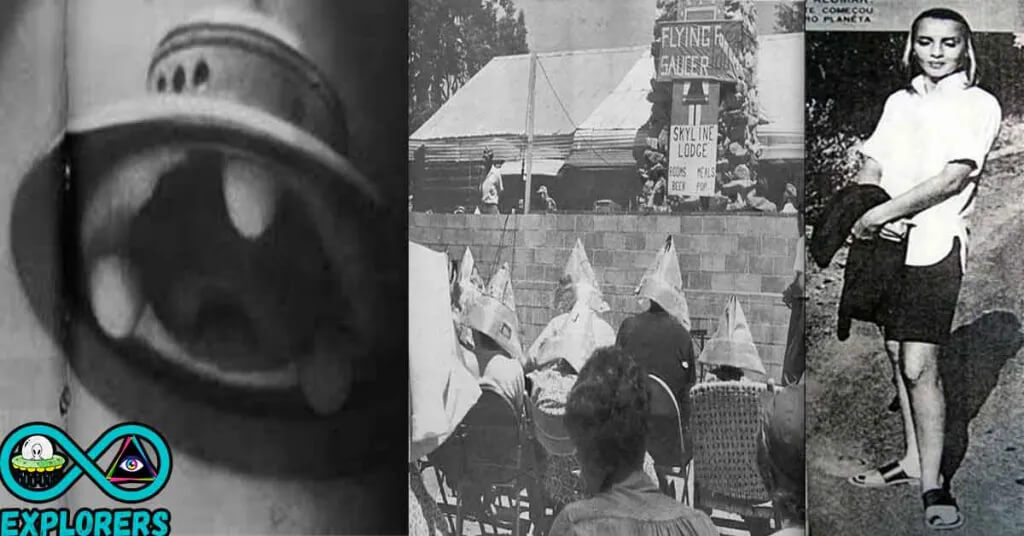 Seven years after the famous Roswell UFO crash incident, researchers claimed that a group of aliens from Venus arrived on Earth to learn about the knowledge of humans concerning aliens.

The most intriguing convention to discuss alien and other world activities took place between August 7th and 8th of 1954. The venue of the convention was the top of Mount Palomar, United States. The altitude of the venue was more than 1.8 Kilometers.

The convention was headed by the three most renowned and reliable contactees: George Adamski, Truman Bethurum, and Daniel Fry. The event was attended by thousands of people that included journalists, researchers, FBI agents, and commoners from all around the world.

People who have encountered several UFO encounters shared their experiences. George Adamski, the renowned UFO specialist asserted that the aliens from the planet Venus are similar to humans. They were so much alike that they infiltrated our societies and habited among us. A painting was presented by him which was an artistic representation of a Venusian.

Presence of an Unusual Woman Named Dolores Barrios at the Convention

On the first day of the convention, late at night, the attendees noticed an unusually beautiful woman in the company of two men. One of the two men was wearing spectacles. All three of them were light-skinned and the woman had blonde hair, but, oddly, she had deep black and intense eyes. The woman had an excessive cranial formation and a strange bone mark on the forehead.

The physical appearance of these attendees was quite similar to the description of the aliens from Venus that was explained by speaker Adamski earlier that day. Within minutes, a rumor began to spread among the attendees that these particular participants were “Venusians” in disguise.

One of the curious attendees asked the blonde woman that was she actually from the planet Venus, to which the woman calmly responded that “No, she is not”. The participant had a further conversation with the woman:

A journalist named João Martins was also present at the convention and found out that the woman, Dolores Barrios was a fashion designer from New York, and the two men in her company, were Donald Morand and Bill Jackmart, both musicians living in Manhattan Beach, California, as they claimed while signing the guestbook.

The Journalist from Brazil asked if he could capture a photograph of them, to which, they refused. All three of them seemed quite annoyed at being called Venusians. The woman Dolores Barrios, looked very much like the Venusian painted by the contactee, Adamski.

On the second day of the convention, Martins managed to capture a photograph of all three of them. After that, the trio ran towards the forest, and soon, a UFO took off. Unfortunately, the picture of the UFO could not be captured. Upon being investigated, it was found that no one has ever seen them earlier and was unable to recognize them raising suspicion.

It is believed by a few researchers that Dolores Barrios was a human and passed away in 2008. However, another group of UFO researchers still maintains the possibility that the name “Dolores Barrios” belonged to a deceased woman. A common practice used by the mob and cold war spies is to take a new identity at the time.

Presentation of George Adamski during the convention

George Adamski claimed that he had several encounters with aliens including the Nordic-like aliens, and he referred to them as “Space Brothers.” He stated that these “space brothers” descended on Earth using a flying saucer. They landed at the Colorado desert on November 20, 1952, and Adamski had the opportunity to fly in their craft.

The aliens warned Adamski about the future of humans on Earth and expressed their concern over the nuclear weapons and wars that could put human lives in peril.

Adamski presented the Venusians’ intentions and morphological structure, just like human beings, with various minor aspects. He emphasized the fact that their appearance is similar to ours and they could go undetected among us. He illustrated the physical appearance of Venusians in a painting.

The presentation raised questions among the audience as only a few hours later, the unusual trio made an appearance and startled them. This convention is considered to be historical due to the remarkable presence of Dolores Barrios and her friends Donald Morand and Bill Jackmart. Obviously, because they were similar to those described by the contactee just a few hours ago.

Publication in the magazine “O Cruzeiro”

Martins was editor of one of the largest magazines of that time, “O Cruzeiro”,
He narrated the incident in three editions during October of 1954. He was the sole journalist who made this incident known to the entire world.

On the other hand, Adamski did not like rumors. He thought it was a people trying to discredit him, disguising themselves as Venusians.

Claims of Adamski being Criticized

The rumors of nuclear war began to circulate during the 1950s. To add fuel to the fire, a movie named “The Day the Earth Stood Still” debut in the theaters in 1951. The plot of the movie revolves around a humanoid alien that visited Earth to deliver a message that the human race needs to live in peace or the planet will perish.

The plot of the movie was similar to the message delivered by the Venusian Orthon to Adamski. Hence, it was claimed by many that there could be a possibility of Adamski fantasizing the whole thing.

Moreover, during the 1950s to ’60s, Adamski released several photographs of UFOs, and a few of them turned out to be hoaxes. Once, George Adamski announced that he received the invitation to a secret audience with Pope John XXIII and earned a “Golden Medal of Honor” from His “Holiness.” In Rome, tourists could purchase precisely the same medal with a cheap plastic box.

Controversies associated with João Martins and the media

On May 7, 1952, Martins along with a photographer, Ed Keffel were at Quebra-Mar on Rio de Janeiro’s west zone were covering stories of couples enjoying the deserted beach. After a few interesting sessions with a number of couples, they claim to have seen a blue-gray flying object circular appeared before them.

The UFO hovered in the sky for a couple of minutes, and Ed Keffel managed to capture five photographs. The news was published along with the photographs in the “Diário da Noite,” a sensational tabloid.

The following morning, several military personnel including Colonel Jack Werley Hughes inspected the photographs and concluded the photographs to be authentic from the US embassy. Eight days later, the magazine “O Cruzeiro” from the same group releases an extra eight pages with photos from what today is known as the Barra da Tijuca UFO Incident.

Couple of years later, a few members of the magazine came forward and stated that these photographs must be a joke from inside the office. The director of the magazine, Leao Gondim de Oliveira asked for a deep analysis of the photographs at the Institute of Criminalistics of Guanabara.

It was concluded in the investigation that the shadows of elements on the scene were divergent. In the fourth photo, the environment’s shadow appears from right to left, and the flying saucer from left to right. The conclusion was never made public. Kodak, United States, also made an offer to the director of the magazine to analyze the photographs, however, he turned down the offer. Years later, the event in Palomar spread for three issues, in 19 pages total. João Martins and Ed Keffel covered the UFO subject in a large number of articles for “O Cruzeiro”.