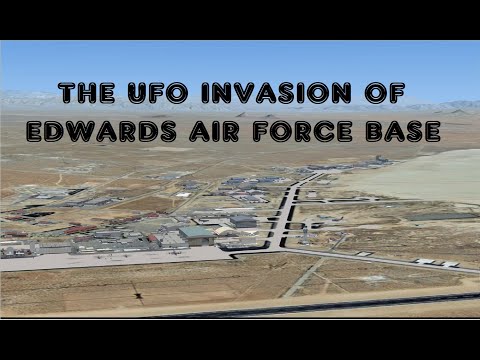 Preston Dennett
Many Air Force Bases across the United States and the world have been visited by UFOs. But there is one specific Air Force base that may be at the top of the list: Edwards Air Force base. The shocking and astounding events that have occurred at Edwards Air Force base go way beyond mere UFO sightings. In fact, virtually the entire range of the UFO phenomenon is represented. There are sightings, landings, face-to-face meetings with ETs, UFO crashes, abductions, reverse engineering of UFO technology and more! Events began as early as 1947 and are still continuing today. Way back in 1947, a two-days-long series of sightings put the base on high alert and changed the way the Air Force viewed and handled the UFO phenomenon. Following this, the base was visited regularly. For some reason, Edwards AFB has become a magnet for the UFO phenomenon. Few other locations on Earth have experienced the magnitude and frequency of UFO encounters. This video presents a gripping chronological history of UFO activity at this highly technological location. You will hear about dozens of close-up sightings, the day a UFO landed on the runway and was filmed by Air Force officers, the alleged meeting with President Eisenhower and extraterrestrials, a little known UFO crash, multiple cases involving reverse-engineering of ET technology and so much more, including cases that have never been revealed before. The military has done their best to cover-up these events. But the truth can no longer remain hidden. The public deserves to know the truth. The US government has known for more than 70 years that UFOs and aliens are real. Now it’s time that the world knows. If you would like to learn more about the activity that is occurring at Edwards, please check out my books, “Wondrous: 25 True UFO Encounters” and “UFOs over California: A True History of Extraterrestrials in the Golden State.”
Please remember we all have different opinions, Think Before You Speak or Write Something that is cruel to Others. After all, We are only Humans. Wishing you clear skies and wide eyes. To share your experiences or just leave a comment there is a area below. Read or listen.