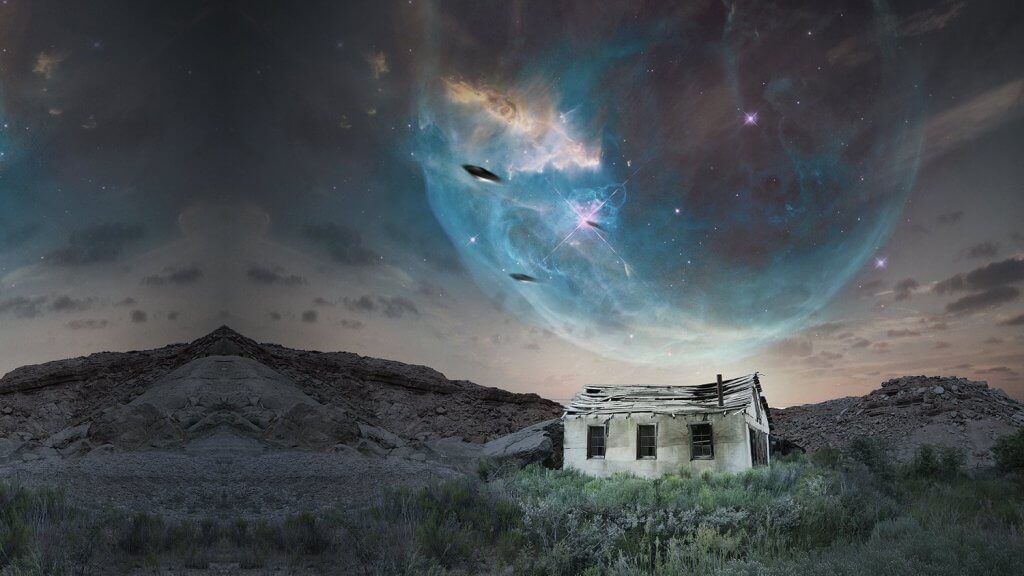 Skinwalker Ranch, also known as Sherman Ranch, is a property located on approximately 512 acres southeast of Ballard, Utah state that is reputed to be the site of paranormal and UFO-related activities. Its name is taken from the skin-walker of Navajo legend concerning vengeful Shaman.

Some have called it a supernatural place. Others have deemed it “cursed.” Terry Sherman got so spooked by the happenings on his new cattle ranch that 18 months after moving his family of four to the property now known by many as “Skinwalker Ranch” in northeastern Utah, he sold the 512-acre parcel away.

He and his wife Gwen shared their chilling experiences with a local reporter in June 1996: They’d seen mysterious crop circles, the Shermans said, and UFOs, and the systematic and repeated mutilation of their cattle—in an oddly surgical and bloodless manner. Within three months of the story’s publication, Las Vegas real estate magnate and UFO enthusiast Robert Bigelow bought the property for $200,000.

Under the name the National Institute for Discovery Science, Bigelow set up round-the-clock surveillance of the ranch, hoping to get to the bottom of the paranormal claims. But while that surveillance yielded a book, Hunt for the Skinwalker: Science Confronts the Unexplained at a Remote Ranch in Utah, in which several of the researchers claimed to have seen paranormal activities, they were unable to capture any meaningful physical evidence supporting the Shermans’ incredible stories.

The ranch was resold to Adamantium Real Estate, which has since applied to trademark the name “Skinwalker Ranch.”

Had the Shermans been lying about what they saw? Or under the spell of a collective delusion? Without evidence, the stories they told are difficult to believe, but they’re hardly unique. The Uinta Basin of eastern Utah has been such a hotbed of paranormal sightings over the years that some extraterrestrial enthusiasts have deemed it “UFO Alley.” “You can’t throw a rock in Southern Utah without hitting somebody who’s been abducted,” local filmmaker Trent Harris told the Deseret News.

Indeed, according to Hunt for the Skinwalker, odd objects have been spotted overhead since the first European explorers arrived: In 1776, Franciscan missionary Silvestre Vélez de Escalante wrote about strange fireballs appearing over his campfire in El Rey. And before the Europeans, of course, indigenous peoples occupied the Uinta Basin. Today, “Skinwalker Ranch” abuts the Uintah and Ouray Indian Reservation of the Ute Tribe.

Were the Shermans seeing things that nearby Native Americans had taken note of centuries before?

Not everything the Shermans saw on their ranch was sky-borne UFOs. They also claimed to see mysterious large animals: most notably, a wolf three times the size of a normal wolf that Terry shot at close range multiple times with a rifle—to seemingly no effect.

Then, on the night of March 12, 1997—after the ranch had been sold off—biochemist Colm Kelleher, working with Bigelow’s National Institute for Discovery Science, claimed to see a large humanoid creature spying on the research team from a tree.

As he detailed in Hunt for the Skinwalker, the creature was approximately 50 yards away, watching the team safely from a tree perch 20 feet off the ground.

“The large creature that lay motionless, almost casually, in the tree,” said Kelleher. “The only indication of the beast’s presence was the penetrating yellow light of the unblinking eyes as they stared fixedly back into the light.”

After Kelleher fired at the creature with a rifle, it disappeared. “It was then that I saw it—a single, obvious oval track about six inches in diameter embedded deeply in the patch of snow… It looked unusual: a single large print in the snow with two sharp claws protruding from the rear of the mark going a couple of inches deeper. It almost looked like a bird of prey, maybe a raptor print, but huge and, from the depth of the print, from a very heavy creature.”

The ‘Skinwalker’ in Skinwalker Ranch

Repeated sightings of humanlike creatures have led some to invoke the name “Skinwalker,” a shape-shifting character from Navajo tribal folklore. Among the Navajo, skinwalkers are like  evil werewolves, witches who can transform themselves into the creatures of their choosing.

But Sherman’s family ranch was 400 miles north of Navajo Nation. It was next to Ute territory. And when the Utes and the Navajo did cross paths, it was an acrimonious relationship, explains historian Sondra Jones, author of Being and Becoming Ute.

“It was not friendly,” Jones says. “The Navajo were more aggressive people; they took slaves, they had Ute slaves. And there was direct conflict when the Navajo attempted to move up into Ute territory,” at modern-day Pagosa Springs and Durango.

Other strange sightings have occurred directly next door, at Bottle Hollow—a 420-acre man-made reservoir on Ute land abutting the ranch, which was filled with fresh water in 1970 by federal government mandate. In 1998, a police officer saw a large light plunge into the reservoir and then reemerge, flying off into the night sky. One night in 2002, four young (non-Indian) men standing on the reservoir’s shoreline saw a blue-white ball enter the artificial lake.

According to the Hunt for the Skinwalker, the glowing ball dove into the water just a few feet from the shore, then emerged seconds later in a new form: a shimmering, maneuverable belt-shaped shaft of light. “After performing a brief writhing aerial dance, the belt of light zipped away at a high rate of speed, hugging the ground before disappearing below the top of Skinwalker Ridge.”

The appearance of the supernatural around Bottle Hollow makes sense with the context of Ute belief. According to Jones, amongst the Utes “springs and certain waterways were reservoirs of negative power… There were evil spirits or evil sprites that would rise up out of the water and drag you in.”