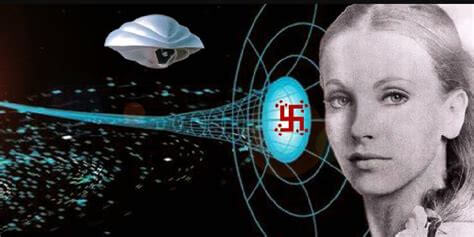 The Vril Society And Ahnenerbe

Before going into the conspiracy theories that the Nazi’s were looking to establish an advanced military base inside the Earth, it is important to understand the ideology and beliefs of Hitler and those close to him at the top of the Nazi party.

They were influenced heavily, behind the scenes, by a mysterious cult called The Vril Society, of which many top Nazi officers – including Hitler – were members. The Vril Society themselves were influenced by The Coming Race, a science fiction book by Bulwer Lytton, published in 1871. It tells the story of The Aryans – an advanced alien race who had the power to use the energy of the Universe itself. This piece of fiction laid the foundation for their society’s philosophy, and in turn, the Nazi party’s.

Members of the Vril Society claimed the story to be truth, and furthermore, that they were actually descendants of the Aryan race. Because of this, they too could harness and utilize the energy of the Universe. In order to fully realize their power however, they needed to hunt down and recover ancient relics, and re-learn and utilize long forgotten, ancient technology.

They had a particular interest in ancient Sanskrit texts, believing they told of the Aryan race and their conquering of what is now modern day India in ancient times. High ranking Nazi, Heinrich Himmler, was said to be very adept at reading and translating such ancient writings.

It appears that Himmler was arguably the strongest driving force of such beliefs within the Nazi party, even claiming that the Aryans were the original inhabitants of Atlantis. When Atlantis fell, he claimed that its survivors escaped to the north, settling in what is now mainland Europe, and that “true” Germans were descendants of the Atlanteans and in turn, the Aryan race. Himmler’s greatest desire seems to have been to replace Christianity with an Aryan religion.

One of the tools he would use to attempt to achieve this was a program called, Ahnenerbe – officially an institute to study German heritage and its links to the past. However, in reality it was used to send German forces around the globe in pursuit of ancient relics such as the Arc of the Covenant or The Holy Grail.

The documentary below looks at the Vril Society and the influence they had on the Nazi party in the run up to, and during the Second World War.