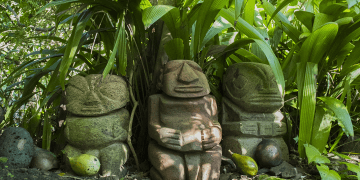 Aloha From Hawai’i With Bradda Roy

All across the world, there are stories about people of giant stature, and also of relatively small people. In the mainstream, these stories are almost always called myths, and the proof is elusive. Conspiracy theories abound, suggesting giant skeletons have been a carefully guarded secret. However, there are many reasons to believe there is more than a mere myth to these tales of giants and dwarfs.

In Hawaiian tradition, there are many stories of the Menehune, elusive small-statured people, a “pygmy tribe” who lived in the deep forests of the Hawaiian Islands. Today, local people point to the structures these people left behind as evidence that the Menehune were quite real, and the first settlers of the islands before the Polynesians arrived.

Below, watch Bradda Roy tell the legend of the Menehune Fishpond on the Kauai island, which locals say appeared after just one moonlit night 1,000 years ago. The pond, an engineering marvel, was constructed with a stone wall that is 900 feet long and five feet high. Legend says the Menehune created the wall, passing carefully squared lava rocks to each other over a distance of many miles to a quarry. (see video below)

“They call [the fish pond] the ‘invisible hands that built the fish pond.’ They say that they came back one day, and the fish pond was built,” says Roy. “Legend has it that the Menehune built this pond. Menehune are mythical people that lived in Hawaii long before the Hawaiians came here.”

“The legend that surrounds the fishpond is based on the mythical Menehune, Hawaii’s mischievous little people who performed legendary engineering feats. The Menehune lived in the forest and hid from humans. According to Hawaiian legends, the Menehune built this entire fishpond in one night. They managed this amazing task by lining up from the village of Makaweli for 25 miles, passing stones hand-to-hand to build the pond. Though Menehune legends abound, some say the word may have derived from the Tahitian word Manahune meaning commoner, or small in social standing, not in physical size.”

Another structure that the Menehune may have constructed in the ancient past is the Menehune or Kīkīaola Ditch at Waimea. The irrigation ditch was constructed of 120 carved basalt blocks running for 200 feet.

On the show, Finding Bigfoot, the team takes a detour and explores the legends of the Menehune. They visit the Kauai Museum, where the curator, Chucky Boy Chock tells them myths about different species of Menehune, including Menehunia musclaris, boloheadus, kokee, and commercialls. (see video below)

“The word Menehune comes from Tahitian for Manahune, which is Tahitian for ‘cast of commoners,’” says Chock. “The question that is always asked is, ‘Are they real stories?’ There is some evidence of that.’”

Chock points to the Menehune River also called the Alekoko River, as well as the Fishpond. The name of the river comes from another part of the legend according to other Hawaiian sources.

“The fishpond is said to have been built at the request of a chief named ʻAlekoko who requested one pond for himself and another for his sister Hāhālua. The Menehune agreed, but, as was their custom, they insisted that no one watch them while they do their work.
However, that night ʻAlekoko could not help himself, and he looked to see how the fishpond construction work was going. The Menehune immediately halted their efforts, and then they all washed their bloody hands in the river. This is how the fishpond acquired its name ʻAlekoko which means ‘Bloody Ripples.’”

Additional evidence that the Menehune were real people and not myth, comes from the fact that they were counted in a population census.
According to the University of Hawaii at Manoa Library:

“Sometime around A.D. 1500, Umi, king of the Big Island, supposedly conducted a census of his realm. Collecting all his people on a plain near Hualalai, he instructed each person to deposit a stone on a pile representing his district.
The first population census in historical times was undertaken in Wainiha Valley, Kauaʻi, near the beginning of the nineteenth century. A careful census of the valley counted more than 2,000 people, sixty-five of whom were described as Menehune. Menehune were the legendary race of small people who worked at night building fish ponds, roads, and temples.”

Other sources suggest the census from 1820 counted 65 people as Menehune.

Diverse stories of the Menehune remain popular throughout the Hawaiian Islands today. Some stories say they were like elves; others say they were ordinary average-stature indigenous people, while other stories claim they were stocky and highly-skilled people who were about two feet tall. Their numbers may have been in the many hundreds of thousands at one time across the islands. (see video below)

Below, get the fascinating story straight from Historian Aletha Ka’Ohi as she shares the background of the “Mythical Menehune” for the Kaua’i Historical Society. She believes the Menehune were given their name from the Tahitians as a way to label them as socially inferior and were the descendants of Hawaii’s first settlers.

Rather than having a dwarf stature, they were instead imagined that way by westerners who later arrived. According to witnesses that share their stories, the Menehune descendants still exist today, across the islands, and Menehune was a “common slave name.”

“In reality, the Menehune were distinct people of an ancient time,” says Ka’Ohi.

The historian and librarian believes they were real people and describes unique stone implements they once used called poi pounders. A similar stone implement was found at Ua Huka, in the Marquesas Islands, of French Polynesia. The two islands are around 3,650 kilometers (2268 miles) apart.

Aletha Ka’Ohi also notes differences in language pronunciation and spelling that suggest ties to French Polynesia and the Menehune. In fact, she traces her lineage to the Marquesas, and thus considers herself a descendant of the Menehune.

Other stories suggest the Menehune may have retreated to nearby Necker Island. According to Ancient Origins, these people may have constructed the ancient ceremonial standing stones found there.

“Many anthropologists believe that the island was a ceremonial and religious site. According to the myths and legends of the people of Kauai, which lies to the southeast, Necker Island was the last known refuge for the Menehune. According to the legend, the Menehune settled on Necker after being chased off Kaua’i by the stronger Polynesians and subsequently built the various stone structures there. Visits to the island are said to have started a few hundred years after the main Hawaiian Islands were inhabited, and ended a few hundred years before European contact.”

Relatively nearby the Marquesas Islands on the Island of Flores, Indonesia, archaeologists recently discovered an early human species, Homo floresiensis in 2003. The species has been nicknamed “the Hobbit” and could date back to 190,000 years old. A female skeleton came from a small person who stood 3 ft 6 in tall and weighed around 66 lbs.

Could these known small people be connected to the Menehune in some way?

According to the Smithsonian:

“H. floresiensis individuals stood approximately 3 feet 6 inches tall, had tiny brains, large teeth for their small size, shrugged-forward shoulders, no chins, receding foreheads, and relatively large feet due to their short legs. Despite their small body and brain size, H. floresiensis made and used stone tools, hunted small elephants and large rodents, coped with predators such as giant Komodo dragons, and may have used fire.”

It seems very likely that the Menehune were real people and their descendants live on today on Hawaii. The myths continue to entertain new generations. Ka’Ohi says children are told to keep their ears open for the sounds of the Menehune building walls. In reality, they may only need to listen to their Hawaiian neighbors.

“Children love stories about Menehune, and the best time for these stories are at night because the Menehune work only at night,” says Ka’Ohi.