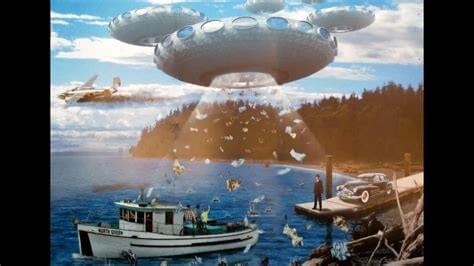 Very few people know about the Maury Island Incident that happened in the summer of 1947. A month before the Roswell incident, an incredible and violent UFO encounter occurred with a man named Harold Dahl who was on a conservation mission. During the encounter, his dog was allegedly killed when a UFO exploded near Dahl’s boat.

Interestingly, the story began at 2 o’clock in the afternoon on June 21, 1947, when Harold Dahl, his son Charles and their dog with two other members on the boat were patrolling near Maury Island on Puget Sound located at the northwestern coast of the U.S. state of Washington. It was a usual summer day, but soon the sky was filled with six donut-shaped UFOs (each measuring 100 feet across), hovering 800 meters above their boat.

Dahl noticed that one of the objects was flying strangely and was about to crash. Suddenly, a part of the spacecraft exploded in the air, and the debris hot as lava started showering above them. He ran to find some safer place on the boat, but his son’s arm got burns, and their dog could not survive the firestorm.

Dahl managed to take photographs of the alien spaceship and showed them to his boss Fred Crisman. He could not believe Dahl’s words so took an effort to investigate the scene by himself. Indeed, he did saw UFO with his own eyes.

We can say that this incident sparked the “UFO craze” around the world, but it also could be possible that the same incident gave birth to the conspiracy of the most mysterious organization known as “Men In Black.”

Well, in the morning of the following day, at around 6:30, a man in the black suit visited the Dahl house. According to author Gray Barker, the two ended up in a local restaurant where Dahl shared his story with this man. The man threatened Dahl and said that if he had spoken about it with anyone, bad things would have happened to him.

He also noted: “What I have said is proof to you that I know a great deal more about this experience of yours than you will want to believe.”

Three days after the Maury Island incident, the very first famous UFO incident involving Kenneth Arnold happened near Mt. Rainier. Even after the MIB’s threat, Dahl and Crisman contacted a Chicago magazine to sell their story. The magazine editor contacted Arnold to verify the claim.

Arnold asked two Army Air Corp Intelligence officers to help him investigate the case. Captain William L. Davidson and Lieutenant Frank M. Brown reached out to Dahl, collected the UFO samples, and left in a B-25 bomber the next day. Unfortunately, the plane was on fire after 30 minutes of flight, killing both officers.

The plane crashed near Kelso, Washington. Soon, the place was secured by another army intelligence officer. According to the Army’s Final Mission Report, a “top secret cargo” was recovered from the crash site. However, the 1949 report of the US government called the Maury Island UFO incident a hoax.

In 2014, producer and screenwriter Steve Edmiston released a short award-winning film: “The Maury Island Incident,” based on the declassified FBI documents.

“I’m the skeptic as far as what Harold Dahl saw. [But] I believe that even if Dahl’s story was a hoax, the hoax itself is awe-inspiring in its complexity and attention to detail. Most UFO sightings are isolated accounts. Dahl’s sighting of six flying donut-shaped discs involves damage to his boat from exploding fire and slag, running aground to hide under beach cliffs, the death of the family dog, injury to Dahl’s son, and history’s first Man in Black—and that’s all before the strange and absolutely true and tragic part of the tale kicks in.”

Just a question: if Dhal’s story was a hoax, why did the US army, CIA & FBI were constantly investigating such sightings?