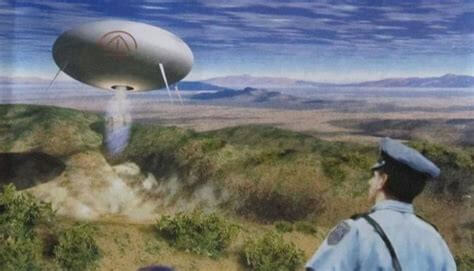 Like Roswell, this incident also occurred in New Mexico. In 1964, on the evening of April 24th, Socorro County Sergeant Lonnie Zamora witnessed what appeared to be a local dynamite mine shack exploding. Leaving off a high-speed pursuit of a reckless driver in order to investigate the apparent mine explosion, he discovered a priceless mine of UFO lore instead. His sighting became the most detailed extraterrestrial investigation to date, including immediate examination by the FBI, the U.S. Army and the U.S. Air Force. Adding to the enigma, The Air Force’s Project Blue Book inquiry came up empty handed, officially listing the explanation of the case as “unknown.” As officer Zamora approached the source of the explosion, it looked as if it may have been an overturned car. But no. As he got closer, he witnessed a white oval, or egg-shaped, round, whitish, and shiny aluminum-like object with four legs propping it.

He also described two smallish people dressed in white standing next to it, which seemed normal, until the object lifted off from the ground and slowly rose away with a loud roaring that lasted for about ten seconds. He said three rocket-like engines jutting from the belly of the craft produced a bright orange and blue funnel-shaped, smokeless flame. And then, Sergeant Zamora told investigators, “It disappeared as it went over the mountain. It had no flame, [smoke or noise] whatsoever, as it was traveling over the ground,” A burnt spot in the desert shrub and dirt was left behind. His story was corroborated by separate tourists’ accounts of an oval object and bluish flame with a loud roar. Within days AP and UPI reporters showed up to Socorro, New Mexico and the story made worldwide headlines. Eventually, Officer Zamora became so fed up with his celebrity status and media scrutiny by UFOlogists and the curious he cut ties with them. The good news is you can visit the site courtesy of Socorro County Chamber of Commerce. The memorial includes a rock walkway around one of the suspected landing sites.