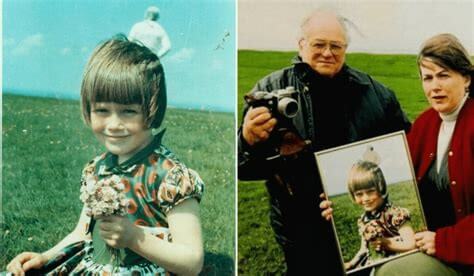 On May 24, 1964, British firefighter and amateur photographer Jim Templeton went on a weekend tour with his wife Annie and five-year-old daughter Elizabeth. They decided to take a ride through the moorlands of Solway Firth on the west coast. During the trip, Jim took several photos, and in one of the three pictures of his daughter, a figure that looked like an alien could be seen.

According to some hypotheses, the Solway Alien in invisible camouflage wanted to kidnap Elizabeth but was frightened by Templeton’s camera, mistaking it for an unknown weapon.

Solway Firth spaceman rushed away to his flying saucer, and at that moment, the fireman photographed him. Ufologists also explained the brief moment of visibility of the alien: “A white suit, a helmet & a dark visor.”

Skeptics immediately criticized the version with the landing of an invisible alien ship and offered a much more plausible version of events.

Templeton brought the photo to the Carlisle police but they did not find anything suspicious about it.

The local newspaper, Cumberland News picked up the story and within a few hours, it got spread everywhere. The photo was never proved to be a fake.

Over the four decades, that photo has been in the public domain. Templeton received thousands of letters from all over the world with different ideas and perspectives.

Other pictures of Templeton taken that day could have some explanation to this mystery. Templeton’s wife Annie was in a blue sundress that day.

If you imagine that the girl’s mother is standing behind her and is out of focus, then the photo gets a very simple explanation.

The alien helmet can also be explained. According to Templeton himself, Annie was wearing a beautiful Panama hat. Thus, if you remove the excessive contrast of the photo, you will see dark hair, pink back, and sundress sleeves that cover the shoulders of the Cumberland Alien.

Templeton believed that it was alien until the end of his life. He also claimed that shortly after the photo was published in the Daily Mail, he was visited by Men in Black.

They menacingly declared that they were working for the government. Secret agents took the firefighter to the place of photographing, measured something for a long time with strange devices, and then, without saying goodbye, left.

Later, Templeton also claimed that figures resembling the Cumberland Astronaut were also seen at launch of a Blue Streak missile in Woomera, South Australia. Because of this, it was even necessary to interrupt the launch of the satellite vehicle, and the figures disappeared without a trace.