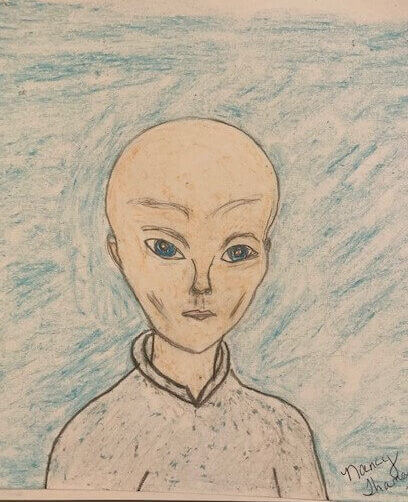 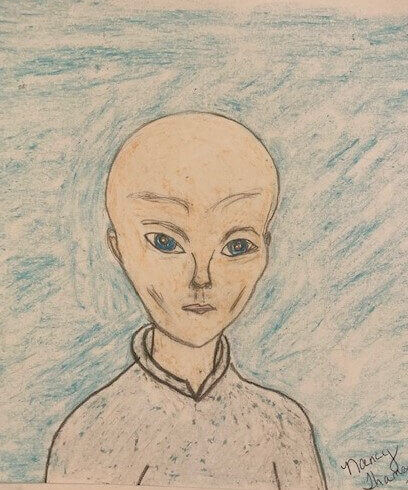 Last night I had this unusual Contact Experience, which I have had a lot lately. In this experience I am with a small Hybrid  Interdimensional Being which seemed to be a child in one vision. He was very small in stature compared to human children but was way more intelligent than any adult. He showed me images from my past being with as a Interdimensional Hybrid  infant and spending time with me and my oldest son. I introduced him to my Mom and Dad (images) and my oldest son Chris. This how he got to know Chris, and he is wanting  to encourage me and my son with new computer technology on how we can actually communicate to his home Planet or anywhere else in space. He ( I don’t recall a name) was here with me then took off to his Spacecraft (or I was there the whole time). So in a demonstration with him being on his spacecraft. He ask us to link to a program on my laptop screen he provided and start communication. We got some odd warning that we were interfering in a Government site and we were warned to leave, so we did. I rebooted my laptop and then looked for him to give us a message and he did. We were able to see him communicating with someone. When he is here on Earth around other humans and with me when he was younger he called me Mama. But when he is on a craft and with being older he calls me Nancy. After he finished with his communication (which we could watch but not hear any audio) he then responded to me and said I have some warnings for you Nancy. Humans can not trust everything we are told here and there could be many conflicts. There is a less know organization that is a Galactic Military Force that works in our (Humanity’s) best interest. He mentioned Bombings, Terrorism, and false flags. I was not clear on the name of this organization but I did see Diplomats and their Female Commander. She was white, and I could not tell her age.

I realize that it was not my Mom and Dad in the experience and I think maybe it really was my son, I have discussed this with him. This is not the first time I have been spoken to him about a computer technology unknown to us . He has had very similar dreams and experiences of the same or even other ones. He is the brains in my bunch! Like Minded as well.

My son has a wealth of experience in Technology. He has been working on computers since he was a teenager. After working in IT companies in various states, he moved back to His hometown to work at Regional Mid South Newspaper Business, A Business Journal, and various local newspapers) where he served as IT Director for 5 years. There, he was head of the technology infrastructure, programming, and development teams, and in charge of the deployment of ad technology for web and mobile across many high-traffic websites and mobile apps. He developed the premiere, real-time election reporting technology and dashboards for the state, county, and local races in his State, as well as a mobile app and website. He also assumed the role of IT Director of a Marketing Agency, a spin-off of the Newspaper, where he managed the technology infrastructure, programming, and development teams from 2013 to 2016.

For the past four years, he has been Chief Information Officer at A Mid South Regional Convenient Food Store Chain in 9 States, where he revamped their network and IT infrastructure and implemented various technologies across the stores and headquarters. He was in charge of cybersecurity and PCI compliance. He also developed software and tablet-based solutions, integrated with real-time sales data, to create a gamification system with a leaderboard for point of sale staff, which increased and incentivized sales and upselling. He led the software development team to implement dashboards, real-time reporting, various text messaging technologies, and numerous business automation tools across all departments and leadership.

At a another Regional Mid South Marketing Business, my son has already taken on the tasks of implementing custom-made software, technology, and mobile app development. He builds and implements strategic Corporate Information Technology (IT).

So I get up today and receive this information about “Why Does Channel 37 Not Exist?” Bang! I realize this is connected to my experience which I did an article on  this earlier. I think we are receiving messages and we are suppressing them and just pushing them aside to deal with day to day issues in our life’s. Link below to original site about Channel 37,  It is also on this site.

5 thoughts on “The Interdimensional Beings Are Trying To Help Us With New Technology! Messaged To Nancy Thames”