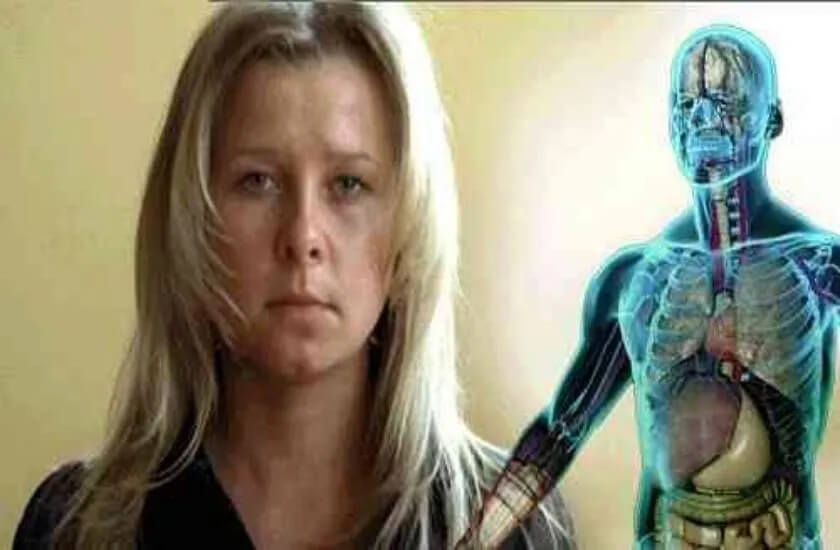 Natasha Demkina, a woman from Saransk, Russia, claims to have X-ray-like vision, that allows her to see inside human bodies and give diagnoses that are often more accurate than those made by professionals. Natalya Natasha Nikolayvevna Demkina, commonly known as Natasha Demkina, was born in 1987, and at the age of 10, Demkina has developed a strange superhuman ability, that was the X-Ray vision. Her power arose when she underwent the operation of the appendix.

Following surgery, there have been multiple reports of people reporting difficulties concentrating, having short attention spans, and having trouble remembering plans. These alterations can be significant enough to alter the personality of the individual who has been impacted, as well as impair their capacity to carry out their daily duties. Natasha Demkina’s case, on the other hand, was completely different, yet equally fascinating. She possessed the ability to see into a human body.

She asserted that once Natasha was sitting at home with her mother, and all of a sudden she could see the internal organs of her mother. After the incident, the words spread and people began to gather outside her house to examine her abilities.

When the doctors of her hometown came to know about her special powers, they asked her to perform a certain number of tasks that could prove whether her powers are genuine or not. To do so, she was taken to a local children’s hospital, and to everybody’s surprise, she could actually diagnose the issues that too accurately.

Demkina used pictures to present her special powers. Once she showed a picture of a stomach that had an ulcer, and upon testing it turned out that that the doctor really had an ulcer in his stomach. With the help of her extraordinary visions, Demkina corrected a false diagnosis. As per the doctor reports, a lady was suffering from cancer, however, she supposedly just had a minor cyst in her stomach.

“I have two sights. I can switch any minute without reason, should I want to see the state of health of a person. This switching makes no difficulty to me; I just need to think about it. I can see the full structure of the human body – how internal organs are positioned and how they function… afflicted organs produce a kind of radiation.”

Global Recognition Of The Case Of Natasha Demkina

With the passage of time, people from several countries began to know about Natasha. In 2004, she was brought to the UK, and there she diagnosed a person who met with an accident a year before.

She also examined a resident doctor Chris Steele of The Morning TV show. She accurately detected the operations that the doctor went through and also revealed certain issues such as Gall stones, Kidney stones, enlarged pancreas, and an enlarged liver that the doctor was suffering from. Upon examination, the doctor found out that he had a tumor in his intestines, but it was not life-threatening.

Later Discovery Chanel decided to test Natasha Demkina in New York on a documentary titled “The Girl with X-Ray Eyes”. The committee for Skeptical Inquiry (CSI) researchers Ray Human, Richard Wiseman, and Andrew Skolnick conducted the test. There were a total of seven patients, and she had to test five of them. Demkina diagnosed the four of them, and she had failed the test.

This experiment remains a controversy to this date, and it was criticized later. Then Demkina was tested by Professor Yoshio Machi, from Tokyo Denki University, who studies claims of unusual human abilities. She was successful in the test conducted by the professor after a few ground rules were set by him.

Demkina’s website claims that during the Tokyo experiment, she could see that one of the subjects had a prosthetic knee and that another had asymmetrically placed internal organs. Allegedly, she also detected pregnancy in a female subject and an undulating spinal curvature in another subject.

Natasha Demkina commenced her career by launching “Center of Special Diagnostics of the Natalya Demkina”. She became a free test subject and used to charge people for diagnosis till 2006. The objective of the center was to diagnose patients and treat illness in cooperation with “experts possessing unusual abilities, folk healers and professionals of traditional medicine.”

After her experience in London and New York, she set several conditions for the tests including the mandatory health certificate that indicated the ongoing health condition of the patient. She further added that the diagnosis would remain restricted to a single part of the body that could be the head, the torso, or the extremities.

Several people have been skeptical about her superpowers and have concluded that she tells the basic health status of the patient which is commonly known to every person. Also, many of her reports and explanations do not comply with the standard medical system.