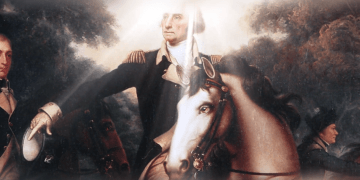 A recent poll suggests that more than half of American adults and over 60 percent of young Americans believe in intelligent extraterrestrial life. About the same number believe in God, which may not be surprising given they share in common the belief in “nonhuman and supernatural intelligent beings that often descend from the sky.”

A belief in extraterrestrials seems to be on the rise, but this is not exactly new in America. Documented UFOs reports began in the 1600s with the Massachusetts Bay Colony and Puritan Governor John Winthrop. Of course, UFO reports by Native Americans took place for thousands of years before that.

Founding Fathers, Thomas Jefferson, and Benjamin Franklin shared a belief in extraterrestrials and life on other planets.

Benjamin Franklin, in his Poor Richard’s Almanac, expounded on life on other worlds.

“Benjamin Franklin maintained that every star is a sun, and every sun nourishes a ‘chorus of worlds’ just like ours.”

Thomas Jefferson gave a now-famous lecture about a UFO sighting by William Dunbar of Baton Rouge, Louisiana, on April 5, 1800. The luminous UFO was the size of a house and rapidly flew over and crashed as spectators watched.

“It appeared to be about 200 yards above the surface of the earth, wholly luminous, but not emitting sparks; of a color resembling the sun near the horizon in a cold frosty evening, which may be called a crimson red. When passing right over the heads of the spectators, the light on the surface of the earth, was little short of the effect of sun-beams, though at the same time, looking another way, the stars were visible, which appears to be a confirmation of the opinion formed of its moderate elevation. In passing, a considerable degree of heat was felt but no electric sensation.

Immediately after it disappeared in the North East, a violent rushing noise was heard, as if the phenomenon was bearing down the forest before it, and in a few seconds a tremendous crash was heard similar to that of the largest piece of ordnance, causing a very sensible earthquake.”

Jefferson never found out more about what the UFO might have been.

“I have been informed, that search has been made in the place where the burning body fell, and that a considerable portion of the surface of the earth was found broken up, and every vegetable body burned or greatly scorched. I have not yet received answers to a number of queries I have sent on, which may perhaps bring to light more particulars.”

During one of the most significant conflicts in American history, the Civil War, reports of UFOs, and visions were not uncommon.

Immediately after the start of the Civil War, on April 19, 1861, the men of the 7th New York Militia saw a UFO following their steamboat as they traveled to Annapolis, Maryland. IT looked like a moving moon surrounded by three glowing circles. It was one of many sightings of strange aircraft during the Civil War.

There were also stories of otherworldly premonitions and apparitions. It seems they often featured visits by an apparition of the Founding Father and first president, George Washington.

On March 27, 1862, a Kansas newspaper published the account of General George B. McClellans’s “Dream.” The Union leader said an apparition of George Washington visited him. The vision of the first president warned McClellan that Confederate forces were closing in on the Capitol.

The warning was said to lead McClellan to change course to protect Washington. However, this story may have been fabricated by a Philadelphia journalist, Charles Wesley Alexander.

A famous story by the same sketchy author suggests that President Washington had his own vision of a shadowy floating angel at Valley Forge. However, this story may have only been another fictional account by Alexander.

The tale tells of “Washington’s Vision” through the lens of 99-year-old Anthony Sherman, who was supposedly present with George Washington’s army at Valley Forge during the winter of 1777. An angel shows Washington “the birth, progress, and destiny of the United States” through visions of overcoming great conflicts.

There are other stories about the ghost of Washington, thought by some to be possible cases of extraterrestrial intervention.

Two years into the Civil War at a pivotal moment in 1863, the 20th Maine Volunteer Infantry Regiment confronted Confederate troops in Gettysburg, Pennsylvania. A Confederate victory could have opened the way to Washington, D.C. and a path to win the Civil War.

Before the decisive and bloody Union victory at the Battle of Litte Round Top, Colonel Joshua Chamberlain led his troops to a fork in the road. Then witnesses saw a ghostly figure that looked like George Washington wearing a tri-cornered hat on horseback.

According to Chamberlains’ account in his book, Blood and Fire at Gettysburg:

“Suddenly, the clouds parted, and the moon shone down upon a horseman wearing a bright coat and a tricorn hat. Mounted on a magnificent pale horse, he cantered down one of the roads branching off before them. Turning slightly toward them, he waved them to follow.” If that’s not a sign, I don’t know what is. Hundreds of soldiers were said to have seen this man on horseback. They followed the man on horseback, who led them where they needed to be. Many of the officers assumed this was a Union general; the name General McClellan got bandied about. However, some of the men remarked on upon the strong resemblance the man bore to paintings of George Washington they had seen.”

Washington had been dead since 1799. Chamberlain took the vision of Washington’s lead and rode to victory after a dramatic downhill bayonet charge.

Later, Secretary of War, Edwin Stanton, appointed staff to interview the men who had experienced the vision of Washington. The testimony by the witnesses was unwavering.

According to Ghosts of New York:

“As rumors of a ghostly presence of the Founding Father of the country, Lincoln’s Secretary of War Edwin Stanton investigated. Colonel Joshua Chamberlain, the division commander, testified, “We know not what mystic power may be possessed by those who are now bivouacking with the dead. I only know the effect, but I dare not explain or deny the cause. Who shall say that Washington was not among the number of those who aided the country that he founded…”

The “Storm that Saved Washington”

Another story from 1814 has led some to claim that extraterrestrials or heavenly forces may have intervened to save the White House from burning to the ground.

The British burned the Supreme Court and the Library of Congress in a siege that lasted around 26 hours. The next stop was the White House. First Lady Dolly Madison escaped with a painted portrait of George Washington by Gilbert Stuart. The portrait is still on view today in the East Room of the White House.

Then an unusual thunderstorm of hurricane proportions suddenly struck, dousing the fires with rain. The British troops retreated to their ships, and some exterior White House walls barely survived the blaze. The “Storm that Saved Washington” gave Americans the courage to continue fighting back over 205 years ago.

According to Vintage News:

“The National Weather Service reports that more British soldiers were killed as a result of the storm than had been killed in the battle the day before.
Two British cannons were even lifted up and moved by the force of the accompanying tornado which ripped through the middle of the city.
What makes this event even more serendipitous for the Americans is that, as Smithsonian reports, there have only been seven other tornadoes recorded in Washington, D.C. in the 204 years since.”

Today, a door beneath the White House contains visibly burned wood, as you can see in this video from WUSA9 news:

Other influential men of early America had an open mind about the possibility of extraterrestrial life, including Philadelphia inventor and astronomer, David Rittenhouse, John Adams, and Thomas Paine. Some would argue that their refreshing open-mindedness and willingness to abandon old creeds and dogma are what made the “America experiment” as we know it possible today.

We don’t know if extraterrestrials or angels also played a part in preserving and protecting America. If so, may they long continue to do so.

More from the History Channel: