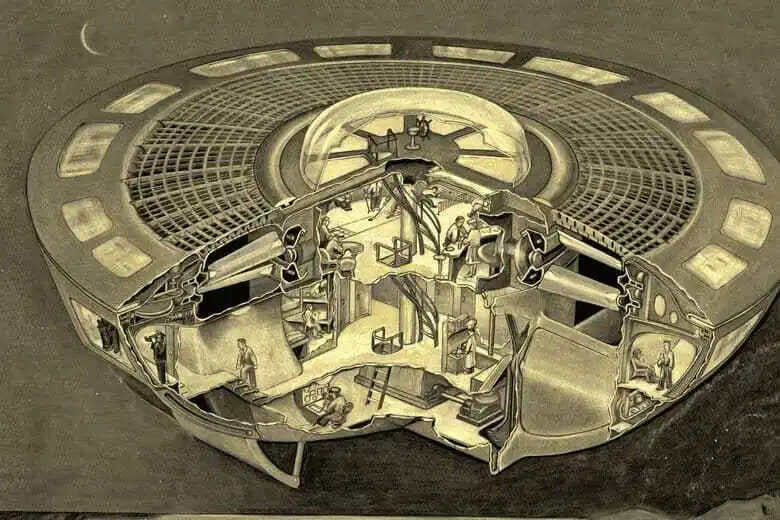 Multi-talented Dutch-American inventor Alexander Weygers was probably the first person who surprised the world with his mind-blowing skills that included spectacular machine designs. Most of his ideas about machines remained on the paper, and one of them was a “flying saucer.” It seemed that everyone had forgotten about him until an art dealer named Randy Hunter told the world about his story. He began collecting any evidence of Weygers’ life to open his museum in Silicon Valley.

In the hard time of the 2008 financial crisis, no one was buying stuff from artists and gallery owners. Then owner of the sculpture workshop Larry Fischer, who had been collecting Alexander Weygers collection for many years, decided to sell it at auction. Before that, he had called his friend Randy Hunter to choose something from his collection.

Hunter liked one sculpture of Alexander Weygers and decided to buy it, but when he discovered that the collection had thirty more artworks by Weygers, he bought them all.

Weygers could have become famous for his design of a flying saucer known as “the Discopter,” but during his lifetime almost no one knew about him. First, Hunter began buying Weygers’ works to earn money. But the more Hunter learned about Weygers, the more he became interested in him.

Hunter found out that Alexander Weygers was born on the Indonesian island of Java in 1901. He came from a Dutch family who owned sugar plantations in Indonesia when it was the Dutch colony. The Weygers family did well, but the boy still helped the adults at the local blacksmith’s. He studied mechanical engineering, naval architecture, marine engineering and trained as a ship architect.

In 1926, Weygers moved to the United States. Then he began to work on the drawings of the Discopter but did not patent the invention. Two years later, his wife Jacoba Hutter and child died during childbirth, which caused the engineer to fall into a deep depression and stop working on the invention.

Weygers abandoned the Discopter project and started spending time on sculpturing. His works even ended up in several museums. He also worked for intelligence in the US army during World War II where he translated messages from Malay, Dutch, Italian, and German. After demobilization, Weygers returned to work on the Discopter. As the war was still going on, he thought that his designs of the flying saucer could help the USA and his relatives who remained in the Dutch East Indies. According to him, the Discopter could fly unnoticed between enemy positions and would have a tangible advantage over the aircraft of that time.

While working for the Northrop Corporation, an aircraft manufacturer, Weygers felt that they wanted to steal his invention. Then he decided to move to the Carmel Valley in California where he built his house and workshop from the junkyard.

In 1945, Weygers once again returned to the Discopter. He received a patent, which he wanted to give to the military in order to start producing an aircraft for military purposes. But no one was interested in his invention.

He wrote on his patent:

“My invention relates to a wingless, heavier-than-air flying craft, whose outstanding example, until the time of the instant invention, has been the helicopter.

To a helicopter, a craft constructed on the principles of my invention bears a superficial resemblance in that both types are sustained by at least one horizontal rotor. From this point on, however, all similarities between the two types of flying craft end. A craft embodying my invention is distinguished from a helicopter in that the rotor or rotors in my craft are enclosed within a substantially vertical tunnel, the rotor regarded as a whole is the main shaft less and the external form of the craft is not very different from the familiar discus of the athlete, in common with which the craft enjoys certain aerodynamic advantages characteristic of the passage of the discus thru the air. Not only the rotors and power plant compartments but all of the usual moving and fixed protruding parts, present in both airplanes and helicopters, such as stabilizing and directing means and otherwise, are entirely enclosed within the strikingly simple and cleanly streamlined contour line of the craft when regarded from exteriorly thereof in any elevation view, thereby concealing from the casual view such parts.”

In the late 1940s, the world media was filled with the news of flying saucers and alien encounters. Historians believe that Weygers’ ideas and Romanian inventor, Henri Coanda, who built a flying saucer in the 1930s, could be the reason behind the surge of UFO sightings. When NASA and other American companies tried to build a disk-shaped vertical takeoff aircraft in the 1950s, Weygers realized that his project had been stolen. He patented his invention already in 1944 that could serve as a prototype for the aircraft that the US military was working on. He even requested the US Navy and Newspapers to mention him as the inventor of the disc-shaped aircraft.

Weygers realized that without a power source, the Discopter would not take off. But he believed that if they were interested in its development at one time and would allocate budget, Discopter flying saucer would become a reality.

In the mid-70s, Weygers published some books and attracted people from all over the world. He seemed to be an inventor from another era. In his classes, he talked about how to find materials, make tools and sculptures from them. In 1984, he was diagnosed with macular degeneration (vision loss), so he could no longer focus on his work. Five years later he died.