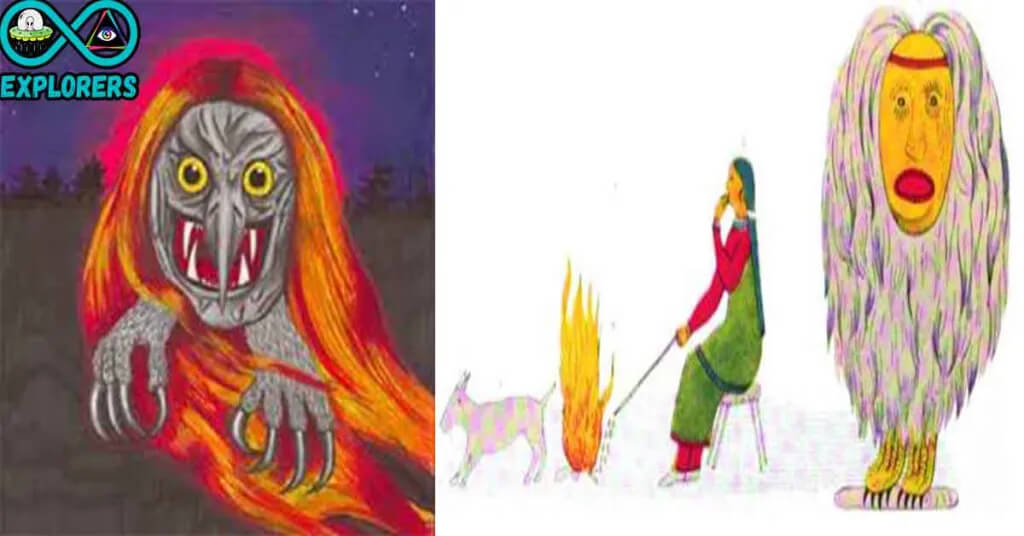 The Flying Head is one of the most terrible creatures in the myths and legends of the Iroquois, as well as the Wyandot Indians living in the northeastern United States.

Most often, this entity was simply called the Flying Head or Big Head, because that is exactly what it looked like – a head that looked like a human, flying through the air.

It was believed that this is something like a cursed spirit that is insatiable and constantly thirsts for human flesh due to the curse imposed on it.

The details of the description of the Canoncistonti (Flying Head) differ depending on where the Indians lived, most often described as having long black hair, “terrible” eyes, and a very wide mouth with many razor-sharp teeth.

In some stories, a pair of wings were added to the appearance of the Head, like a bat, large and stuffed with something (probably meat) cheeks and some limbs from below with very sharp and long claws.

According to the most popular legend about the Flying Head, was that many hundreds of years ago the Canoncistonti scared and drove (or completely exterminated) a small tribe of Indians from the area near the Hudson River, which later, after the arrival of white settlers here, became part of the state of New York.

In the early 19th century, a Mohawk from Lake Pleasant, New York, who called himself Captain Gill, claimed to know the details of this legend and that this story allegedly took place near Lake Sakandaga. One of the Iroquois tribes in those days had their own village on the hill, which is now located outside Hamilton County.

He said that once there was a very harsh winter here, which destroyed the plants and drove the moose and deer to other areas. Local hunters could not reach them and the fishing was also unsuccessful. Then one day the famine became so severe that entire families began to die.

Young members of the Indian community began to talk about migration from an area surrounded by hostile tribes since it was impossible to simply move their hunting grounds for the season. They suggested going to a large lake in the west, believing that once they were behind the lake, they would be in more favorable conditions for hunting and fishing.

The tribe’s elders, however, were opposed to leaving their homeland and said the journey sounded like complete madness. They also said that hunger is not just an accident, but a disaster that God the Lord of Life imposed on their people for their sins and that if you just endure it, the punishment will soon end, but if you run away to another place, then the punishment will follow. behind them on their heels.

But the young men did not listen to the old people, moreover, the speech of the elders enraged them, they attacked and killed them, in order to then go beyond the lake. But then another problem arose, what to do with the remains of the elders. According to legend, they wanted to somehow sanctify this deed by donating bodies to the Lord of Life. They decided to decapitate the bodies, burn them and immerse the heads of the old people on the bottom of the lake.

And during this case, one of the young leaders who planned the crime got entangled in the ropes tying their heads together and then drowned. And then bubbles and slime appeared on the lake, foreshadowing the emergence of a terrible monster from the water: a giant head with wings, which began to chase and kill members of the tribe, devouring their bodies. Nobody was able to escape.

Legend has it that after finishing off this tribe, the Big Head began to terrorize neighboring tribes, apparently for no particular reason, but simply because of its evil nature.

Many Iroquois were worried about this monster until the next thing happened. One day, the Big Head flew to the door of a hut in which a lonely woman lived. She sat in front of the fire and roasted acorns, which, as soon as they were ready, she removed from the fire and ate.

Seeing this, the Head decided that it was facing a very powerful witch. able to eat burning coals. And she scared the flying head so much that it flew away and never returned to this tribe.

The stories of the Flying Head seemed so reliable to the Indians that, in addition to the Iroquois, many other neighboring Indian tribes stayed away from this place for many years and the hill on which the village was located was also considered cursed from then on.

In later years, in this prominent place, someone decided to build hotels for tourists and built as many as three. And all of them soon, one by one, mysteriously burned to the ground. The causes of the fire remained unknown.

What do you think about the flying head (Canoncistonti)? Leave us your comments below.