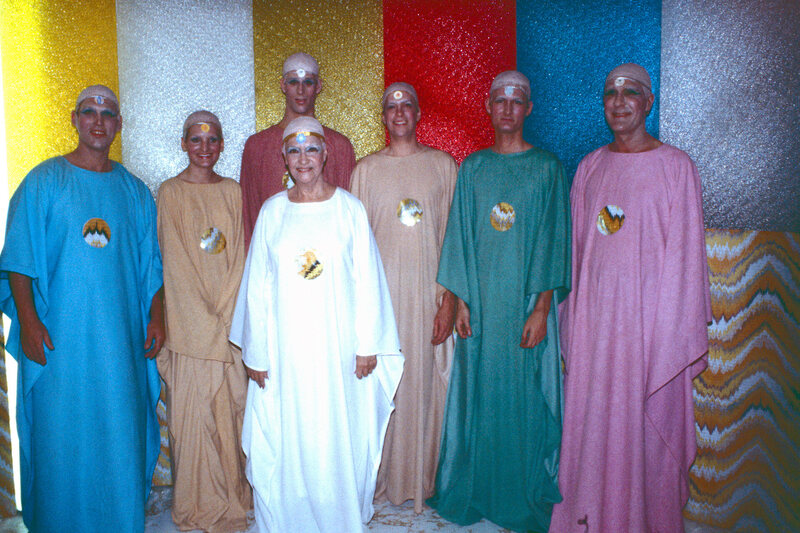 Ruth Norman, a.k.a. Archangel Uriel, and some Unariuns dressed up for a psychodrama.

In the early ‘80s, American channel surfers began to encounter some pretty out-there public-access programming from a California collective known as Unarius. Led by a woman named Ruth Norman, a warm and maternal figure who appeared on-screen dressed in a variety of fluffy, sparkly, over-the-top costumes, the videos were known by their creators as psychodramas. The narratives often included aliens, UFOs, and historical settings, and the performers appeared to be making up their lines as they went along.

The participants in these psychodramas, which continued to air on public access channels into the ‘90s, were not professional actors, but members of a UFO cult re-enacting their memories of past lives on film. They were part of Unarius, a self-described “spiritual school” that offers self-improvement “based on the interdimensional understanding of energy.”

The Pioneering Mountain Climber and Skier Who Filmed Her Own Exploits

Her work is now available as part of a project to digitize home movies made by women.
Read more

Ruth Norman died in 1993, but her nurturing spirit certainly lives on, most recently in the form of We Are Not Alone, a short documentary that features Unariuns talking about their departed leader and includes footage of those compelling but confusing psychodramas.

We spoke to the film’s director, Jodi Wille, about Unarius, its entrancing leader, and the wide-ranging nature of cults.

How did you first encounter Unarius?

I first came across them in the ’90s, when their videos aired on public access stations in Los Angeles. Some people I knew, mostly obscure film and record collectors and discriminating stoners, raved about their videos and would record them off the public access channels in L.A. and other cities and trade tapes with each other. The VHS bootlegs were highly coveted in certain circles. Back then, those collectors and underground writers basically thought of Unarius as a bizarre and preposterous but essentially benign cult, valued largely for their kitsch appeal. I even thought of them that way at first.

What made you think, “I need to make a documentary about this”?

A few years ago, I was co-curating an exhibition called “The Visionary Experience” for the American Visionary Art Museum in Baltimore. I wanted to include Unarius films and artwork in the exhibition, and so I visited the Unariuns at their center in El Cajon a number of times. I was invited to examine their archive of self-produced films and videos, self-published books, audio recordings, student paintings, photographs, and costumes—a massive collection that completely left me slack-jawed, mind completely melted. I discovered inspired and aesthetically potent work, the output of a dynamic, outlandish, psychically guided creative collective who created transcendent artwork for the purposes of spiritual healing.

I spent time hanging out with the Unariuns, staying overnight and sharing meals and wine with them, and was struck by their self-awareness, sense of humor, kindness, generosity, and basic sense of decency. In many ways they appear to be typical suburban San Diegans, yet they can fit some of the most radical, far out conceptions of the universe into their brains. They’ve found a way to live functionally in our dysfunctional society by cultivating rich and meaningful inner worlds and a community to support each other. I found myself wanting to hang out with them more and more and hear more of their personal stories. I discovered the colorful history of the group and their leaders is far wilder, weirder, and more beautiful than I could have ever imagined. I became obsessed. I still am.

Performers on set during the filming of a psychodrama.

How is Unarius similar to and different than other cults, particularly ones involving aliens?

Well, cult is such a charged word, colored by the corporate media’s anti-cult backlash of the ’70s and ’90s, which brainwashed so many people into believing wildly inaccurate and negative ideas about alternative spiritual groups, which religious scholars insist are largely benign and have proven to be an important part of cultural and spiritual renewal in times of decline throughout human history. I like to describe Unarius the way they describe themselves, as an educational foundation; a non-profit organization collectively run by volunteers.

Unarius has quite a bit in common with a long tradition of metaphysical groups that go all the way back to Pythagoras, but more recently include the Theosophists, the I Am Movement, and Elizabeth Clare Prophet’s Church Universal and Triumphant to name a few, who have clairvoyant founders, believe in principles of reincarnation, and who interact with spirit guides.

But they are unique in a number of ways. Their cosmology is collectively created—and continuously growing. All members contribute to the narrative as their own past life memories unfold (they recognize that they have a shared history with each other throughout lifetimes as a soul group).

What also distinguishes Unarius from the others is their emphasis on spiritual healing through past life therapy and reenactments on film. Their prodigious creative output related to this peaked in the mid-’70s to the mid-’80s when several very talented and impassioned young artists were in the group, resulting in three feature films, 80 television shows, as well as scores of student paintings, hundreds of handmade costumes, thousands of photographs, and over 200 self-published books. To me, Unarius in those golden days was the ultimate DIY spiritual creative collective.

Ruth Norman in two of her typically flamboyant outfits.

Ruth Norman fascinates me! People get so emotional talking about her. What’s your take on her and her appeal to Unarius followers?

Well, she was such a lover. She was a cosmic visionary cloaked in a rainbow cape and platforms. She was exuberant, self-made, wildly creative, fearless, and radically benevolent; a super powered, bawdy fairy godmother who helped dozens of awkward, inhibited, drug-addicted, and otherwise screwed-up individuals transform their lives and build community through self-examination and creative expression. She’s a true American original.

A UFO moment during the filming of a Unarius psychodrama.

Unarius pioneered a self distribution system through public access stations across the country, ingeniously networking with mail-order students in various cities to get their programs in regular rotation on public access stations in 20 states during the ’80s and ’90s. But even before that, Ruth Norman became a minor media star in the ’70s and ’80s when she made a series of predictions regarding the imminent landing of [advanced extraterrestrial beings known as] the Space Brothers. The Brothers never showed up, but she was able to spread the Unariun messages of love and the positive future of the universe to millions through interviews on several national shows including Tom Snyder’s Tomorrow Show and Real People. She was a marketing genius.

There are so many showstoppers in her closet….but if I had to choose only one, it would have to be her cosmic generator outfit [above]. She couldn’t walk it it—she actually had to step into it and then sit on a chair to wear it, it was so large and elaborate, bedecked with 33 of the planets from the interplanetary confederation protruding from her skirt and elaborate, electrified flames shooting from her hands, shoulders, and beehive hairdo.