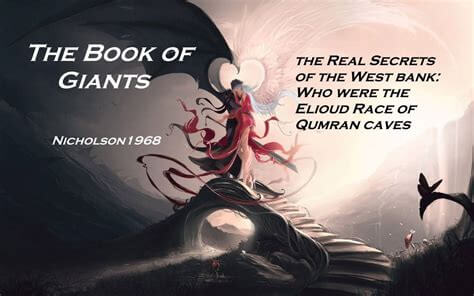 The Giants were the Nephilim, the offspring of the “sons of God” the Fallen Angels (Watchers).

The Elouid were the children of the Nephilim.

The Giants or Nephilim had the spirits of their fathers, but mortal bodies like their mothers. These Nephilim offspring of Fallen Angels had human bodies, and it makes sense that they could also reproduce with human women. In fact, they were a closer physical match (what we would call today a DNA match) with humans than with their fathers the Fallen Angels.

Nothing in the Bible or history indicates that Nephilim were sterile, and could not reproduce. Why would we think that they were sterile? Rather they are referred to as, “men” and so they apparently were human enough to reproduce. Without an articulated exception, it must be assumed that, “men” are able to reproduce. The Bible calls Giants the “men of renown” in Genesis. Therefore, as we have explained, if they were men then they could reproduce.

There were giants in the earth in those days; and also after that, when the sons of God came in unto the daughters of men, and they bare children to them, the same became mighty men which were of old, men of renown.” Genesis 6:4

Nephilim Giants mated with humans, and their children are called the Elouid, or sometimes they are known by the name Eljo.

For owing to these three things came the flood upon the earth, namely, owing to the fornication wherein the Watchers against the law of their ordinances went a whoring after the daughters of men, and took themselves wives of all which they chose: and they made the beginning of uncleanness. And they begat sons the Nâphîdîm, and they were all unlike, and they devoured one another: and the Giants slew the Nâphîl, and the Nâphîl slew the Eljô, and the Eljô mankind, and one man another.” – Jubilees 7:21-22

What most authors have not taken into account is that Nephilim and their children the Elouid could reproduce. This explains some of the strangeness of ancient mythology. Moreover, perhaps where humanoids such as the Neanderthal’s came from, and why they are not of the same DNA branch as modern humans. However, Neanderthals were not the only hominin species that humans mated with, according to a new study East Asian populations share genes with a mysterious archaic hominin species that lived in Siberia, the Denisovans that are a close cousin to the Neanderthal.

Neanderthals, lived in Europe, the Middle East and parts of western Asia from about 500,000 years ago to as recently as 30,000 years ago, say scientists. The amount of genetic variation throughout all modern human populations is surprisingly small and implies a recent origin for the common ancestor of us all. Accordingly, this agrees with Noah’s flood where in Genesis the Nephilim and their children are destroyed. Although, there were other incursions of fallen angels they never again corrupted humanity to the degree they had previously to the flood.

Nephilim and Elouid had six fingers and six toes.

And yet again there was war at Gath, where was a man of great stature, whose fingers and toes were four and twenty, six on each hand, and six on each foot: and he also was the son of the giant. But when he defied Israel, Jonathan the son of Shimea David’s brother slew him. These were born unto the giant in Gath; and they fell by the hand of David, and by the hand of his servants. (1Ch 20:6-8)

According to tradition, the Nephilim had enormous psychic abilities. They performed levitation, mind control, and remote
viewing. They had the power of pronouncing and removing curses and diseases, and had ways of knowing and predicting the
future. They were extremely intelligent. They knew all about science, architecture, and engineering. They combined these
skills with their powers of intelligence to build the Pyramids and the other great monuments around the world. According to
1Enoch they created human sacrifice. They drank blood, were canniables and taught abortion.

The book of Enoch states,

They certainly tampered with both human and animal gene pools (Jasher) to try and hinder redemption through a human bloodline. They were the heroes of old, the mighty men of renown, talked about in mythology, and contributed to the reason God had to destroy the world and all its inhabitants in the Great Flood.

1 thought on “The Elioud Race”