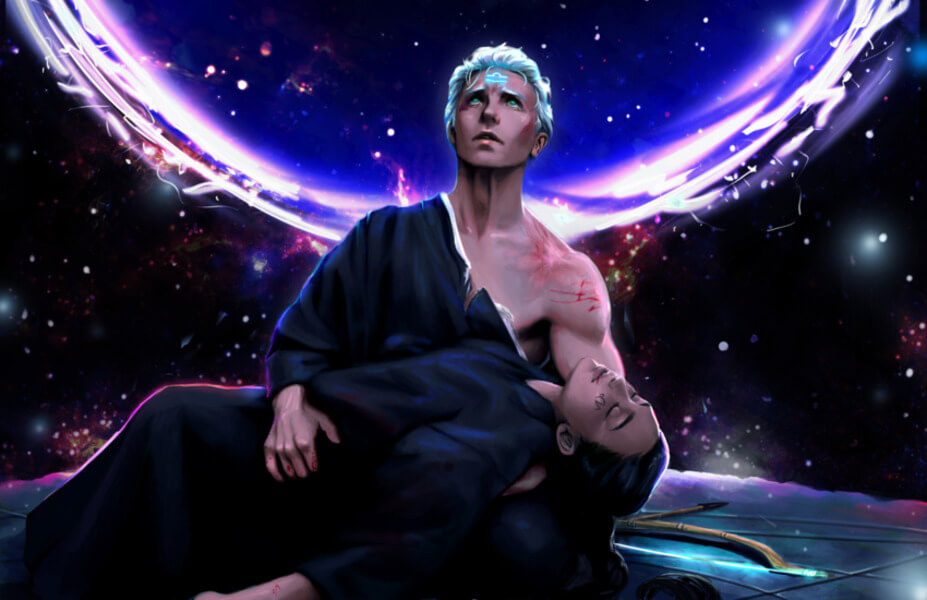 The following are the main characters displayed in this tapestry from the perspective of Earth:

The general area of the “birth” of the humanoid race. All humanoid races in our galactic family have genetic roots connected to Lyra. It is the symbolic harp upon which the song of humanity is played. VEGA A star within the constellation of Lyra. Descendants of Lyra, Vega birthed a race of beings who manifested Lyra’s opposite polarity both in their beliefs and actions. There were frequent conflicts between the Lyran and Vegan races.

A planet within the Lyran system which was the first attempt at creating an integrated society.

A trinary star group, it is known in Earth mythology as the Dog Star. Sirius was one of the first areas to be colonized by beings from the Lyran star group. Sirius embodied the energy of the triadic template and perpetuated the drive toward integration. There is a large variety of consciousness types that incarnate in this system.

This is the main “battleground” for the challenge of polarity integration, seeded from Sirius as well as Lyra and Vega. There is a direct connection with Earth, as explored in later chapters.

An archetype or future-self ideal of Earth, Arcturus assists in healing personal and planetary consciousness. Its vibration, primarily sixth density, has been attributed to the angelic kingdom.

This civilization is intimately connected with Earth. The Reticuli are the primary group instigating abductions (or more accurately called “temporary detainments” since this group always returns the abductee). More will be said about this group in later chapters.

Though some of these civilizations overlap each other in time and may not appear linear, below is a linear translation of the progression of various cultures in comparison to each other.

Once one recovers from the initial shock of the idea that extraterrestrials had something to do with Earth’s heritage, it really seems like a very logical explanation. Why would the human race egotistically believe that it alone is responsible for Earth’s genetic past? Upon Earth, races have “discovered” new races and have begun integrating with them. Perhaps before this occurred, these races never knew the others existed. This model can hold true for the universe as well as planet Earth. How many more ancient drawings of rocketships and their pilots need to be found before humans can break through the fears about discovering Earth’s past?

The most obvious question is this: If the extraterrestrials are out there, why don’t they show themselves? An answer can be found in humanity’s approach to anthropological studies upon Earth. Scientists do not go marching right in to a “primitive” culture waving their cameras and equipment.

These types of cultural assimilations sometimes take them decades to accomplish. In its own eyes, humanity may seem “civilized” enough. However, to a race that has achieved space travel and perhaps even global unity, humanity may seem primitive indeed. Perhaps they are waiting, hiding in the bushes, allowing only a few humans to see them until the signal goes out to the whole of society that they are not a threat.

What if the signal that they are there never goes out to society? What if humanity continues to ignore the evidence, hoping it will all go away? To many of the extraterrestrials, this seems to be the case. All nonthreatening methods seem to have been unsuccessful thus far. The primary game plan over the last few decades appears to be much more profound in its potential to awaken humanity. Some of Earth’s visitors are now using fear. At times society is so quick to validate negativity rather than positivity that humanity’s own framework may now begin to be used to assimilate Earth to its previously denied reality. Fear awakens — rather rudely at that. Perhaps that explains the growing observation of extraterrestrial abduction experiences as a method of awakening humanity to a greater reality.

At humanity’s level of development, a model for the natural evolution of a planet has not yet been formulated. It seems obvious that a civilization would not be able to reach the cosmos and the folding of space/time dimensions if it cannot resolve its conflicts on a planetary level. The expansion of consciousness required for such a leap may be dependent upon the unified whole. If the whole is not integrated and balanced, attempts may be fruitless. Humanity may be experiencing this limitation now, with so many unsuccessful space-launch attempts as well as space program budget restrictions. Earth may just not be ready. Humanity wants to reach for the stars but very often cannot even reach for the hand of its neighbor.

The extraterrestrial connection is important, but what is even more important is developing a global perspective. Expansion will come from action — the claiming of responsibility for Earth by humanity itself. The extraterrestrials will not intervene to clean up humanity’s mess. Earth is entering adulthood and has been kicked out of the nest. It would serve humanity to release its victimhood, claim its divine birthright, and create heaven on Earth. The extraterrestrials can only remind humanity of its unlimited potential. Their communication (and our awareness of Earth’s heritage) can be likened to a dangling carrot. If the human race wants that carrot, perhaps it must do what needs to be done to get it — unify and integrate.