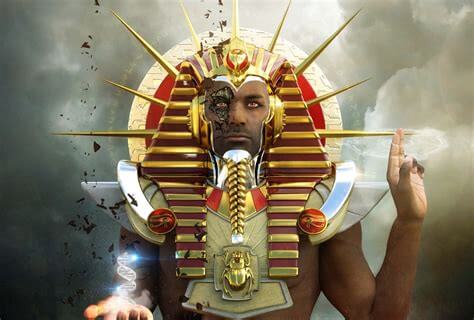 The Anunnaki (also transcribed as Anunaki, Annunaki, Anunna, Ananaki, and other variations) are a group of deities who appear in the mythological traditions of the ancient Sumerians, Akkadians, Assyrians, and Babylonians. Descriptions of how many Anunnaki there were and what role they fulfilled are inconsistent and often contradictory. In the earliest Sumerian writings about them, which come from the Post-Akkadian period, the Anunnaki are the most powerful deities in the pantheon, descendants of An and Ki, the god of the heavens and the goddess of earth, and their primary function is to decree the fate of Sumerians. In Inanna’s Descent into the Netherworld, the Anunnaki are portrayed as seven judges who sit before the throne of Ereshkigal in the Underworld. Later Akkadian texts, such as the Epic of Gilgamesh, follow this portrayal. During the Old Babylonian period, the Anunnaki were believed to be the chthonic deities of the Underworld, while the gods of the heavens were known as the Igigi. The ancient Hittites identified the Anunnaki as the oldest generation of gods, who had been overthrown and banished to the Underworld by the younger gods. The Anunnaki have featured prominently in modern pseudo-archaeological works, such as the books of Erich Von Daniken and Zecharia Sitchin.