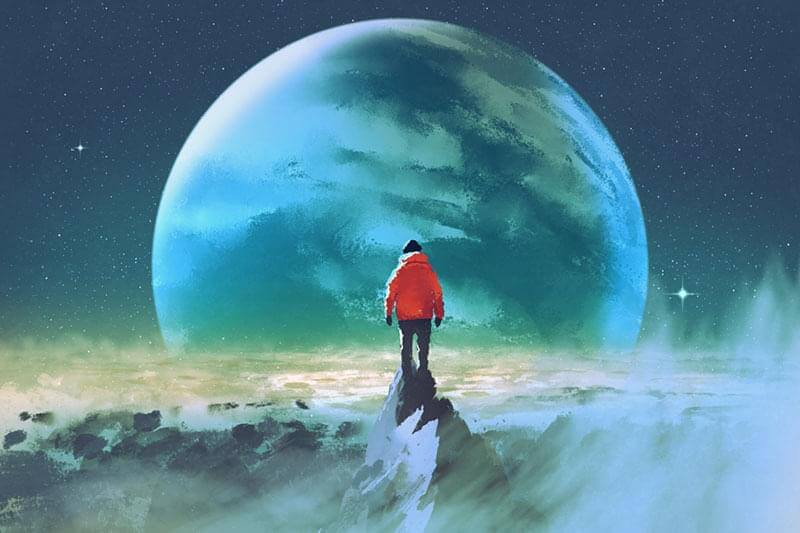 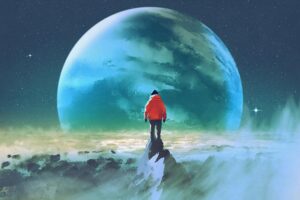 The “ground troops” for Operation Terra are travelers within space and time. In order to carry out our service to this planet’s transition from 3D Earth into 4D Terra, we left our higher-density existence and came down into 3D via a time loop; we will return to where we were before by exiting the time loop. Within the time loop, we experienced many 3D lives and now it is time for us to return to the lives and bodies we were in before. When we are finally in that restored state, we will each move on to our next tasks for the “op.”

Because 4D inhabitants can move rather fluidly within linear time and can bilocate as necessary, those parts of ourselves that are expressing “up there” can also work directly on the ground. They can also work with us from there. More than one of us has had direct experiences of our 4D selves while still in these 3D bodies and as I write this, I feel I am sourcing much more from “up there” than I am from “down here.”

At some point in this overall process (which will depend on our individual functions and roles within the “op” at any given time), our 3D bodies will be totally absorbed/subsumed into our 4D bodies and we will no longer express in 3D bodies except when necessary for certain situations. Everyone who came down into 3D from the higher densities will return to the way they were before, but for any who are not in the first two waves, this will not occur before the evacuation.

Those of us who are part of Operation Terra are different than most of those around us in several important ways:

We came into 3D to take on some of the pain of this world and to transform it within ourselves, which decreases the amount of pain the planet carries and has to release. By accomplishing our own transformation of this pain, we also create an energetic template for personal transformation. Future generations can make use of that template and find their way to Terra, too.

We also came to act as human lightning rods, to ground the higher Light into the planet that will support the necessary cleansing of the planet by flushing out everything that is not in keeping with her destiny as Terra. This infusion of Light is pushing out all of the thought forms that have been absorbed by the planet over millions of years. By our acting as conduits for more and more of this Light to enter the body of the planet, we are actually helping to facilitate the changes that are occurring on a global scale. They have to occur and it is part of our service to support them.

We aren’t here to stop or fix anything in the present world; instead, we intend to participate in creating something entirely NEW that has never existed before. We understand that this present Creation has served its purpose and will be replaced by another one, so our best service is to detach from the drama and to allow the energies to flow without resisting them.

In order to complete the rest of our service to this planet, those of the first and second waves will be returning to where we were before and be AS we were before. We will help with the evacuation of approximately 1/10 of 1% of the present global population (approximately 6-7 million people, plus animals and plants), process them on our ships, and then house them on Midway Station once they are able to function in that frequency band.

The preparations to colonize Terra will take place on Midway Station, a large spherical mothership that is approximately 80% the size of the present Planet Earth, and everyone will proceed according to the next step in their individual journey of service to the Creator. Many of the galactic volunteers will return to their home planets and some of them will be colonists on Terra or instrumental in setting up their home planet’s colony on Terra. Actual colonization will begin approximately 20-25 years after the evacuation takes place.
The individuals from the first and second waves are making their completions with 3D now. Some of their animals are also going to be taken into 4D. Animals and humans will enter 4D somewhat differently, but all of them will return to their previous identities to prepare for their individual roles in the evacuation and afterward.

Once one has completed the shift into full 4D consciousness and awareness, they can appear in any body and location that a situation requires. This ability does not have to be learned. Once the shift into 4D is complete, it is automatically operative and available.

Many years ago, I was shown a technology that is used for the process of clearing the cellular memory. I believe a form of this technology is already being applied to those of the first and second waves while we sleep and it may also be used to complete our clearing process once we have been lifted onto the ships if that hasn’t completed by then.

Translucent ovoid cylinders are equipped with hinged lids and electronic sensors that can detect and interpret a person’s energy field. They can each accommodate one person in a supine position. The cylinder acts as a sort of isolation chamber and its occupant is in a peaceful, unconscious state (similar to very deep sleep) while the process of erasing their cellular memory proceeds.

The sensor readings provide the data that is used to produce a canceling pattern of energy — an exact energetic opposite of the pattern being cleared. The canceling pattern is applied to the person until the sensors indicate that that particular pattern has been totally cleared. The lid remains closed until the session is complete, after which it opens automatically. A technician helps the occupant to get up and go to a rejuvenating pool to rest and recover.

The patterns that need to be cleared have an innate priority with regard to each other, which the technology can detect and schedule additional sessions until all of the residual 3D patterns in the cellular DNA have been cleared. Only the emotional residue or “charge” is cleared. The data itself remains intact, so a person can remember their personal history, but without an emotional charge, it’s just data and not very interesting except as it contributes to something being experienced in a given moment.

This is very similar to some of the radionics machines available on 3D Earth today, only far more sophisticated and complex. Technicians oversee the overall process and make sure everything is functioning properly, but otherwise everything is highly automated. Once a person’s cellular memory has been cleared of all emotional charge, they are ready to take up their new life in a higher vibrational environment, although there is still a time of adaptation to one’s new circumstances while one learns or remembers to function in 4D ways.

(In addition, some form of “radiant” processing (the Messages refer to it as “sonic cleansing”) is being applied to the “ground troops” even now. Many have reported feeling these energies being applied to their bodies and I also have experienced them myself on many occasions. At the time of this writing, it is rare for me to NOT feel them if I awaken during the night or early morning.)

All of the evacuees will initially be taken aboard our ships. After they have had a period of acclimatization on the ships and have actually witnessed the Pole Shift from the safety of near-Earth space, they will each be placed in the cocoon cylinders for further processing. Their vibrational frequency will rise as the heavier emotions are erased from their cellular memory.

Their processing time aboard the ships will clear enough of their cellular memory to allow them to match the vibrational frequency of Midway Station. When that process is sufficiently complete, they will be taken to Midway Station. Once there, their transformational process will continue; it may take an additional 2-3 years before they are ready to be active participants in the actual preparations for colonization.
Midway Station is equipped to adjust its own frequency level and ALL of its occupants will be going through a process that allows them to be gradually raised in frequency until they are at the frequency that exists on Terra.

The preparations for colonization will take several years, as measured in linear time. During that period, Earth will be completing her own transformation. Her present body will remain lifeless and fallow for a very long time. It will be devoid of all water and life. She will transcend that form and emerge in the next frequency band as Terra. Terra will be a totally new planet, and it will take some time for all of its features to appear. During that time, her future colonists will be preparing to occupy her.

Preparations will take place in many locations throughout the galaxy, not just aboard Midway Station. Only the colony of those who are migrating from the present Planet Earth will prepare on board Midway Station and the only reason even they have to do that is because their own planet will not be habitable during that time.
Correspondences specialists will travel between all of the civilizations that will colonize Terra, gathering data and helping formulate the plans for colonization in such a way that all of the colonies will be anticipated and provided for.

By the time all is ready on the planetary surface, the future colonists will also be ready and colonization will begin. Once the first generation of Terra-born natives has arrived and matured, those who made up the transition team will go on to the next step in their individual journey. It is estimated that this will occur approximately 200 years after the evacuation completes, when Terra is fully colonized and everything is in place for that first generation and their offspring.

We all have a front-row seat for the most dramatic time in Planet Earth’s existence. Detach from the drama and remain neutral toward whatever you observe. Surrender IS the way through. There is nothing to stop and nothing to fix, so remember to breathe, ground, and center, and above all, breathe slowly and deeply as you relax into the ride.