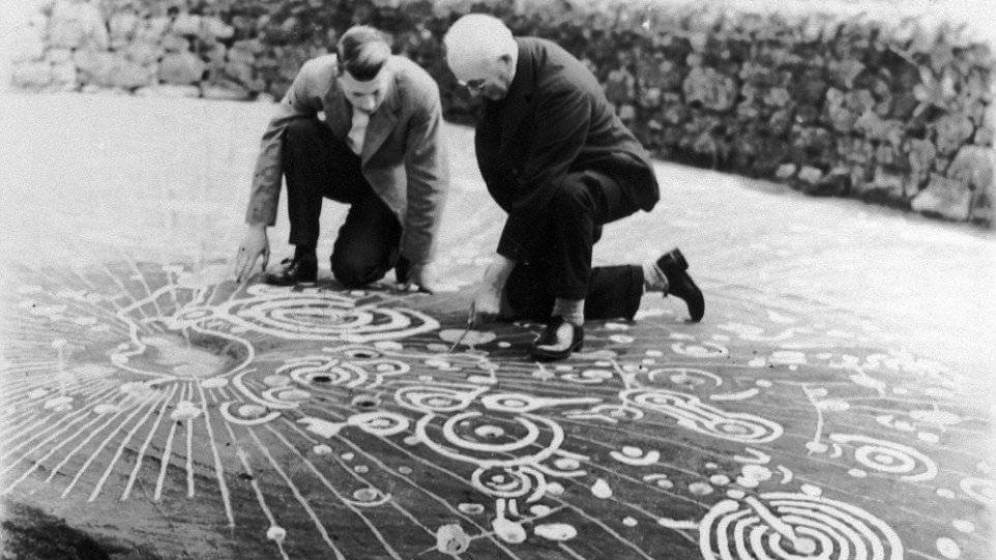 There’s a stone covered in strange symbols located in Scotland. Discovered in 1887 by the Rev. James Harvey, it’s unlike anything else in the region. The intriguing stone features more than 90 curious spirals and markings that some authors have interpreted as parts of a massive cosmic map.

The stone has remained buried for decades oni order to be protected from vandalism.

The ancient stone, which measures 13 meters long by 7.9 wide, was carved with curious symbols in ancient times.

The symbols are one of the most excellent examples of petroglyphs in Scotland.

The stone is located at Auchnacraig, Faifley, West Dunbartonshire, Scotland, next to the Cochno farm.

It is also known variously as “Whitehill 1” and “the Druid Stone.”

Those who have had the honor to study the stone have identified the symbols on its surface as possible planets, stars, and galaxies.

In 1965, after partially studying the enigmatic petroglyphs, archaeologist Ludovic Maclellan Mann gave orders to bury the massive rock under several feet of soil.

Mann wanted to protect it from damage and prevent people from adding their own carvings onto it. Ironically, he was the one who painted a series of white lines on its surface to prove one of his theories; “that the symbols could predict eclipses and were marking movements of the sun and moon in prehistory.”

In 2015 the Cochno stone was partially re-exposed by experts for investigation during a 3-day dig. The study involved archaeologists from the University of Glasgow, with a complete re-exposure following a year later.

The Cochno Stone, which is thought to date back to 3000 BC, is considered one of the best examples of Neolithic or Bronze Age cup and ring markings in Europe.

The exact meaning of the symbols on its surface remains a mystery, and there isn’t a consensus among archeologists about the precise purpose of the symbols.

Is it a sky map? Are they fine examples of Neolithic Art? Or are they a form of written language?

The truth is, we don’t know.

Some scholars have proposed that the massive stone is, in fact, a religious or ceremonial slab.

Although with different markings, similar slabs have been found across Europe, Central America, and even India.

“Some people think that the Cochno Stone is a map showing the other settlements in the Clyde Valley – that’s one of the theories. I think it was probably used for lots of things; it was never used for just one thing and over hundreds of years it changed use,” explained History researcher Alexander McCallum

“As far as the symbolism goes, some believe it’s a portal, of life and death, rebirth, a womb, and a tomb – people believed in reincarnation, so they would go into the earth and then come out again,” added McCallum.

According to the Scotsman, the Cochno stone is one of 30 rock art sites to have been recorded and mapped in West Dunbartonshire, with a further 36 listed in Inverclyde, including three on Gourock Golf Course.