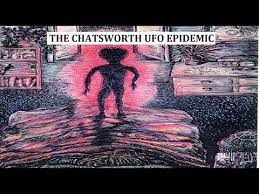 Preston Dennett
On the evening of December 26, 1988, Teri Smith (a physical therapist) went to sleep with her boyfriend Brian in a bedroom in a large condominium complex located in Chatsworth, California. At some point in the middle of the night, Teri woke to a strange thrumming noise and the feeling that somebody was in the room. She found herself unable to move or speak. As she struggled against the strange force, she felt four prong-like “things” grabbing her ankle, causing pain. Terrified, she finally managed to open her eyes and was confronted by a baffling sight. At the foot of her bed was a large glowing misty-like entity. As she sat up, this entity quickly darted out through the closed window of the bedroom. Looking outside, Teri was shocked to see a huge UFO landed in the alley behind the condominium. The strange figure entered into the landed object, which promptly took off straight up. Only then did Teri’s boyfriend Brian finally wake up. He hadn’t seen anything. Neither had three other adults and a child who were also in the condo. But Teri knew what she had experienced. It wasn’t a dream. The next day, the entire experience had completely left her mind. It was only while she was at her place of employment when she felt a strong pain in her ankle and a soreness in her neck that the events of the previous night flooded back into her mind. After work, Teri called her best friend, Traci Stoor, and told her what happened. Traci was shocked. Traci hadn’t told Teri, but Tracy had been having these kinds of experiences for many years. Now it seemed that they had spread to her friend Teri. And not only that, on the same night of Teri’s encounter, Traci’s boyfriend, George, had also had an encounter, and it was identical to Teri’s down to the tiniest detail! This remarkable turn of events was too strange to be a coincidence, and it provided Teri with confirmation that her own experience was absolutely real. Meanwhile, attention turned to Traci, who confirmed both Teri’s and George’s encounters, and also had her own encounters. Traci revealed that she had experienced a face-to-face visitation with an alien entity in a location that one would never expect. This video presents the story of a small group of friends, and how Traci’s UFO encounters spread like a contagion among her two best friends. It reveals many of the standard patterns of UFO contact, and shows how encounters can happen in the least likely locations.