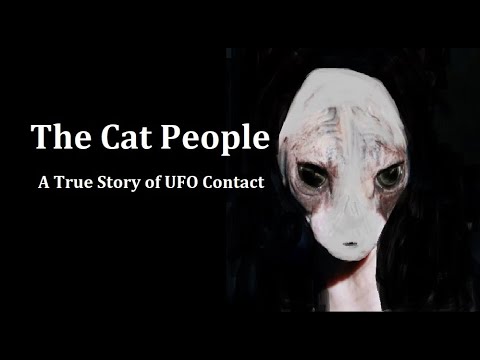 Preston Dennett
In 1956, ten-year-old Robert Hambly (pseudonym) was enjoying an afternoon of ice-skating with a dozen other children in a local park in the small town of Havre, Montana. Looking up, they were amazed to see several silvery spheres scooting across the sky. Robert had never heard about UFOs and had no idea what he was seeing, but he knew it wasn’t normal. Only a few days later, Robert’s life changed forever. He awoke in the middle of the night to see a strange figure standing next to his bed. To Robert, the figure looked just like a three-foot-tall humanoid cat. It had a large, bald head, huge dark cat-like eyes, and a thin body. Unable to move, Robert was filled with fear. After a short time, the figure vanished. But for the next several years, Robert was visited over and over again. Meanwhile, many miles away in Las Vegas, Nevada, a little girl, Melissa Branson, (pseudonym) woke up in her bedroom to see cat-like ETs moving through the wall. She told her parents who said Melissa must have had a nightmare. But Melissa knew better: she had been awake. And when it kept happening, she knew something very strange was happening to her. Later, as a teen-ager, Melissa saw a UFO near her home, but still didn’t connect it to her childhood visitations. Both Melissa and Robert grew up, and many years later, they met, started dating, fell in love and got married. UFOs and aliens were the farthest thing from their minds. But in 1992, UFOs came roaring back into their lives. They watched the television miniseries “Intruders,” and they realized that they both had very similar experiences with cat-like extraterrestrials. They also discovered that there was a history of UFO encounters on both sides of their families. Then came a series of more UFO sightings. It wasn’t long after the UFO sightings that, one night, the cat-like ETs returned. Frightened and angry, Robert mentally fought with the ETs, vanquishing them from his life forever. Robert and Melissa’s case contains unique and interesting elements that provide some important insights into the nature of the UFO phenomenon. Both feel that they were contacted by the same group of ETs who may have even brought them together. Both experienced telepathic contact with the UFOs. Perhaps most important, Robert was able to end his encounters by ordering the ETs to leave him alone. Their case is an important addition to our understanding of the extraterrestrial presence on our planet.

1 thought on “The Cat People: A True Story of UFO Contact”