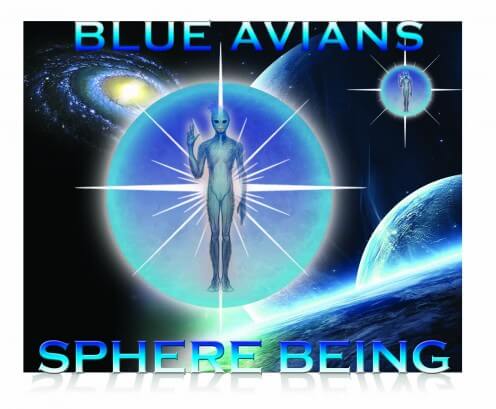 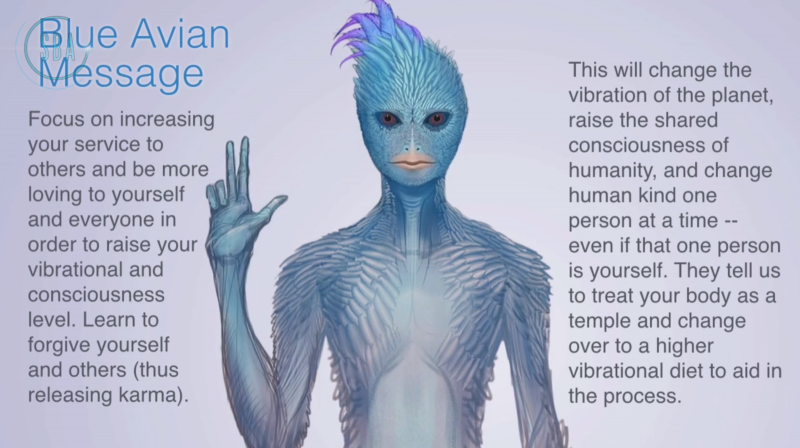 The highest Avian race that I am aware of are the Blue Avians, who remain a bit of a mystery. They are higher dimensional beings, higher than most, inhabiting the 6th to 9th dimensions. To put this in perspective, humans on earth are a 3rd to 5th dimensional group. The Blue Avians have visited earth before with their messages of peace, but unsuccessfully. Their craft are described as spheres, yet they are the size of planets; our solar system is said to be full of them, probably in a higher dimension. The beings are said to be blue and humanoid, at eight foot tall, sort of reminiscent of the movie Avatar except birdlike with bright, indigo-blue feathers. Sounds gorgeous actually. They are working for humanities good against the ruling Cabal of this world.

They have established a blockade in this solar system with their craft, which is probably why the Cabal cannot escape this world as planned with all their arrests imminent. On earth we have up to five top secret space programs that are far ahead technologically than most people realize, yet they are no match for the avian spheres and their own technology. The blue avians are part of the Alliance, along with other races and humans here on earth working against the ruling banking mafia of this world.

Avian starseeds are different because these are the ones born or incarnated upon earth who are originally avian in nature. Place of Origin: The Avian Extraterrestrials originally came from another universe. Now ET Bird Beings are found throughout this universe in many forms.

Dimensional Perspectives:  Exist from 3D on up to 12D

Appearance: Large birds in many varieties and some human bird hybrids

Evolution: There were already highly evolved Avian Species that entered this Universe from another, billions of years ago.  They remain as an elite group of 12D beings.  However, many Avians in this Universe have evolved from small birds that were seeded by the 12D Avians on 3D planets in various galaxies.  They evolved huge diversity of color, size, and adaptations.  Eventually many developed an expanded consciousness because of their ability to see a big picture of their world.  Their sentience developed from their visionary perspective and ability to move via thought.  Some found themselves able to teleport and soar in their minds to other lands and then planets. This expanded their reach and they found themselves inhabiting new worlds.  Later avian species were genetically mixed with humans, as this was an experimental trend in this universe. Birds of Earth are a gift from the higher dimensional Avian beings to help regulate our electromagnetic atmosphere.

Abilities: Bright intelligence that sees from angles that no other can.  Can uplift any situation and take it to new levels of thought. Easily raise vibrations. Free thinkers and feelers that are not bound by confines of group consciousness.  Have a memory that holds the essence of everything they encounter.

Specialties: Higher dimensional forms are often called upon for their natural higher perspective and to raise the bar in any situation. They can be many places at once and usually send only an energetic form of themselves around the universe for consultations. Less evolved avians remain on their home planet and evolve their abilities in their own unique ways.

Basic Needs: Freedom and Honor.  Do not try to confine a sentient avian being. They honor all life and expect to be honored as well.

Focus: Expanding frontiers of thought and creation.  Raising frequency and taking situations and ideas to higher levels of knowing.

Involvement with Earth: Seeded bird species on Earth following the end of the Dinosaurs’ reign. Higher dimensional avian beings have dropped in on Earth civilizations to help enlighten to new perspectives, usually through communications with advanced masters or high priests and shamans.
Guide for Humanity: Thoth (12D ambassador collective)

Star seeds: There are only in the hundreds of thousands of avian souls incarnate on Earth.  These beings do not prefer to work through this confining method.  They often feel uncomfortable in human skin and desire to get out of where they are.  It is disconcerting for them to be confined in any way.   Those avian souls that have braved human incarnation are here to raise the energetic potential of the race and help them to see beyond the astral influences to higher heights. They are cage breakers and will always be looking for ways out of limiting situations by stretching belief systems. They are the Wright Brothers of humanity. Daring to think the impossible dream. They can be found in any field, but often those requiring high intellect and attention to minute details and observations that others miss.  They remember things that others forget.  Avian souls can be excellent detectives or spies. They are inventors, scientists, professors, poets, and innovators of all kinds.  They sometimes pursue their vision at the expense of more mundane things in life, as they can have a mad scientist tendency and be a bit in the clouds. I know I am a Star Seed and I was told to always choose Blue, maybe this is why. Plus my orbs around me are always blue as well. As I continue to wake up and recall my back up files in my brain that I have suppressed or told to forget until a later time it will give me a happier, more  joyful life and love to  share to others. I hope you enjoyed this. It was my pleasure to share this article.

4 thoughts on “The Blue Avians and Starseeds”