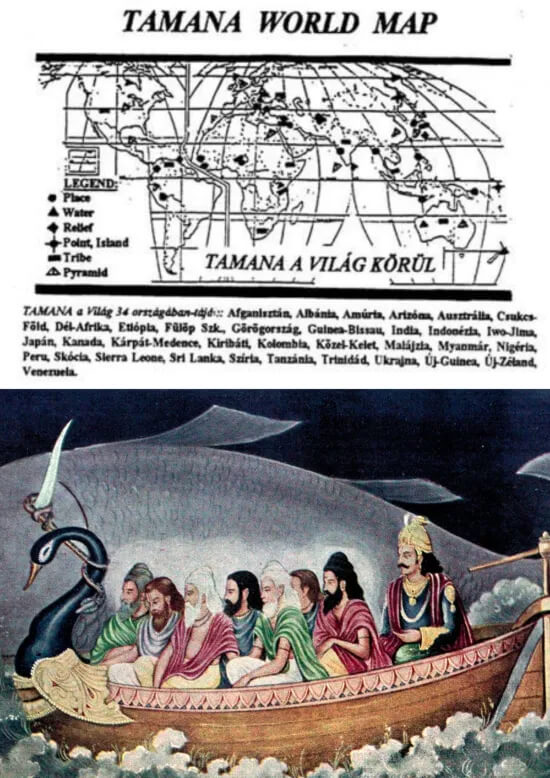 A researcher from a renowned institution has attempted to prove this point by supporting it with a few pieces of evidence that he could gather. Did Tamana: an Antediluvian civilization exist in the distant past?

The Ancient civilization before the Great Flood

Around the world, several sites have been discovered that have houses with a roof in the shape of cones. The discovered houses have a similar structure. These sites are Kukura, Borota in Africa, Borota-Kukula in Hungary, and Kukula in New Guinea.

Vamos Thot Bator, a renowned researcher, has found signs made up of ceramics. The signs are believed to be around 6-thousand years old. All the labels found in Egypt, China, and Europe demonstrated incredible sequence and correspondence to the naked eye. These labels are known by similar names in different parts of the world. Therefore, Dr. Thot Bator claims that this serves as evidence of the fact that an organized culture existed before the flood.

Similarities in expressions and in names of the places were found all around the world. These matches were thousands of kilometers apart, which is extremely astonishing. These are the tests that indicate that an Antediluvian civilization existed in the distant past. It is believed by renowned researchers that an advanced civilization inhabited earth a long time ago.

Dr. Thot firmly believes that at some point there was a universal culture that shared their customs. He specifically talked about a time countless millennia before the present age emerged. He referred to the Pre-Flood time: Tamana. It refers to an expression used to highlight colonial cities.

Places With Common Name In Different Parts Of The World

Another of Thot’s discoveries is related to similar names of the places that have been obtained in various parts of the world. For example, a little over 10 years ago, the researcher found some specimens in his home, the Carpathian basin.

Later it was discovered that similar models were also found in locations outside of Europe. In addition to that, a few years later it was revealed that 5,800 Hungarian names are repeated in 149 countries around the planet. More than 155 of those Hungarian names can be found in Oceania, America, Africa, and Eurasia.

In what areas do you get these repeated names?

The names of the Tamana sites have been found in various rivers and towns in recently discovered areas. Others of them are localities discovered around 150 or 100 years ago that had not been known geographically.

It should be noted that even if one town replaces another, the topographic name of a site almost always remains unchanged. For example, take the city of Chicago, whose name was originally assigned by its Native American inhabitants.

The name Tamana is a term used in a total of 24 zones around the world. Dr. Thot was the one who discovered that this title had also been given to a river located in northern Ontario. Now, the name belongs to a place that is located in a swampy and isolated place.

This space is near Hudson Bay and represents a superfusive-infusive survival derived from the word “Tamana”. However, what is the true meaning of this word?

Meaning of ‘Tamana’ in different places

The term ‘Tamana’ holds great value in the languages ​​of India, which are the Dravidians Similarly, in the Magyar language, in Hungary and the Manding, in the African continent, the word represents the same: “Original settlement”, ” Strong place, Fortress”.

The people who inhabited ‘Tamana’ are suspected to be from West Africa. It is assumed because the residents of ‘Tamana”, spread throughout the planet after the flood occurred. In another vein, some experts mention that this event took place about 13 thousand years ago.

The researcher Sitchin believes that everything happened due to a climate change that led to the thawing of Antarctica. This historical event has been widely mentioned in various books, legends, and traditions.

Legends where the story of the Flood is written

The mention of the Great Flood can be found in almost every culture of the world. In the Bible, we find the story of Noah, the man commissioned by God to build an ark that would eventually save humans and animals. The legends of the Great Flood are also mentioned in Mesopotamian and Indian writing. So it is clear that there is logical evidence that there was a great dispersion of the Tamana people.