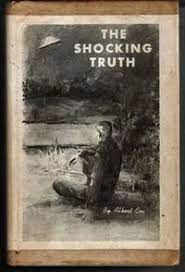 Since the 1950s, there have been a plethora of alien sightings and UFO encounters. One such encounter is that of Albert Coe, which happened in the middle of the 1920s but wasn’t made public until the late 1960s. When Coe was 16, he had an enigmatic encounter with an alien. His account is noted down in the book titled “Alien Base – The Evidence For Extra-Terrestrial Colonization Of Earth,” published in 1998 by profound UFO researcher Timothy Good.

The Alien Encounter Of Albert Coe

If true, Coe’s account lends credence to the Ancient Alien Hypothesis. During a family vacation to Ontario in June 1920, Coe set off on his own to hike the highlands near the Mattawa River. His plan was to do some river exploring and then meet up with his family for a canoe trip. He was enjoying himself beside the river bank and was smoking a cigar by the river. Suddenly he heard a cry for help. He looked around the area to look for the source of the voice. A five-foot-wide cleft angled toward the river caught her attention.

As he looked further, he saw that there was a blond stranger stuck in the gap, about two feet and a half below ground level. He was badly hurt and unable to use his other arm. Coe was unable to free the stranger with his bare hands, which is why he rigged up a way to haul the guy up using his ropes and gear. After he rescued the stranger, he noticed that the stranger was unable to move around due to his injured leg. Apparently thirsty, he inquired as to whether or not Coe had any water. So Coe brought some water in his hat from the river and offered it to the stranger.

Moreover, Coe helped the injured stranger by using his own handkerchief to cover the wounds sustained by the stranger. During the time when Coe was helping the blonde man, he became aware of something strange about him.

“He was wearing an odd silver-grey, tight jumper-type garment… It had a leathery feel without a belt or visible fasteners attached, but just under the chest was a small instrument panel.”

Albert Coe wrote this in his self-published book The Shocking Truth (1969).

Coe became intrigued and respectfully inquired about the stranger’s identity and what he was doing there. The stranger replied that he had come there for fishing and he had reached that location in a plane that was parked very close to the location. Furthermore, the stranger thanked Coe and expressed a desire to board his jet. Coe asked the stranger to accompany him to the jet, but he refused.

Soon, when the stranger moved further, he realized that he could not walk without his help, so he agreed to the company of Coe, but on the promise that Coe would not reveal anyone about their meeting and the jet he was going to see. As a result, Coe saw the plane built by the stranger’s father. What he saw freaked his mind. “A round, silver disc, about twenty feet in diameter, was standing on three legs in the form of a tripod, without propeller, engine, wings, or fuselage.”

Since there was no window, Coe was puzzled as to how the pilot or navigator could see outside. The mysterious man explained that the craft was still in the “experimental stage and very secret.” The stranger told Coe that he was allowed to use the plane occasionally. The underside of the craft was divided into three sections, each of which could be accessed by a short ladder that was exposed when the stranger activated a button.

The stranger expressed gratitude to Coe for his assistance and then gave him instructions to get out of the way before the plane took off. After receiving the instruction, Coe relocated a great distance away before the flight.

“At first it gave off a low-whistling sound, picked up speed mounting to a high pitched whine, finally going above the audible capabilities of the ear. At that time, I experienced a throbbing sensation that was felt rather than heard. It seemed to compress me within myself. As it lifted a few feet above the ground, it paused with a slight fluttering, the legs folded into the recesses as it swiftly rose with the effortless ease of thistledown caught in an updraft of air, and then it was gone.”

Coe was bewildered since what had happened to him seemed impossible. He encountered the stranger again after six months. At the McAlpine Hotel in Ottawa, Coe received a memo containing information about his meeting with a stranger named Xretsim. A part of him wondered if this was the same man he’d talked to by the river. It was definitely the same stranger that he met at the river.

Due to a portable electronic item, he was carrying, Coe felt a peculiar sensation from the stranger’s hand as they shook hands. Coe later told Dr. Berthold Schwarz that the device “registered ‘Vibrational frequency’ of his body, the data from which could be shown on a television-like screen elsewhere.” According to him, his frequency was on the database, his every move was “monitorable”.

Coe said, “They did this to make sure I would keep my promise.” When Coe met the stranger the second time, he got to know that the stranger’s name was Zret. He wanted to ask Zret a lot of questions, but Zret told him that he would answer all of them at the next meeting, and he told Coe that he would meet him after several months. The next year, they met in May, and they kept doing so for the next 50 years.

In the end, Zret told Coe everything there was to know about him. Zret told Coe that he was one of a tiny group of aliens who came to Earth to study our civilization’s technological progress. In the language of humans, he was working as an electronic engineer. His people have been around for a very long time. But this mission started in 1904, when 100 people like him “infiltrated every major nation of the planet – as small groups of technicians – to observe and evaluate” each step forward in human progress.

“In earth’s time standard, I am exactly three hundred and four years older than you. This reversal to youth was a vital requirement is establishing our identity as earthlings, for the foundation block in the fulfillment of our mission here, depend upon being accepted by your various races, as their own.”

Zret explained to Coe that he had fallen near the river and broken the panel on his chest, rendering him unable to send distress signals to his base. During further meetings, Coe learned about the Zret’s civilization. Albert Coe was informed that the origin of Zret’s planet was called “Norca,” which was 12 light-years away from Earth and orbited the star Tau Ceti. Roughly 14,000 years ago, Zrets’s biosphere began to shut down, prompting the natives of the planet to look outside the solar system for potentially livable worlds.

Zret revealed that during their trip to Earth they also met Cro-Magnons, the earliest human beings, and they set up bases on Venus and Mars. Sixty-two massive carrier ships, each capable of transporting thousands of Norcans to their new home, were used in the evacuation. Thousands of people perished when their ships went down and they were forced to make an emergency landing on Mars. They had lived on Mars for thousands of years, enduring its terrible conditions.

To ameliorate their situation, they eventually dispatched two ships: one to Venus to investigate the atmosphere, and another to Earth to transport the bulk of the population. Coe said that everyone on Earth had dark hair and dark eyes. When Norcans started mating with humans, people with blue or green eyes and different skin tones started to appear.

“Interestingly, the locations offered to their “settlements” and the alleged point in time it occurred would lead some people to draw connections to this apparent mystery civilization and the legends of Atlantis.”

Zret also revealed that there are still many Niorcan bases on Venus and that they also carry out various experiments on Mars due to its thin atmosphere. Coe never revealed anything about his extraterrestrial encounter, but he finally told his wife in 1950 about his encounter, who was shocked. No one can say for sure if Coe’s tales are accurate, but he certainly didn’t benefit monetarily from them. He just self-published a book detailing his experiences.