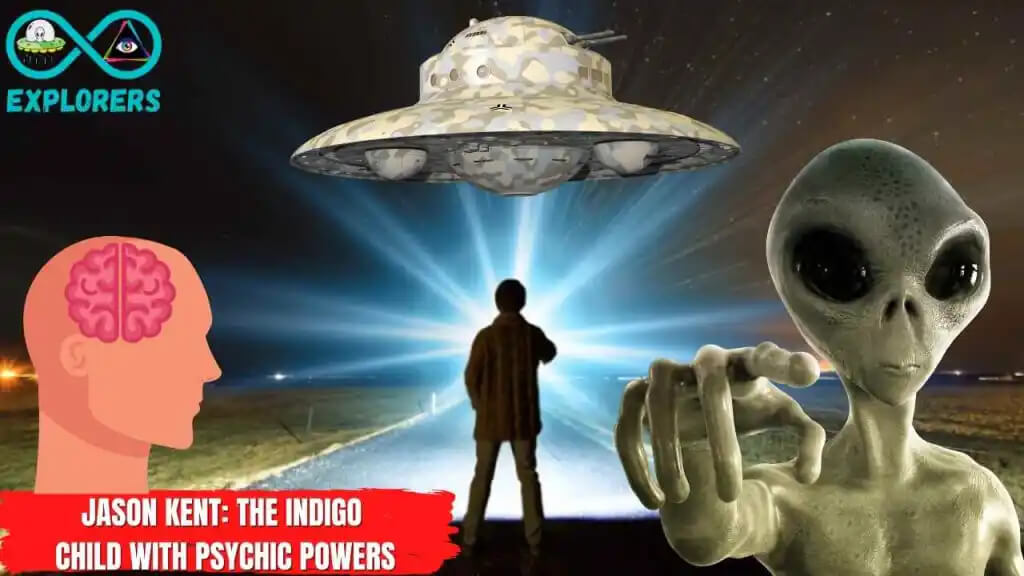 For some reason, there are certain people who draw alien forces towards themselves and are allegedly abducted multiple times.  One particularly unique story arose from England, involving a young boy named, Jason Kent, who was not only constantly visited by alleged alien beings, but he also showed some strange psychic powers and an odd connection with these things, making his case much stranger than most.

The Alien Abduction Of Jason Kent, The Indigo Child

Jason Kent was enjoying his fourth birthday in July 1987 at his rustic country home near Slade, Green in Kent when the first incident took place. It was a happy day for everyone involved; the weather was pleasant, and everyone was having a good time, but then things took a bizarre turn.

Dark clouds swept in seemingly out of nowhere and thunder began to rumble, forcing everyone indoors as heavy rain began to fall. As they all stared out the window, perplexed as to why the sunny day had abruptly become dark and stormy, there was an unbelievably intense flash of lightning, almost blinding in its intensity, and that’s when young Jason began to behave strangely.

He appeared to enter a trance, at which point he began blurting out intricate mathematical equations, including what his mother described as “amazing figures, technical numbers, unusual algebraic arrangements, and mathematical terminology like ‘pi’ and ‘binary codes‘.” It was well beyond the comprehension of a four-year-old, and indeed, even the adults present had no idea what they meant, and he continued swiftly rattling off these cryptic equations and figures for many minutes until abruptly turning to his father and he calmly said:

“They are waiting for me. I have to go.”

Before Jason’s father could understand what was happening, he was forced to open the door and he stepped outside into the pouring rain, his father caught him just in time to stop him. Jason supposedly argued with his father, adamant about leaving the house, and then the storm passed almost as quickly as it had arrived.

The dark clouds dispersed, the thunder ceased its continuous fury, and the sun shone once again. Jason regained his composure, but when his family inquired as to what had occurred and what those numbers meant, he appeared to have no recollection of what had occurred. Indeed, he did not appear to be aware that a storm had occurred at all.

Following this bizarre occurrence, Jason Kent began having frequent intense dreams that became so awful that he frequently woke screaming and shouting in the middle of the night, causing his mother to rush to his aid.

He never appeared to be aware of the nature of the nightmares, which simply grew worse. His concerned parents brought him to a variety of psychiatrists, psychologists, child behaviorists, and sleep specialists, but no one could figure out what was wrong with him or why he was having such intense nightmares. At the age of 12, he began to realize what was happening during these somewhat horrific overnight occurrences, with some of the memories leaking into his waking times, and he would one day tell his mother what he remembered from these incidents:

It’s always the light that comes first. Then I see the tall one rise up at the foot of the bed. Suddenly there’s lots of little ones everywhere. They’re fuzzy and indistinct, and they move very fast. I can’t move or speak, but I’m awake and I can see and hear and feel. I want to scream and run, but the sound doesn’t come out and my body doesn’t move. I hate them. I hate them. I have to go with them. They take me to an operating theater, like at the hospital. It’s all white and shiny. Sometimes it’s a circular room with a metal floor. It’s always cold. They’re there. The big one touches me but I don’t feel it, like as if I’ve had an anesthetic. But you don’t believe me, you just think I’m making it all up.

At first, his mother did not believe him, but Jason insisted it was true, sticking to his narrative over the years, and his older brother Daniel concurred. Ann was perplexed enough to begin researching UFOs and extraterrestrial abductions, inquisitive as to what might be happening. In a conversation with researcher and author Sean Casteel, she stated the following:

Even at that point, though, we were not convinced, but rather we believed that Jason believed it, and it was this belief of his which drove us to searching for books and information. We thought that the more we could learn about this subject of UFOs and aliens, then we would be better armed, as it were, to help our son. We were not ready for what we actually discovered; we could not believe the similarities between some of things Jason had been saying since he was first able to speak, and what we were reading. His story had not changed in all those years. I would add, however, that we did not accept this situation just like that. My greatest regret in all this is that it took me so many years to accept it.

Ann would eventually contact actual UFO researchers in an attempt to ascertain what was going on, with one researcher and author Jean Ritchie speculating that these aliens were interested in him because he was psychic or special in some way, perhaps what is referred to as an “Indigo Child,” a child who is particularly spiritually attuned to the universe and is frequently described as having a special connection with aliens or even as an alien-human hybrid.

Over time, these claims of psychic skills would reportedly prove to be genuine, with Jason Kent demonstrating a variety of psychic abilities that he possessed or had been granted by his otherworldly abductors. Ann would later state the following about this:

Daniel certainly still has certain abilities, which I know have something to do with the ETs and go back to when they were actually interacting with him. He has the ability to ‘know’ someone just by shaking hands with them. He can tell what sort of person they are, how their life has been so far, family stuff, etc. He would be worth his weight in gold probably to a big corporation in the recruitment department, but he won’t acknowledge this ability and sees it as a curse rather than a gift. You have to understand that when Jason was growing up, until his early teens, he was terrified of his experiences. It wasn’t until he started to overcome his fears and listen to ‘them’ that he started realizing his abilities—abilities that he says everyone has but which are just lying dormant. Over the last few years, he has really excelled in what he does, although his mind reading can be quite frustrating at times. It means that you can’t keep secrets.

Along with all of it, some additional unusual occurrences occurred on their rural property. According to Jason’s family, they had some cattle die for unknown reasons, and while local law enforcement determined that the fatalities were caused by salmonella illness, a myth circulated that an Army major had supposedly told villagers that the deaths were actually caused by a microwave experiment.

The family stated that military officers began to appear in the region on a regular basis and that they were eventually instructed to vacate their property, forcing them to relocate to Lincolnshire. What was going on here, and how did this relate to Jason Kent’s bizarre experiences and newly acquired abilities? Ann has stated what she believes about all of this:

I believe that the powers that be resented the fact that ETs would want to interact with ordinary people. It all comes back to their power plays eventually. Perhaps they thought that by getting rid of us, that the ETs would start interacting with them. It could also be that the base at Mereworth has some sort of underground facilities, too, and I now feel that the deaths of our cattle and other animals were all connected to the military as well as—or instead of —the ETs. It could be that they were concerned that we might be affected by some sort of new technology they were using. After all, it’s easier to cover up animal deaths—which they did by blaming salmonella—than to explain human deaths.

Jason’s alien visits were less frequent as he grew older, eventually ceasing entirely, but he kept his psychic abilities and, according to his mother, even healing abilities. She has evolved from that fearful, initially suspicious lady to believing that Jason Kent is a “walk-in,” or an alien soul possessing her son’s human body and capable of traveling between the two planes of existence.

Additionally, she has published a book on Jason and UFOs in general titled Jason, My Indigo Child, which details their experiences and challenges throughout the unusual event. What is it about this youngster that attracts such forces? What were their intentions with him? What does any of this truly imply? Is there any substance to it at all? It is undoubtedly one of the more intriguing repeat abductee cases ever documented, and regardless of the solutions, it is all very unusual indeed.