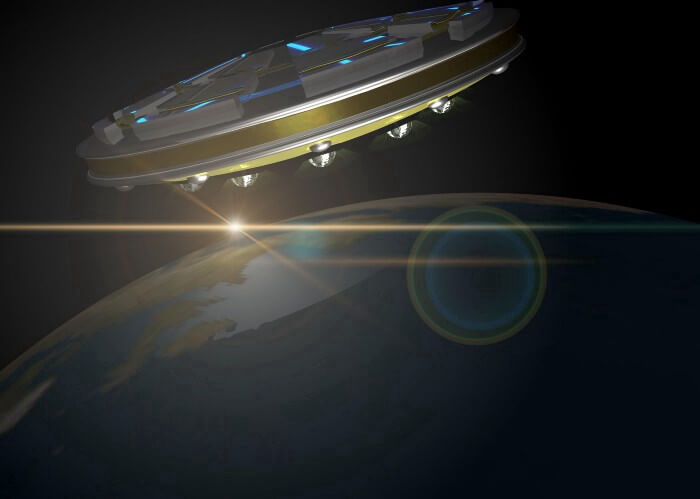 Many people are fascinated by the idea of Unidentified Flying Objects (UFOs). They are especially intrigued about whether aliens have visited our planet in the past and continue to do so.

Movies, TV shows, and science fiction books and magazines have long popularized the idea of visitors from outer space. These fictional alien visitors are occasionally benign (but usually not) and are indeed often quite hostile and thus pose a real threat to humans.

It’s fun to watch these sorts of fictional depictions of alien beings visiting the Earth, whether the visitors come in peace or not. However, most people don’t take very seriously that space-faring aliens are real, even though there have been many UFO sightings reported over the years since the 1950s, with photo and video “evidence” sometimes offered up as proof. Skepticism still abounds, though, especially since a very tiny percentage of the Earth’s population has actually seen a UFO themselves, in person.

I was a skeptic too. But I’m here to tell you that I became a believer.

Why so? Because when I was a young man stationed at Marine Corps Air Station in Iwakuni, Japan, in 1972, I saw a UFO with my own eyes one night while sitting on the seawall that protects the Air Station compound. That seawall was, and I assume still is, a popular place to sit and take a break from work duties, in the daytime or at night, whenever the opportunity presented itself.

One pleasant evening, I found myself sitting on the seawall gazing up at an overcast sky that obscured the stars. I wasn’t thinking about anything in particular, other than how nice the breeze felt that night. Then all of a sudden I noticed a very distinct, spherical “light” moving incredibly fast in a horizontal direction.

Before I could finish marveling at how fast that “light” was traveling — faster than anything I had ever seen before — it abruptly changed direction “on a dime.” It went straight up vertically at the same fantastic rate of speed until it disappeared from view beyond the cloud cover. All of this movement took place in a matter of a few seconds and mesmerized me, as you might imagine.

Maybe you think my eyes were deceiving me, and what I witnessed was just some sort of natural phenomenon or was a human-made object. Well, first of all, even to this day, there is no human-made object that moves that fast, nor with the ability to make such an extreme, sharp change in direction as if it were navigating a “hairpin curve on steroids”. Such a feat is aerodynamically impossible based on all known technology humans currently possess.

As for the possibility of what I saw as being a naturally occurring phenomenon, I’ll grant you that such an event is a more plausible explanation than a human-made object being the reason. However, I ruled out that theory after considering the blazing-fast course correction the object made. It changed from a horizontal to a vertical path in the blink of an eye while traveling at the same speed. What sort of natural phenomenon could that possibly be? I’m certainly not aware of any and don’t believe such a thing exists.

I thought long and hard about what I saw that night, and have pondered it many times over the years since then.

The conclusion I have always reached is that the incredible “light” I witnessed that evening was indeed a UFO. So, yes, you can put me down as one of the believers.

But I am far from the only believer these days. I have plenty of company because, over the years, there have been lots of unexplained phenomena showing up in Earth’s skies. Thus, many people have had personal experiences like mine. And more and more of them are coming forward to tell their stories about what they saw.

Despite stonewalling the public since the 1950s about the existence of UFOs, the Pentagon finally came forward recently with what many believe is proof in the form of videos taken by military pilots. Nowadays, the Department of Defense refers to these sightings as “unexplained aerial phenomena (UAP).” The videos are embedded in a BBC article online entitled “Pentagon releases UFO videos for the record.” if you want to take a look for yourself. But the reality is that the vast majority of people have NOT personally experienced a UFO sighting, so most of them likely remain skeptical.

Nonetheless, movies about aliens from outer space have always been popular and remain so to this day. One of my favorites is Close Encounters of the Third Kind, starring Richard Dreyfus. The ever-popular ET is another movie featuring a friendly alien. The aliens in those films turned out to be benign, but that’s often not the case in these kinds of science fiction movies. For example, maybe you’ve seen the movie Independence Day with Will Smith. Those aliens were definitely up to no good!

While it’s fascinating to think about what would happen if aliens did come to Earth, maybe human society and our technology need to evolve a lot more before we face such a situation. If not adequately prepared for an encounter with aliens, we might be able to luck out in the end as we did in War of the Worlds. In that movie, based on the famous H.G. Wells book and a classic radio show version by Orson Welles, the aliens, after causing massive destruction, were ultimately killed off by a common-variety virus to which they had no immunity. However, it would be a grave mistake to count on something like saving the day for us in real life.

How ironic that right now, the people of Earth are furiously battling against a real virus that’s viciously and indiscriminately attacking us. We’ll have to win this war against COVID-19 all by ourselves because no self-respecting aliens from another planet would come anywhere near us. And who could blame them?

So look to the skies from time to time. You might see a UFO/UAP just like I did.