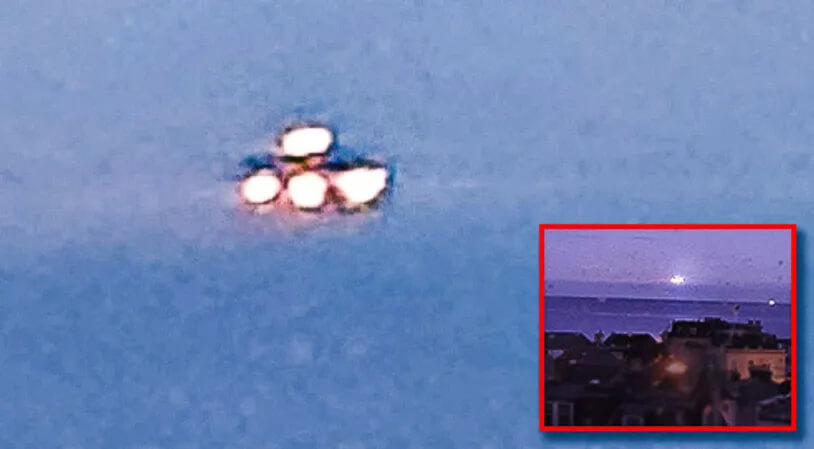 05 July 2021 – Latest UFO sightings: A student in the UK managed to snap some astonishing photos of a triangle-shaped object hovering over the coast before it zoomed off into the distance.

Unlike most UFO photos, that look like they’ve been photographed with a potato, these pictures (see below) were of fantastic quality and clearly showed the object.

Matthew Evans, 36, saw the UFO hovering for around 10 seconds above the coastline in Devon, UK.

He saw it whilst looking out of his flat window and quickly got out his phone to take some photos. He managed to get some decent-quality shots before the object took off at a high speed.

He said, “It was moving a lot slower and went up and down for a bit before hovering a good 10 seconds.”

The pictures show a triangular-shaped object with four bright lights hovering over the sea.

UFO sightings like these have often been attributed to an optical illusion, where the object looks to be hovering but is really a ship or boat in the distance. However, this seems unlikely as it “zoomed off at some speed…” according to the observer.

This comes weeks after the much-anticipated UFO report from the US government which described a number of sightings by US government officials that were unexplained.

These included the objects remaining stationary in strong winds, moving against the wind, maneuvering abruptly, or moving at a considerable speed, without a discernible means of propulsion!

The report stated that the UFOs, which they call Unidentified Aerial Phenomena (UAP), pose a national security risk and that more efforts must be made to better understand them.

Interestingly, although a possibility, the US government believes it is unlikely that these objects are from another nation (China, Russia, etc.)

Specifically, it went on to say there is currently little data that indicates that “any UAP are part of a foreign collection program or indicative of a major technological advancement by a potential adversary.”

The US government believes it unlikely that foreign countries are responsible for the UAP sightings!

With the US government acknowledging unexplained sightings of UFOs with advanced propulsion methods, we have to take this UFO sighting in the UK seriously.