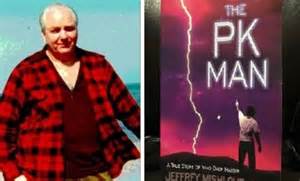 A man named Ted Owens, who lived in the United States, for decades tried to tell the world about his superpowers, but he was not only not believed, but also ridiculed and called crazy. Moreover, he repeatedly proved his words.

Contactees in Ufology are those people who were not just abducted by aliens, but had repeatedly met with them, and also received information from them.
Some contactees received messages from aliens about what alien civilizations exist and how they work, others received warnings about the future of our planet.
At the same time, contactees were just as often subjected to humiliation and painful medical manipulations as ordinary abductees.

The case of Ted Owens is one of the rarest, because in addition to all of the above, he also received unusual psychic abilities from the aliens.
It began in those years when the UFO phenomenon was known only to rare researchers.

Ted Owens was born in 1920 in the USA and due to the fact that his father was cruel to him, he was taken to his grandparents.

When Ted grew a little, his superpowers appeared, he began to move objects with his eyes and learned to levitate in the air, experimenting in his room.

Then he had an “imaginary friend,” who from time to time told him how to use these abilities. When Ted became a teenager, he learned strong hypnosis and sometimes arranged tricks with public hypnosis, each time striking his surroundings.

And when he grew up and joined the US Navy, his psychic abilities became even more powerful. According to Ted, he could easily read the thoughts of his colleagues.

After the army, Ted Owens entered Duke University in North Carolina and told everyone there that he could control the weather.

Some of the people, including the famous city lawyer Sidney Margulis, saw some of his tricks with their own eyes, for example, as Ted made lightning strike at the right time and place.

When Ted got married, his wife also began to see various unusual things, and during the drought Ted could order the rain to fall from the sky.

He also said that he could even cause severe hurricanes. Owens also joined the Mens Club because he had an unusually high IQ.

Years passed, by 1965 much more people were already aware of UFOs and aliens than before and Ted decided to confess.

He said that his superpowers (as well as the superpowers of his grandparents) were actually presented to him by a kind of “supermind” – “hyperspace beings”, which Ted described as “short grasshoppers with two legs.”

He said that these creatures specifically decided to give him almost unlimited psychic abilities in order to conduct an experiment on whether a person would withstand this.

He called it “increase the brain to 11 points” and compared with the superpowers of superheroes from comics.

As proof of all that was said, he, among other things, showed an unusual mark at the base of his skull, supposedly in this place he had an unpleasant operation and it affected his brain.

Every year, Ted Owens tried to draw more and more attention to his surroundings.

In the 1970s, Ted began arranging public shows to talk about his superpowers, and also made many predictions about the future.

However, practically no one took him seriously anyway, people did not believe him, but they constantly showered him with ridicule. After that, Ted changed a lot, now instead of his usual stories, he began to make a frightening statement that he would use his power to destroy.

And he, too, was not believed at first, until some of his predictions began to come true. In May 1972, he announced that he was going to cause massive thunderstorms that would cause a blackout and an accident in Cleveland, Illinois, and in the summer of that year a severe storm swept through Cleveland, causing not only a massive blackout, but also numerous human deaths .

In October of the same year, Ted announced that he was going to create an unusually warm winter in Virginia, and so it happened.

In 1974, Ted made a statement that it was he who was behind the series of weather disasters that hit Texas this year and caused great damage to the crop.

He also said that he was responsible for many unusually strong and frequent hurricanes, floods, droughts, earthquakes, fires and plane crashes that swept the world in the 1970s.

Owens also predicted that UFO sightings around the world would become more frequent and that he had the ability to specifically trigger UFOs anywhere.

Ted also repeatedly tried to make money on his abilities, for example, to cancel a hurricane in exchange for cash.

He also tried to sabotage sporting events, extorting money, otherwise he would send a fire or flood to the right place.

It is not surprising that soon they began to just consider Owens as a madman who seeks attention by calling on television, in various magazines and trying to contact government officials.

Nobody wanted to listen to him. In 1979, Ted began to harass military historian and journalist for the National Enquirer Wayne Grover, assuring him that he could witness how he would use his superpowers in Florida for a year.

“My experience with Ted Owens began in 1979, when he first contacted me by writing a letter.

He said that he could control the weather and predict events that were met with skepticism and me and my editor Don Horin.

I answered Owens. Angry Owens wrote again that he can prove everything and that he can call a UFO.

Khorin became interested and we agreed that we would collect several witnesses, including a scientist, and he would show us a UFO that night.

But two said that they did not see anything and then we refused to publish material in the journal.

Owens was angry again and felt betrayed. After that, Owens called me and made the following predictions for the year: “I will activate the three June hurricanes and make one of them walk right through the National Enquirer headquarters. In addition, I will use my mental abilities to ruin the life of Don Horin and he will regret the day when he laughed at me, “said Wayne Grover.

Owens’s predictions soon began to come true. The state of Florida suffered from the worst drought in 40 years, and then there was a very strange series of hurricanes and a newspaper building, and the truth was hit by them.

Also, the personal life of Don Khorin went awry – the problems went one after another, and then he was fired and his wife left him.

All this time, Owens continued to write letters to Grover and continued to make predictions and predictions that continued to come true. “After some time, a certain trust arose between me and Owens, we talked for a 5-year period during which he called me several times a week, usually after midnight, and made predictions for various disasters – hurricanes, tornadoes and other incidents to the whole world.

I also regularly received letters from him, often with strange signs or patterns, which he signed with his nickname “PK Man”. As a rule, forecasts were made 5-10 days before real events. When I watched TV and saw another event predicted by Owens in the news, I told my wife, “Another point in favor of Owens.” When the event took place, he immediately sent me three proofs of his gift – a record of the prediction from the phone, a copy of the letter with the forecast and a cassette from the TV, which spoke about this event.

And as much as I did not want to believe Owens, he was right over and over again. His predictions were accurate in about 80% of cases.

” This was enough for Grover to finally believe in the power of Owens, and then he began to beg him to stop the drought in Florida and to cancel another hurricane that was aimed at the state.

After these requests, the hurricane nevertheless passed, but it suddenly turned out to be much weaker than predicted.

According to Grover, Owens answered his request because he was the only one who believed him. “In September 1979, when Hurricane David walked to West Palm Beach, I talked with Owens for more than 2 hours at night.

I told him that thousands of people would lose their homes, and he told me that he just didn’t want to harm me and my family, so I’ll try to do something, but I’ll have to watch the news on TV. At 5 a.m., the local television weather forecast began to broadcast again about the impending hurricane and suddenly David had shifted from his route, he had stopped moving to West Palm Beach and turned north.

Only a slight crosswind would have reached the city and that’s it. At about 7 a.m., Owens called me and said, “It was Wayne for you.” I did not believe that this could be possible, but everything went as Owens said.

I recorded this incident, and when a violent storm again threatened Florida in the next hurricane season, Owens called me and told me to go to an elevated place.

I said that we don’t have any elevation here and then he answered again, “I will take him away from you because you are the only one who believes me.” And a hurricane went around our places, instead attacking Charleston, South Carolina and devastating it.

During the last stormy season, I again had a conversation with Owens and he promised me that he would remove the hurricanes from Florida, taking them south to the open Atlantic. ”

This unusual correspondence between Grover and Owens ended as strangely as it began. Owens suddenly fell silent for a long time, and then in 1987 he again contacted Grover and asked him to move to upstate New York so that the UFO would take him and his family there.

After that, he no longer contacted Grover. A few months later, in the same 1987, Owens suddenly died of liver sclerosis and since then various ufologists and researchers of abnormal phenomena regularly study his history without finding answers to their questions.

One of these researchers, parapsychologist Jeffrey Mishlov, carefully studied all of Owens’s well-known predictions and is convinced that he really had superpowers.

He also foresaw the Challenger crash in 1986. Mishlov wrote about Owens a book called The PK Man: A True Story of Mind Over Matter, which is the most complete life story of Ted Owens.

Mishlov analyzed a lot of facts and is sure that strange cases with Florida hurricanes and many others can be explained only by the influence of some superpower.

At the official level, the phenomenon of Ted Owens has never been studied, for scientists it is nothing more than a charlatan, a fraudster or a mentally unhealthy person.