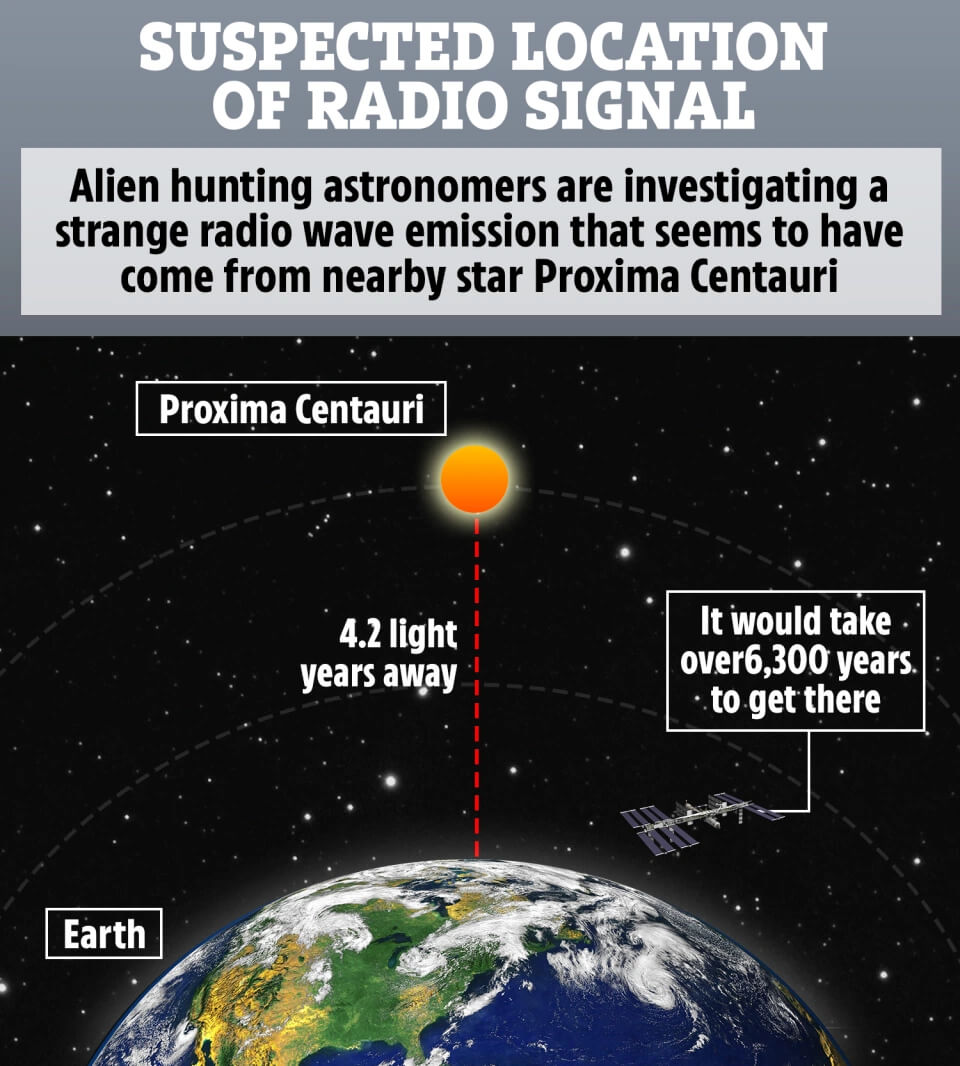 ALIEN hunting astronomers are investigating a strange radio wave emission that seems to have come from a nearby star.

Proxima Centauri is our Solar System’s closest star and is located just over 4 light years away.

With today’s current technology it would still take at least 6,300 years to get there, according to MIT estimates.

The star appears to have produced a narrow beam of radio waves that was then picked up by the Parkes telescope in Australia.

This was during 30 hours of observation work done by the telescope last year in April and May.

Scientists are still analysing the radio wave beam to try and workout what caused it.

Researchers working on the Breakthrough Listen Project, an initiative set up in 2016 to search for alien life, often notice strange blasts of radio waves.

However, all these outbursts so far have been attributed to natural sources or human interference.

That’s why the Proxima Centauri radio wave has so much interest because an explanation for it has not yet been found, although a man-made signal is still a likely cause.

Proxima Centauri is a red dwarf star and the beam associated with it hasn’t been detected again since.

According to The Guardian, an individual in the astronomy community who wanted to remain anonymous said the signal was a “serious candidate” in the search for alien life.

They reportedly said: ““It is the first serious candidate since the ‘Wow! signal’”.

The Wow signal was another radio signal picked up in 1977, which still doesn’t have a solid explanation.

The Breakthrough Listen Project continues to listen in on the million stars closest to Earth in the hope of picking up an alien broadcast.

Of the two planets that are known to orbit Proxima Centauri, one is thought to be in the habitable zone and could be rocky like Earth.

It’s called Proxima b and is thought to be 17% more massive that Earth and could potentially be the right temperature to have water on its surface.

However, it’s close proximity to the Proxima Centauri may mean that intense radiation and solar flares could have destroyed the planet’s atmosphere and left no hope for life as we know it.

It’s orbit means one side of the planet is always day and the other is always night.

Scientists are said to be working on a research paper covering all the possibilities about the mysterious signal.

Some experts are more skeptical about finding alien life than others.

Lewis Dartnell, an astrobiologist and professor of science communication at the University of Westminster, told The Guardian: “The chances against this being an artificial signal from Proxima Centauri seem staggering.

“We’ve been looking for alien life for so long now and the idea that it could turn out to be on our front doorstep, in the very next star system, is piling improbabilities upon improbabilities.

“If there is intelligent life there, it would almost certainly have spread much more widely across the galaxy.

“The chances of the only two civilizations in the entire galaxy happening to be neighbors, among 400bn stars, absolutely stretches the bounds of rationality.”

Despite this he did add: “But I’d love to be proved wrong.”