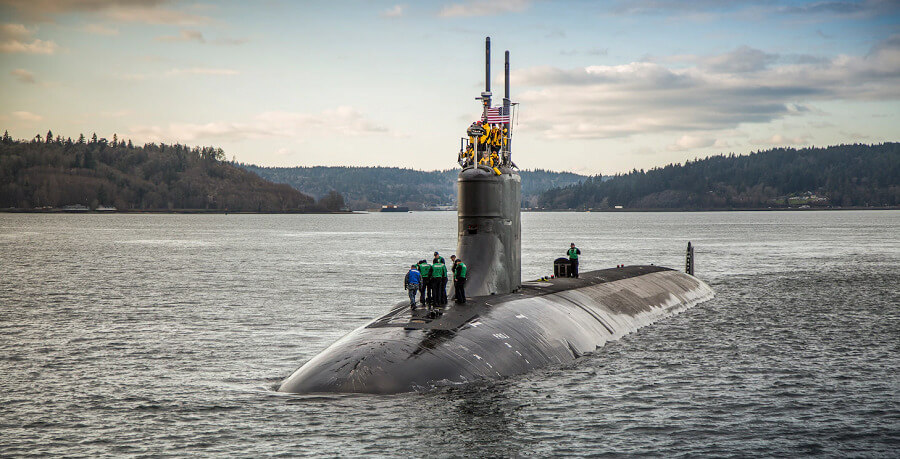 According to a statement released by the U.S. Navy on October 7th, the Seawolf-class fast-attack submarine USS Connecticut “struck an object while submerged on the afternoon of [October 2nd], while operating in international waters in the Indo-Pacific region.”

11 sailors were reportedly injured, although none of the injuries were life-threatening.

A Navy official speaking anonymously with the Navy Times said “that the area’s topography at the time did not indicate there was a land mass in front of the boat,” and furthermore, “there are also no indications that the mishap was hostile or that the sub collided with another vessel.”

Although, cautioned the official, information on the incident is preliminary at this point.

The official also said that while two crew members suffered moderate injuries, neither required evacuation from the boat, and the majority of the injuries were described as “bumps, bruises and lacerations.”

China has held a contested claim to the South China Sea for years and Chinese Foreign Ministry spokesman Zhao Lijian questioned the details of the collision, according to a transcript of the foreign ministry’s press conference on Monday.

“Such irresponsible attitude and stonewalling and cover-up practice only make the international community more suspicious of the U.S. intention and details of the accident,” Zhao said. “The U.S. side should take a responsible attitude, give a detailed account of what happened as soon as possible and make a satisfactory explanation to the international community and regional countries.”

Among Zhao’s demands were calls for the U.S. to clarify the location of the accident, disclose if there was any nuclear leakage, and assess if the crash will affect the fishing industry.

The demands came despite the U.S. Navy having stated in its original press release that “the submarine remains in a safe and stable condition. USS Connecticut’s nuclear propulsion plant and spaces were not affected and remain fully operational.”

Speculation on the nature of the object struck has already begun, with some wondering if it might have been one of the unmanned submersible vehicles recently developed by China to track enemy submarines and attack them with torpedoes.

Drones have been of increasing concern from a national security perspective following several 2019 incidents that went public this year regarding the military and UFOs.

The incidents in question began being reported in late March, when The Drive published an article on a series of “drones” or “UAVs” (Unidentified Aerial Vehicles) which were said to have pursued several U.S. Navy vessels in July of 2019. According to documents obtained through a Freedom of Information Act (FOIA) request, as many as six aircraft reportedly performed maneuvers over the Navy warships for prolonged periods in low-visibility conditions near a sensitive military training range less than 100 miles off Los Angeles. The incidents were reportedly investigated by personnel from the Navy, Coast Guard, and the Federal Bureau of Investigation (FBI), and received major attention, including that of the Navy’s highest ranking officer, the Chief of Naval Operations.

In a follow-up article for The Drive, Tyler Rogoway posited that a “very terrestrial adversary is toying with us in our own backyard using relatively simple technologies—drones and balloons—and making off with what could be the biggest intelligence haul of a generation.”

“Our team here at The War Zone has spent the last two years indirectly laying out a case for the hypothesis that many of the events involving supposed UFOs, or unidentified aerial phenomena (UAP), as they are now often called, over the last decade are actually the manifestation of foreign adversaries harnessing advances in lower-end unmanned aerial vehicle technology, and even simpler platforms, to gather intelligence of extreme fidelity on some of America’s most sensitive warfighting capabilities,” he wrote.

Some of the objects observed by military personnel have even reportedly had “transmedium” capabilities, such as submerging underwater from the air.

Officials within the U.S. Government take the encounters seriously enough to have commissioned the Office of the Director of National Intelligence to release a preliminary assessment report on UFOs last June, although, said the report, “The limited amount of high-quality reporting on unidentified aerial phenomena (UAP) [the current government nomenclature for UFOs] hampers our ability to draw firm conclusions about the nature or intent of UAP.”

Because of this, read the report, the Unidentified Aerial Phenomena Task Force (UAPTF) “concentrated its review on reports that occurred between 2004 and 2021, the majority of which are a result of this new tailored process to better capture UAP events through formalized reporting,” concluding that “most of the UAP reported probably do represent physical objects given that a majority of UAP were registered across multiple sensors, to include radar, infrared, electro-optical, weapon seekers, and visual observation.”

The report admitted that, “In a limited number of incidents, UAP reportedly appeared to exhibit unusual flight characteristics,” although “these observations could be the result of sensor errors, spoofing, or observer misperception and require additional rigorous analysis.”

The report ultimately concluded that UFOs “clearly pose a safety of flight issue and may pose a challenge to U.S. national security.”

Because of the challenges involved with data collection, “the UAPTF focused on reports that involved UAP largely witnessed firsthand by military aviators and that were collected from systems we considered to be reliable,” examining 144 reports from U.S. government sources. Of those reports, 80 involved observation with multiple sensors, and “most reports described UAP as objects that interrupted pre-planned training or other military activity.”

In addition, “The UAPTF holds a small amount of data that appear to show UAP demonstrating acceleration or a degree of signature management.”

However, “Additional rigorous analysis are necessary by multiple teams or groups of technical experts to determine the nature and validity of these data,” and the task force is “conducting further analysis to determine if breakthrough technologies were demonstrated.”

Update: The Navy’s investigation later concluded that the object struck was a geological formation.

“The investigation determined USS Connecticut grounded on an uncharted seamount while operating in international waters in the Indo-Pacific region,” said a 7th Fleet spokesperson in an emailed statement.