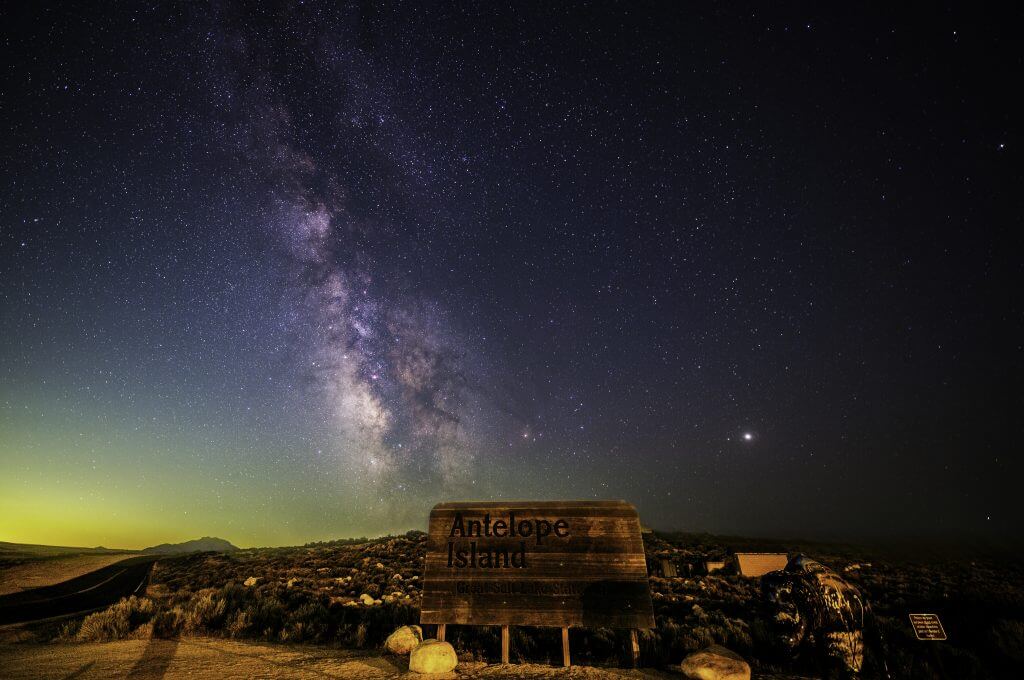 Dark Sky Park status means that these areas have gained worldwide recognition for their spectacular starry views and lack of light pollution. With amazing views of the Milky Way Galaxy and thousands of stars in our own backyard, here are some locations to add to your stargazing bucket list.

Natural Bridges Natural Monument: Named the first International Dark Sky Park in 2007, the Monument uses only lighting necessary for safety, according to the National Park Service. Stargazers can view up to 15,000 stars in comparison to 500 usually visible in brighter, urban areas.

Antelope Island State Park: Antelope Island was named an International Dark Sky Park in 2017. The park is surrounded by the Great Salt Lake and located just one hour outside of Salt Lake City.

Photos are from Utah’s Department of Natural Resources

Bryce Canyon National Park: The park hosts a 4-day Astronomy Festival each year that offers night sky guest speakers, workshops, and constellation tours. But if you can’t make the festival, the park has about 100 astronomy programs throughout the year run by Astronomy park rangers, including full moon hikes and solar viewing, where visitors can see thousands of stars and the Milky Way Galaxy.

Photos are from the National Park Service.

Arches National Park: Located far from urban areas and light pollution, Arches offers beautiful views of the starry night sky. Under the right conditions, park visitors can see Saturn’s rings with just a pair of binoculars, according to the National Park Service.

Cedar Breaks National Monument: Another International Dark Sky Park, Cedar Breaks is known for clear night skies and an amphitheater of stone structures. It is located at 10,350 feet above sea level and high enough above Cedar City to not be affected by light pollution, according to Visit Cedar City. Cedar Breaks also hosts attracts thousands of stargazers through hosting Star Parties and trained 35 Master Astronomers.

Capitol Reef National Park: This remote park offers views of clear, dark night skies, with its landscape above 7,000 feet. it was named an International Dark Sky Park in 2015. Rangers in the park may be available to provide telescopes and astronomical information, according to capitolreef.org.

Kodachrome Basin State Park: One of Utah’s newest International Dark Sky Parks, visitors to Kodachrome Basin can join constellation tours run by park rangers and use an available telescope to view galactic nebula’s and clusters, according to stateparks.utah.gov.