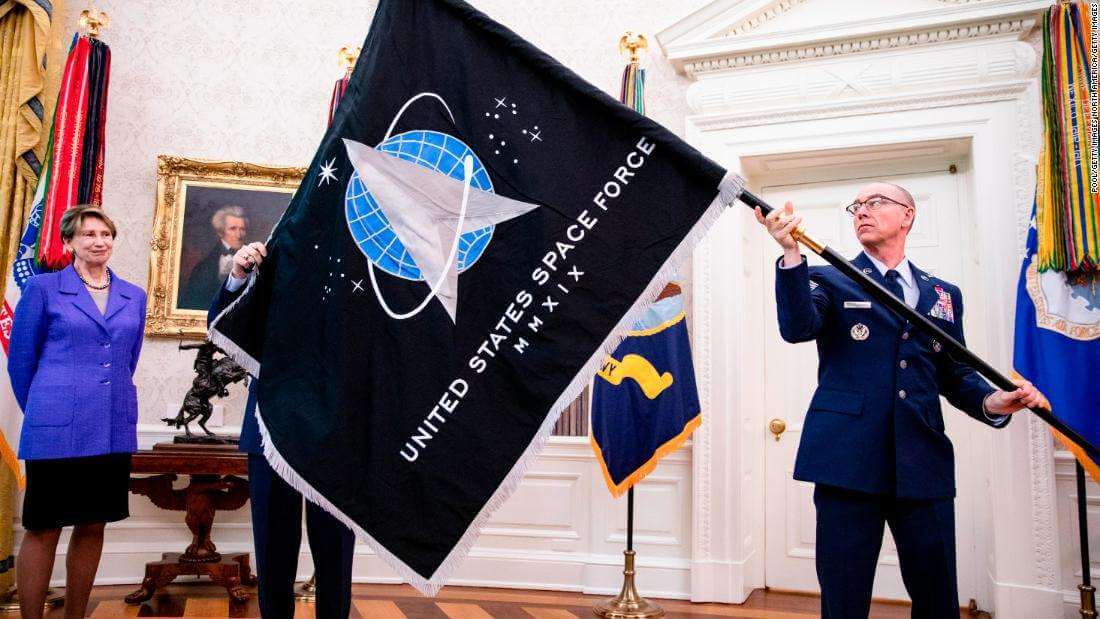 Defense leaders presented the flag of the Space Force to President Donald J. Trump today in the Oval Office. The flag of the newly created armed service will hang alongside those of the other military services at the White House.

“I just want to congratulate everybody and thank everybody,” the president said. “Space is going to be … the future, both in terms of defense and offense in so many other things.”

Defense Secretary Dr. Mark T. Esper called the presentation of the flag historic. “The United States has been a spacefaring nation for decades,” he said during the short ceremony.

The creation of the Space Force was necessary because adversaries have “weaponized” space, he said. Space is a warfighting domain. “The United States is now doing what it needs to do to protect our assets in space and ensure that space remains the heavens by which we not only protect America, but we sustain our economy, we sustain our commercial capabilities, we sustain Americans’ way of life,” Esper said.

Gen. John W. “Jay” Raymond, commander of the U.S. Space Command and the nation’s first chief of space operations, thanked the president for his support of the 16,000 space professionals assigned to the Space Force. Those men and women come to work every day focusing on providing space capabilities for our nation for joint coalition forces and for the world, Raymond said. “We’re proud of this flag. We’re proud to have an opportunity to present it to you here for display in the White House,” he said.

Air Force Secretary Barbara M. Barrett stressed the integral role space plays in everyday American life. “Most … Americans, before their first cup of coffee in the morning, have used space, but very few people realize how important space is to everything that we do,” she said.

“The U.S. Space Force is proud to present the official flag to the President of the United States, to our space professionals across the globe, and to the American public, thus establishing another piece of our culture,” said Lynn Kirby, the Space Force spokesperson.

The official flag of the Space Force is derived from key and central elements of the seal of the United States Space Force, she said.

Very Beautiful Flag . I am very proud of it and the symbol. We should all be proud our Country, who is watching over us up in the Heavens