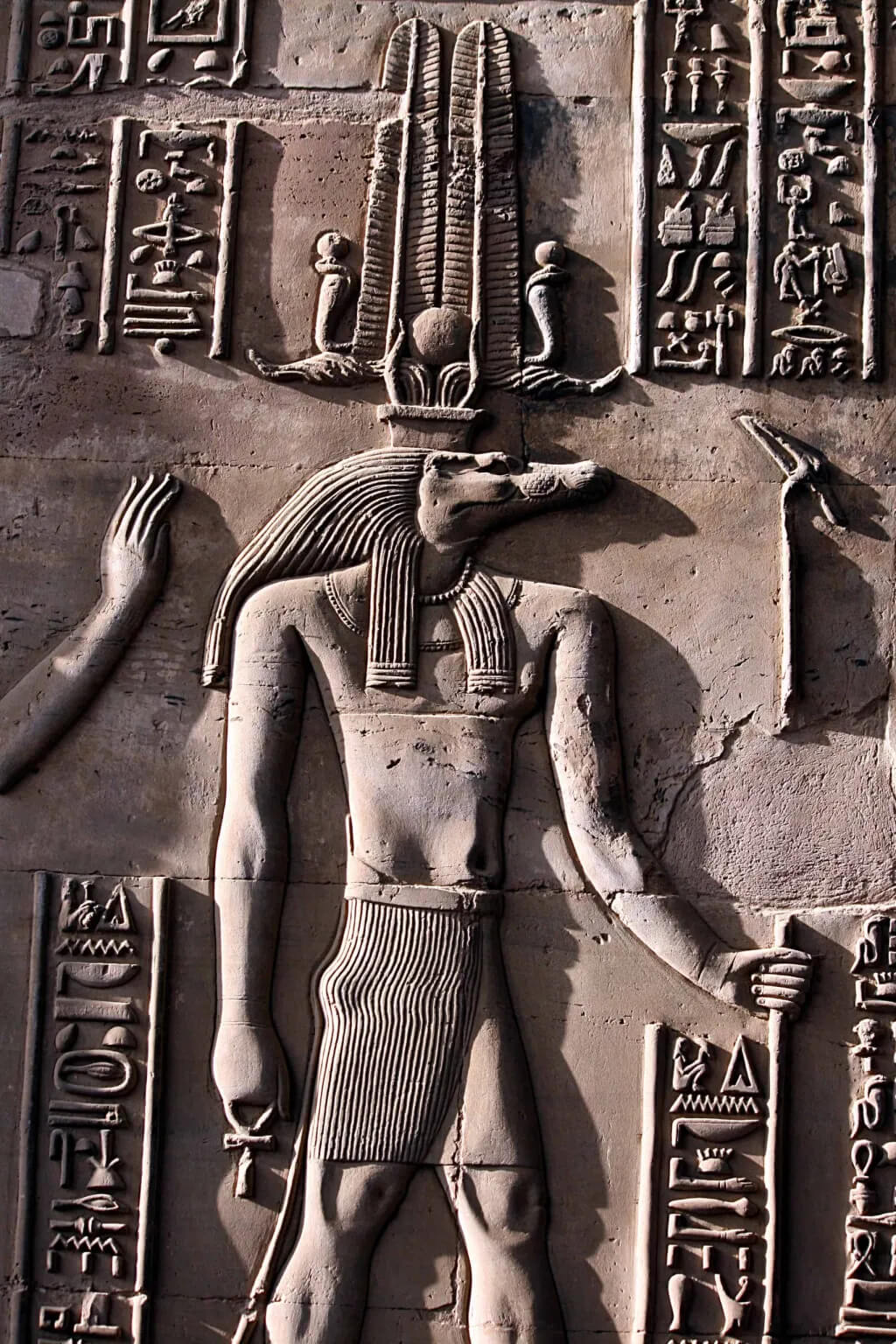 God Sobek is one of the oldest and main gods of the Egyptian pantheon. He was recognized not only as the ruler of the Nile and the lord of its floods, bestowing fertility and abundance but also as a deity, personifying time and eternity.

Sobek was a crocodile god, which, apparently, was perceived in Ancient Egypt as a kind of creature who could solve almost all everyday issues. His first appearance came from the sealing of the ruling period of King Narmer, the first king of a unified Egypt and the king of the first dynasty. He appeared as the son of Neith with the epithet “The Rager.”

The sealing shows crocodiles facing a distinctively shaped shrine that later became the symbol for the city of Shedet, (later Crocodilopolis) near Al-Fayyūm. The crocodile god in Ancient Egypt had his own cultural center Shedet. There, archaeologists found more than 2,000 mummified crocodiles, which were buried with special honors. In the Old Kingdom, Sobek was one of the significant gods of Egyptian religion and was frequently mentioned in the funerary Pyramid Texts. Despite the occasional literary references to Sobek, his prominence at that time was focused on his cult center at Shedet.

Crocodiles in Ancient Egypt were kept in excellent conditions. Gold jewelry was worn on animals as a sign of great honor and worship. The food of the crocodiles was carefully monitored by the priests of the temples of Sebek. After death, the corpses of crocodiles went through the process of mummification, then they were buried with great honors, as evidenced by numerous excavations. The caves where the embalmed crocodiles are located attract a large number of tourists every year.

The crocodile cult flourished in the era of the Middle Kingdom. At that time, many pharaohs necessarily included the name of Sobek in their names. It was believed that this greatly increases their strength and power. The mentioning of a crocodile is often found in Egyptian mythology, in particular, in the famous myth of Osiris. Sebek was considered the god not only of water but also of harvest and fertility. Indeed, it was during the flood of the Nile that new crocodiles were born. The image of some parts of the body of crocodiles is found even in hieroglyphic symbols.

Some myth says that the father of Sobek was Seth, the god of thunder and chaos, but he also had a close association with Horus. Horus took the form of a crocodile to find parts of Osiris’ body that were lost in the Nile. Sobek helped Isis when she gave birth to Horus. Despite the fact that the god was often depicted in the headdress of Amun, he had a close relationship with Amun-Ra and Seth, the main enemy of Osiris.

The inhabitants of Ancient Egypt believed that long before the appearance of the main gods Ra and Amun, there lived the Egyptian deity known as Neith who was considered as the goddess of the cosmos, fate, wisdom, water, rivers, mothers, childbirth, hunting, weaving, and war. She was sometimes shown nursing a baby crocodile which, according to some myths, is the God Sobek. He was depicted with a long, squat body of a reptile and with a human head. His tail was dark, while his eyes were light. It was the cruel and incorruptible Sobek, like the ancient Greek Hades, who guarded the gates to the underworld, from where there was no exit for dead souls.

Sobek was revered in Egypt as the god of the flood of the Nile, and the Nile gave Egypt not just water, but also the key to life itself. The floods of the Nile helped the Egyptians to reap large crops, and at the same time could wash away entire cities.

The ancient Egyptians ranked Sobek among the gods for a reason. They endowed the crocodile with magical abilities: the female crocodiles seem to know in advance how far the Nile will overflow the banks. They lay eggs before spilling, but their nests are always above the water level and are never flooded. Therefore, the farmers considered the crocodile a clairvoyant lord of the Nile.

In the main temple of Crocodilopolis, huge and sedentary Nile crocodiles were kept. On their necks and paws, they wore numerous pieces of jewelry made of gold and diamonds. Every day, special servants literally force-fed the reptiles with selected meat, bread, fresh fish, and even exquisite wine.

Nevertheless, the cult of the crocodile god Sebek can be traced to other areas of Ancient Egypt. For example, in Ambo and Ombi, originally called Nubt. There is a temple dedicated to Sobek, where a demonstration of crocodile mummies has been open since 2012.

1 thought on “Sobek: Lord of the Nile & Crocodiles”